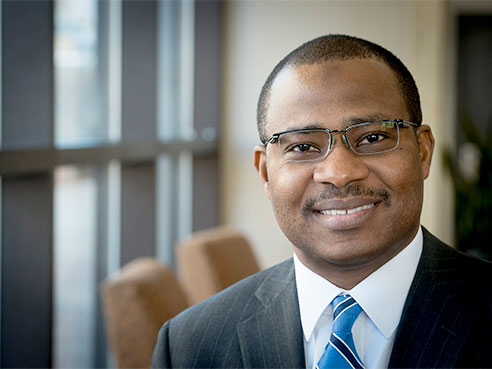 The University of Alabama at Birmingham graduate who led successful Ebola containment efforts in Nigeria has now been tapped to serve as an international expert on the disease.

Faisal Shuaib, M.D., Dr.P.H., head of the National Ebola Emergency Operations Center in Nigeria and a 2010 graduate of the UAB School of Public Health’s Dr.P.H. in International Health program, has been appointed to a six-person independent expert committee to evaluate the global response to the Ebola outbreak.

WHO Director-General Margaret Chan, M.D., MPH, commissioned the panel of outside independent experts to assess all aspects of WHO’s response in the Ebola outbreak. This is in response to a resolution passed during the Ebola Special Session of the WHO Executive Board in January.

“It is an honor to be part of this prestigious assembly of experts commissioned to do this important piece of work,” Shuaib said. “The panel’s report will hopefully add to the growing body of knowledge on how we can do a better job of confronting disease-causing agents that have proved to be tenacious, efficient and unforgiving.”

In a recent visit to UAB, Shuaib told students, faculty and staff that, although the Ebola outbreak in Nigeria is over, its impact on communities and the health system will not be forgotten.

“We still maintain a focus on the Ebola outbreak in other West African countries,” Shuaib said. “We continue to conduct active surveillance, perform screenings at our ports, and continually increase awareness about this disease.”

“We are all extremely proud of the groundbreaking work Dr. Shuaib is doing on behalf of global public health,” Michael said. “He brings honor and recognition to UAB and the School of Public Health while taking risks many cannot fathom to stop this century’s most frightening epidemic.”

Shuaib says the interim report will be presented to the 68th World Health Assembly by May 2015.

Other members of the expert panel include Professor Jean-Jacques Muyembe-Tamfun, director-general of the National Institute for Biomedical Research, Democratic Republic of the Congo; Dr. Carmencita Alberto-Banatin, independent consultant and adviser on health emergencies and disasters, the Philippines; Professor Julio Frenk, dean of the faculty, Harvard T.H. Chan School of Public Health, Boston, Mass.; and Professor Ilona Kickbusch, director of the Global Health Programme at the Graduate Institute of International and Development Studies, Geneva, Switzerland.