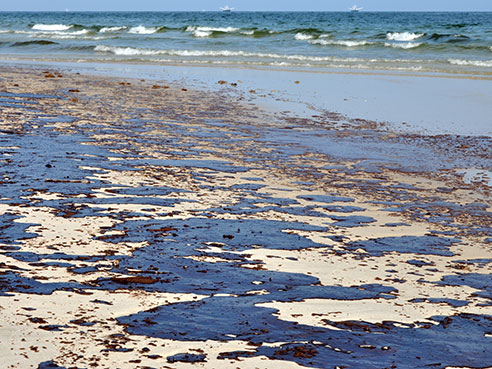 New research from investigators at the University of Alabama at Birmingham suggests that Corexit EC9500A, an oil-dispersal agent widely used in the Gulf of Mexico following the Deepwater Horizon oil spill, contributes to damage to epithelium cells within the lungs of humans and gills of marine creatures. The study also identifies an enzyme that is expressed in epithelial cells across species that has protective properties against Corexit-induced damage.

The investigators say that finding a way to boost or enhance that enzyme, heme oxygenase-1 or HO-1, could prevent lung damage in cases of exposure to oil dispersal agents in future. The study, published in PLOS ONE on April 2, 2015, looked at epithelium cells — the cells lining the airways of humans and the gills of certain marine species, in particular zebrafish and blue crabs.

The Deepwater Horizon spill, which began April 20, 2010, involved 205.8 million gallons of crude oil that spilled from a well head blow-out during the next three months. A dispersant, Corexit EC9500A, was used to degrade and break down the oil. A total of 1.84 million gallons of chemical dispersant was sprayed on the water or applied below the surface of the water.

“There were some 48,000 workers involved in the cleanup operations, and it is possible that workers were exposed to Corexit via inhalation,” said Veena Antony, M.D., professor in the Division of Pulmonary, Allergy and Critical Care Medicine and senior author of the paper. “Cough, shortness of breath and sputum production were among symptoms expressed by workers.”

The epithelium is a thin layer of cells that provides a continuous, critical and a highly regulated barrier to environmental insults. Inflammation of these cells can lead to a loss of integrity of the epithelium, causing an increase in permeability across the airway. Swelling of the airway with a corresponding reduction in airflow also can occur.

Sustained damage to this tissue also may lead to an inflammatory response in the epithelium, leading to obstruction of the airways in humans with exacerbation of pre-existing respiratory diseases such as asthma.

The study findings suggest that Corexit exposure caused oxidative stress to epithelium cells, leading to a breakdown in their ability to function as a barrier. The exposure also increased the frequency of apoptosis, or programmed cell death.

The body’s natural reaction to airway injury is the production of HO-1, an anti-oxidant and anti-apoptotic enzyme found in the epithelium, and increased production of an oxidant-generating enzyme, NADPH oxidase-4, or NOX4. NOX4 has protective properties in proper amounts; but if left unregulated, NOX4 can contribute to airway damage.

“Corexit exposure led to an increase in NOX4 activation, and there is evidence that the increase of NOX4 is tied to increased apoptosis,” Antony said. “On the other hand, HO-1 was also activated following Corexit exposure. We also noted that the introduction of HO-1 following injury served to remediate the effects of that injury.”

The research team studied zebrafish, housed in the Aquatic Animal Research Core at UAB, and blue crabs, obtained from Gulf Specimen Marine Laboratories, which were exposed to Corexit. The team also procured a cell line of human epithelium tissue cultures.

“In summary, our results indicate that respiratory epithelial surfaces across phylogenetic species are sensitive to injury by Corexit. However, the enzyme HO-1 protects against inflammation and cell death induced by Corexit,” Antony said. “Unfortunately, the likelihood of another oil spill is high, and the need to use dispersal agents will remain. We propose that upregulating HO-1 may offer a novel therapeutic approach for treating dispersant-induced injury and apoptosis by enhancing the antioxidant and anti-apoptotic ability of the epithelium.”

Funding for the study came from the UAB Environmental and Translational Medicine Program.