by Jeff Hansen
The protective effect is achieved by reducing acute inflammation in the spleen and the left ventricle of the heart. 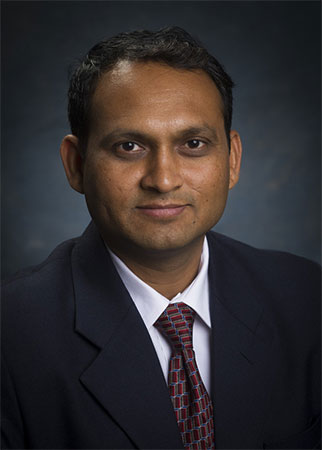 Ganesh HaladeChronic inflammation provokes a downward spiral in many diseases, including congestive heart failure, atherosclerosis and peripheral artery disease. A University of Alabama at Birmingham-led research team has now found that mice that are given the lipid “Resolvin D1” after experimental heart attacks have substantially reduced amounts of inflammation and heart failure.

“Thus, Resolvin D1 has the potential to delay heart failure but still requires long-term studies in order to prove its utilization in chronic heart failure management,” Ganesh Halade, Ph.D., and his study co-authors concluded in a Journal of Molecular and Cellular Cardiology article recently published online. “This paper is the first to show resolvin’s effect on heart failure,” said Halade, an assistant professor in the Division of Cardiovascular Disease, UAB Department of Medicine.

About 5.1 million people in the United States have heart failure, according to the Centers for Disease Control and Prevention. Heart failure contributes to one in nine deaths, and half of those with heart failure die within five years of diagnosis. The annual cost for health care, medications and missed work is about $32 billion.

Inflammation is the body’s immune system response to injury, such as the muscle cells that die in a heart attack. The early acute inflammation response is beneficial, removing dead cells and beginning repairs in the injured area. Lingering, ungoverned chronic inflammation, however, is harmful.

Resolvin D1 is naturally produced in the body as a metabolite of one omega-3 fatty acid that is especially present in fish oil. It and other resolvins have potent anti-inflammatory effects; the term was coined by one of the co-authors, Charles Serhan, Ph.D., of Brigham and Women’s Hospital, Boston. Resolvins are natural signaling lipids in the body; but in the mouse experiments, Halade and colleagues boosted the amount of Resolvin D1 by an injection three hours after experimental myocardial infarction.

All of these indicated reduced heart failure in the Resolvin D1-treated mice.

Besides this bottom-line proof of concept, Halade and colleagues did detailed experiments to find where and how the Resolvin D1 was working. “This is basic research to understand the mechanism of how the resolvin acts to change immune cell kinetics,” Halade said.

This included looking not only at the left ventricle — the major pumping chamber of the heart — but also at the spleen. One of the co-authors, Sumanth Prabhu, M.D., director of the UAB Division of Cardiovascular Disease, last year published a key Circulation Research paper showing that splenocytes — the immune cells stored in the spleen as part of the body’s early defense system — are intricately involved in the heart failure that follows an infarction, a blockage of the blood supply that kills heart muscle cells, in a mouse model. One of Prabhu’s lines of evidence was that adoptive transfer of the heart-failure splenocytes into healthy mice led to systolic dysfunction and heart “remodeling,” the cardiovascular disease term for harmful changes in shape, size and function.

Among the details in the Halade paper, the researchers found that Resolvin D1: 1) prevented early changes in the splenic reservoir, 2) reduced neutrophil density in the spleen and stopped neutrophil recruitment in the left ventricle, 3) increased the spleen levels of various resolving lipid mediators that help resolve inflammation, 4) stimulated macrophage clearance from the left ventricle to promote early resolution of inflammation, 5) stimulated the 5-lipoxygenase and lipoxin A4 receptor genes that aid wound healing after a heart attack, and 6) reduced extracellular matrix gene expression in the left ventricle.