by Bob Shepard
UAB was part of a promising international study of a combination therapy for patients with the most common cystic fibrosis mutation. 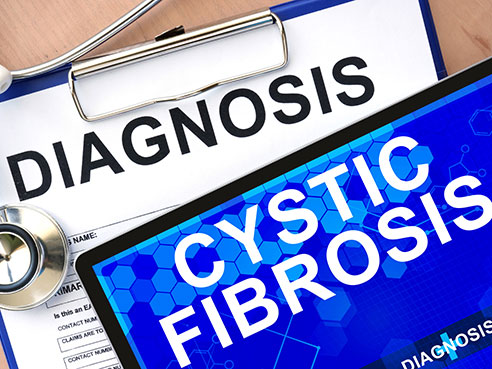 The combination of two drugs — an investigational drug used in conjunction with an already FDA-approved medication — improved lung function in patients with one form of cystic fibrosis, according to two new studies.

The findings, published online today in the New England Journal of Medicine, indicate the medications improve lung function in patients with the F508del mutation, the most common CF mutation. CF is caused by defective or missing CFTR proteins at the cell surface that result from mutations in the CFTR gene.

“Two studies, Traffic and Transport, looked at two medications developed by Vertex Pharmaceuticals Incorporated: lumacaftor and ivacaftor,” said Steven Rowe, M.D., professor in the Division of Pulmonary, Allergy and Critical Care Medicine at the University of Alabama at Birmingham. Rowe was a co-investigator of the international, multicenter studies. “The drugs have different mechanisms for action in CF and complement each other in this group of patients.”

Ivacaftor, which received FDA approval in 2012, is a ‘potentiator’ — or activator — of CFTR. It turns on ion channels at the cell’s surface, restoring more normal mucous flow. The investigational drug lumacaftor is a ‘corrector.’ It fixes a problem in protein folding that is particularly problematic for the F508del mutation.

“In patients with two copies of the F508del mutation, the CFTR protein is not processed — or folded — normally within the cell and generally does not reach the cell surface,” said Rowe. “Lumacaftor helps the protein fold properly, enabling it to reach the cell surface. Then, ivacaftor activates the protein, enhancing its function and, as a result, improving overall lung health.”

The Traffic and Transport studies followed 1,108 patients with the F508del mutation for 24 weeks. Compared to a placebo group, the findings show an improvement of between 2.6 and 4 percent in a measurement of lung function known as forced expiratory volume at one second, or FEV1.

FEV1 is the amount of air a patient can blow out in one second, measured by spirometry,” said Rowe. “We can assign a predicted value that a patient should be able to obtain based on age, height and gender. The improvement in the studies of up to 4 percent beyond their baseline value is a significant gain, particularly because it was associated with a pronounced reduction in CF pulmonary exacerbations and improved weight gain.”

The combination regimens were generally well-tolerated. The most common adverse events, regardless of treatment group, were infective pulmonary exacerbation, cough, headache and increased sputum.

“People with CF who have two copies of the F508del mutation lose nearly 2 percent of their lung function every year,” said Rowe. “These data show that lumacaftor in combination with ivacaftor provided a benefit for this patient group. It also significantly reduced CF-related hospitalizations, which hopefully will slow down the overall progression of the disease.”

Vertex has submitted regulatory applications for approval in multiple countries, including a New Drug Application in the United States. The Food and Drug Administration is expected to make a decision on the application this summer.

“These data mark an exciting day for the CF community and validate our more than 30-year commitment to developing medicines that target the underlying basic defect of cystic fibrosis for all people with this devastating disease,” said Robert J. Beall, Ph.D., president and CEO of the Cystic Fibrosis Foundation. “While we await the FDA’s review of these data, we’re grateful to the many people with CF, families and volunteers who have committed their time and resources to help accelerate our efforts to bring effective therapies to all people living with the disease.”

Cystic fibrosis is a rare genetic disease for which there is no cure. The defective function or absence of CFTR proteins in people with CF results in poor flow of salt and water into and out of the cell and affects a number of organs, including the lungs.

In North America,Europe and Australia, there are more than 22,000 people ages 12 and older who have two copies of the F508del mutation.

Rowe’s team conducted their portion of the Traffic and Transport studies through the Child Health Research Unit, a part of UAB’s Center for Clinical and Translational Science. Rowe is co-director of the unit.