by Bob Shepard
UAB researchers find a chemical pathway — a glutamate transporter — that may be causing seizures and shorten survival rates for patients with brain tumors. 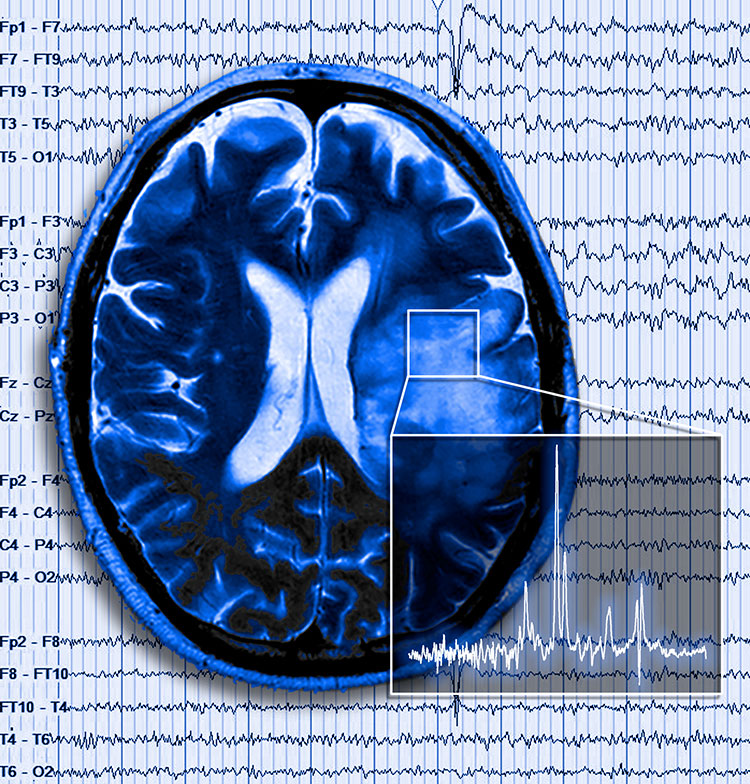 Researchers at the University of Alabama at Birmingham have identified a chemical pathway that may be associated with seizures and shorter patient survival in some patients with malignant glioma, the most common and deadly form of brain tumor. In findings published May 27 in Science Translational Medicine, the researchers suggest that a transporter known as SXC is responsible for boosting levels of glutamate in the brains of some glioma patients. 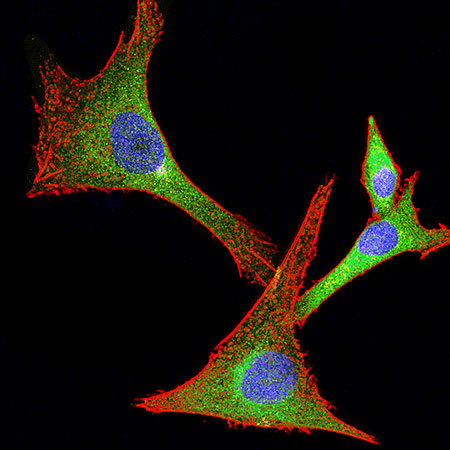 System x­c-(SXC) expression in human glioma cells growing in vitro. The catalytic subunit of SXC, SLC7A11/xCT (green) is highly expressed in approximately half of gliomas. The cell structure (red) and nuclei (blue) show the morphology of these glioma cells. Confocal image by Stephanie Robert and Ian Kimbrough.Glutamate is a vital neurotransmitter in the brain; but increased expression of glutamate can kill healthy cells surrounding a malignant tumor, giving the tumor more room for growth. Glioma-produced glutamate may also be responsible for seizures that are present in about half of all glioma patients.

“We hypothesized that the SXC glutamate transporter, and in particular a sub-unit called SLC7A11, was responsible for this increase in glutamate,” said Harald Sontheimer, Ph.D., professor in the Department of Neurobiology and senior author of the study. “In both animal models and in human glioma cells, we found that approximately 50 percent of patient tumors had elevated SLC7A11 expression, and those tumors grew faster, killed more healthy cells, induced seizures and shortened overall survival than did tumors lacking this transporter.” 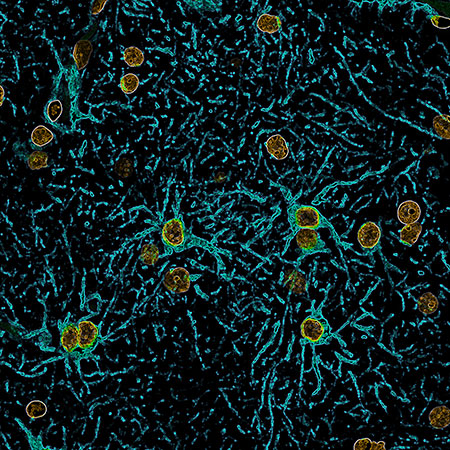 Human astrocytes expressing glial fibrillary acidic protein (GFAP, blue) and their nuclei (orange) in the brain of a patient suffering from seizures. Confocal image by Stephanie Robert and Ian Kimbrough. Analysis of human glioma tissue showed that 54 percent of glioma patients had elevated tumor SLC7A11 expression, whereas the remaining 46 percent had lower expression, comparable to controls. Gliomas with elevated SLC7A11 corresponded well with the incidence of tumor-associated seizures reported in the glioma patient population. The findings also showed that lack of SLC7A11 expression conferred an improved clinical outcome for patients, who lived nine months longer on average.

“These findings suggest that SXC is the major pathway for glutamate release from gliomas and that SLC7A11 expression predicts accelerated growth and seizures,” said Stephanie M. Robert, a graduate trainee in the M.D/Ph.D. program in Sontheimer’s laboratory and first author of the paper.

The team had previously discovered that an FDA-approved drug for ulcerative colitis and inflammatory bowel disease called sulfasalazine can inhibit glutamate release via SLC7A11. The researchers then conducted a clinical pilot trial with nine glioma patients. Using magnetic resonance spectroscopy, glutamate levels were measured before and after patients took an oral dose of sulfasalazine. 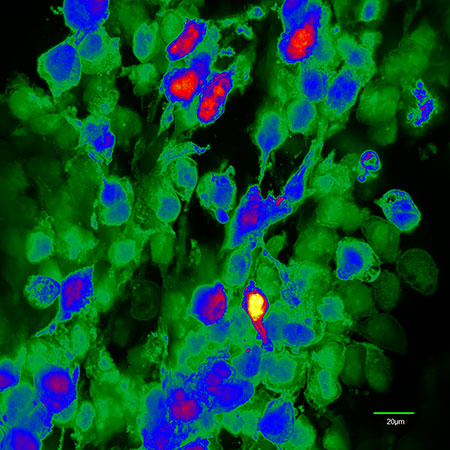 Spectral image of human glioma cells expressing enhanced green fluorescent protein (EGFP, green) growing intracranially in a mouse. Confocal image by Ian Kimbrough.“In the nine glioma patients with biopsy-confirmed expression of SXC, we found that the presence of SXC positively correlates with glutamate release, which is acutely inhibited with oral sulfasalazine,” said Sontheimer, who is also the director of the UAB Center for Glial Biology in Medicine.

While the study findings suggest that reducing glutamate levels in patients with elevated expression of SXC would be beneficial in controlling seizures and slowing tumor growth, sulfasalazine is an imperfect drug for that role.

“Sulfasalazine is approved as an oral medication, and most of each dose is absorbed in the gut. Perhaps as little as 20 percent makes it to the brain,” Sontheimer said. “It also has a very short biological half-life and quickly loses its effectiveness. More specific SXC inhibitors with improved specificity and bioavailability are under development and may soon enter clinical trials.”

Also of potential clinical relevance is the finding that magnetic resonance spectroscopy may serve as a tool to determine whether a patient has elevated tumor SLC7A11 expression. 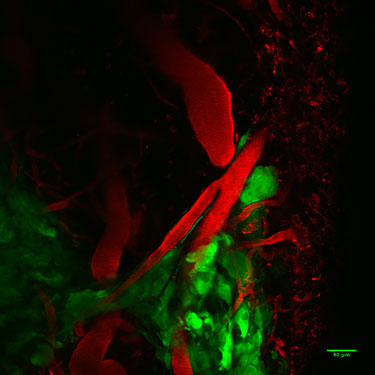 Human glioma cells (green) expressing enhanced green fluorescent protein (EGFP) migrating away from the tumor mass (bottom left of image) along the vasculature of the brain. Image acquired in a live mouse using two-photon microscopy. In vivo two-photon image by Ian Kimbrough“Future studies will be needed to examine whether SXC-mediated glutamate release measured by magnetic resonance spectroscopy may serve as a sensitive, noninvasive clinical marker to identify those patients who will experience more rapid disease progression and seizure complications,” Robert said. “This screening could also help identify patients who may benefit from therapies that target SXC inhibition.”

The wide-ranging study benefited from diverse UAB expertise in several fields. UAB’s neuro-oncology program, led by co-author Louis B. Nabors, M.D., professor in the Department of Neurology, was instrumental in conducting the clinical studies. Co-author Adrienne C. Lahti, M.D., professor in the Department of Psychiatry and Behavioral Neurobiology, brought expertise in magnetic resonance imaging from studies she is doing examining the association of glutamate with anti-psychotic drugs.