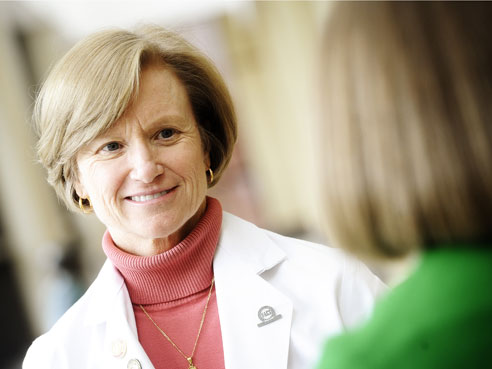 Holly Richter, M.D., says women of all ages suffer in silence with fecal incontinence, fearing accidents and restricting their daily activities, because of the embarrassing stigma around the condition and the lack of treatment options. But she believes the Eclipse System will encourage patients and physicians to start a new dialogue about bowel control.Physicians at the University of Alabama at Birmingham have enrolled their first patient in the LIBERATE Study, a national, multicenter clinical trial evaluating the long-term safety and effectiveness of the next generation of the Eclipse System for the treatment of fecal incontinence, a condition that affects more than 20 million women.

Holly Richter, Ph.D., M.D., director of the Division of Urogynecology and Pelvic Reconstructive Surgery, is the national principal investigator at UAB Hospital.

“Many women of all ages suffer in silence, fearing accidents and restricting their daily activities, because of the embarrassing stigma around the condition and the lack of treatment options,” Richter said. “The Eclipse System is the first of its kind, and presents new opportunities for treating women with bowel-control problems. We anticipate this new technology will encourage patients and physicians to start a new dialogue about bowel control, and we are looking forward to participating in such an important clinical study.”

The LIBERATE Study will further investigate the Eclipse System, the first vaginal insert designed to provide bowel control. The insert is placed in the same location as a tampon or a diaphragm, and can be removed at any time. A hand-held pump is used to inflate and deflate a balloon on the insert. The balloon is designed to occlude the rectum to protect against unwanted stool passage. The insert is nonsurgical, does not contain drugs or hormones, and is intended to offer women a nonsurgical treatment option.

The 12-month LIBERATE study is longer-term than the earlier LIFE study, which followed women who used an earlier generation of the Eclipse System for one to three months. The LIFE study found that most women experienced a reduction in accidents without major side effects; all device-related adverse events were mild or moderate.

Only 29 percent of women with FI report asking their physician about their symptoms. There are multiple causes for FI, making effective treatment particularly difficult. FI is often attributable to a history of obstetric damage to the pelvic floor, or functional problems such as diarrhea or irritable bowel syndrome. Current treatments include dietary modification, medications, biofeedback or surgery.

Richter says the Eclipse System is a much needed and novel approach for treating women with a devastating condition.

“Bowel-control problems are debilitating to a woman’s emotional health and quality of life,” Richter said. “Given the limited current treatment options, we are excited to be participating in this important clinical study.”

UAB Hospital is one of 15 centers in the United States selected to participate in the trial, which is expected to enroll 150 patients.