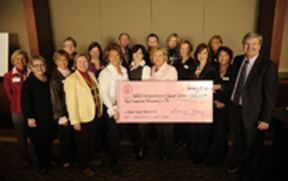 Since its inception in 1996, the BCRFA has made an annual donation to the Comprehensive Cancer Center with the proceeds from all its fund-raising efforts during the previous year, including sales of specialty breast-cancer license plates featuring a pink ribbon and the phrase "funding research in Alabama," BCRFA events and from the community. This year's contribution brings the Birmingham-based organization's cumulative total for UAB to nearly $3 million.

"Our friends at the Breast Cancer Research Foundation of Alabama have enabled our breast-cancer research program to become one of the most vigorous and well-regarded programs in the nation," said Edward Partridge, M.D., director of the UAB Comprehensive Cancer Center. "The foundation has been instrumental in making that progress possible. Their dedication is saving lives every day, and we are grateful for their steadfast partnership in the fight against cancer."

Half of the BCRFA gift will be used as the lead contribution in a fund-raising effort to establish an endowed chair in honor of Andres Forero, M.D., a UAB Comprehensive Cancer Center senior scientist, BCRFA board member and nationally recognized expert in breast-cancer research.

The foundation is designating the other half of its generous gift to support breast-cancer research in memory of three remarkable women who made significant contributions to the breast-cancer community during their lifetimes:

In their memories, and in the memories of so many others who have lost their fight against breast cancer during this past year, the BCRFA has set its highest ever fund-raising goal for 2011: $500,000.

The BCRFA was established in 1996 by Dolly O'Neal, a two-time breast cancer survivor and Bruce Sokol, whose wife, D.D., was undergoing breast-cancer treatment. Since then, the foundation has been a leader in raising critical research funds to support early projects that enabled the Cancer Center to receive additional, high-profile grants and recruit and retain world-renowned breast-cancer researchers.

The BCRFA provided pilot funding for key breast-cancer research, which led to the receipt and renewal of the Cancer Center's Breast Cancer SPORE (Specialized Program of Research Excellence), a five-year, $11.5-million grant from the National Cancer Institute. Their support also provided important pre-clinical lab testing that led to a $6.4-million Promise Grant from Susan G. Komen for a Cure and the Triple Negative Breast Cancer Foundation in 2009.