“Holy guanine, Batman!” Superheroes and genetic genius at the frontiers of science

Gene mastermind Shawn Levy, Ph.D., and his team at the HudsonAlpha Genomic Services Laboratory are helping UAB investigators — and researchers from around the world — crack the mysteries of life. 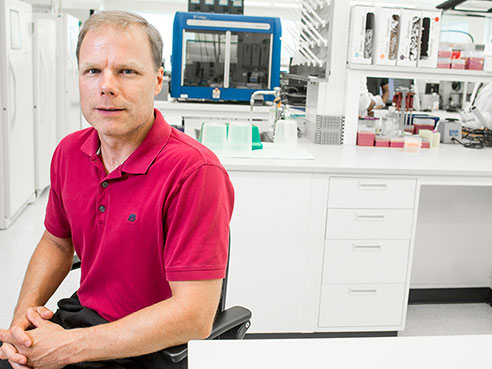 In a chilly room at Huntsville’s HudsonAlpha Institute for Biotechnology, a multi-million dollar band of superheroes is solving genetic puzzles from around the globe. In the hands of Shawn Levy, Ph.D., and his crack team of sequencing experts, these next-generation machines are a centerpiece of the UAB-HudsonAlpha Center for Genomic Medicine, which is tackling cancer, Parkinson’s disease and other top health threats. They have also helped make Alabama a global leader in genetic discovery.

Levy, the director of the HudsonAlpha Genomic Services Laboratory, and his team have worked with more than 500 principal investigators and samples from every continent, including Antarctica. Between September 2009 and February 2015, the GSL sequenced more than 5,000 whole genomes and processed more than 100,000 external samples. Those numbers are set to grow exponentially with the arrival of 10 Illumina HiSeq X Ten sequencers this spring. Per GSL’s custom, each of these units gets a nickname. The previous generation Illumina HiSeq 2500s, which are still in use, were named after Muppets. For the X Tens, the lab chose comic superhero characters, including Batman, Electra and Wonder Woman. The ultra-quick new machines generate so much heat that they required a customized new space at HudsonAlpha, cooled by industrial-strength chillers.

The GSL’s advanced gene-sequencing machines, and sterling reputation, attract plenty of business — apart from maintenance periods, they toil away around the clock. “Shawn does beautiful work,” says Haydeh Payami, Ph.D., who is using large-scale gene sequencing to find new ways to prevent and treat Parkinson’s disease. (See related article.) “The best sequencing comes out of HudsonAlpha. And HudsonAlpha is one of the few places in the country that has the X Ten and the expertise to use it effectively.”

Collaborative opportunities with HudsonAlpha, Levy and his team helped convince Payami to leave New York in 2014 and become the first faculty recruit to the UAB-HudsonAlpha Center for Genomic Medicine. 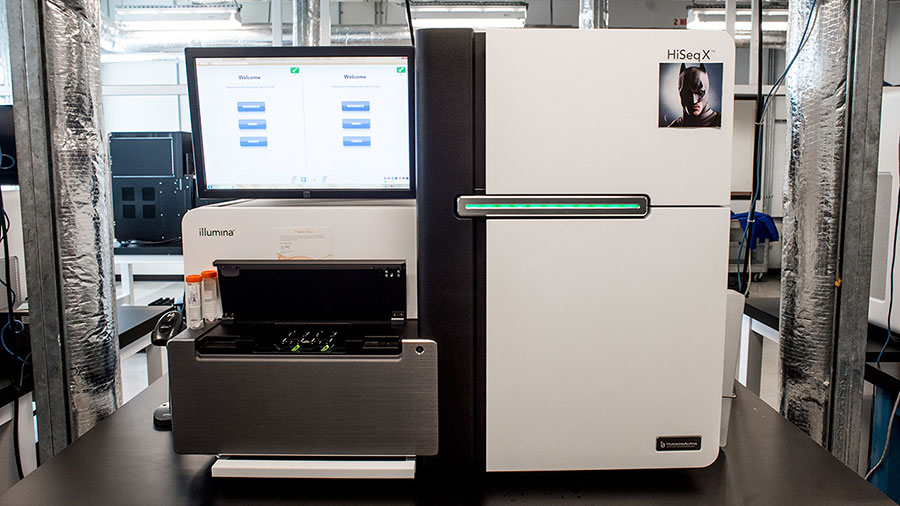 Levy, who is also an adjunct associate professor in the Department of Epidemiology at the UAB School of Public Health, and his team of expert scientists did all the sequencing on a blockbuster study of the New York subway that made national headlines last year. Researchers from Weill Cornell Medical College collected nearly 1,500 samples at New York’s 466 subway stations and sent them to HudsonAlpha for shotgun sequencing. “This was the first city-scale metagenomic profile,” Levy said. The lab detected more than 15,000 life-forms in those samples, and “almost half of the organisms we identified were unknown.”

Researchers for the study, known as PathoMap, also found that DNA data “correlates nicely with Census data,” Levy said, when they overlaid genetic predictions of ethnicity from samples collected at each stop with the actual population data from Census reports at those stops. The study proved that you can detect “humans’ molecular echo,” Levy added.

In a recent symposium for researchers interested in the Center for Genomic Medicine, Levy offered an overview of the remarkable advances in sequencing technology over the past decade. Ten years ago, he explained, the commercial gene-sequencing era arrived with the debut of the Genome Analyzer, which could sequence 1 gig abase of data per run. (That is, 1 billion base pairs; there are 3.2 billion base pairs in the human genome.) Today, the X Ten can sequence up to 1.8 terabase (1.8 trillion base pairs) per run. Only four other locations in the country have higher sequencing capacity than HudsonAlpha, Levy noted.

The massive amounts of data generated by next-generation sequencing machines “put a substantial challenge on infrastructure,” Levy said. Next-gen machines put such stress on the hard drives in their attendant computers that the drives have to be replaced three times per year. HudsonAlpha and UAB are subsequently investing heavily in increased data storage and processing capacity. “You can pretty quickly get to a calculation where it’s cheaper to resequence a sample later than to store its data long-term,” said Levy.

That’s just one aspect of the ever-changing sequencing landscape. “We do a lot of research and development on the tech side,” Levy said. The GSL team works closely with manufacturers such as Illumina to pioneer new hardware and techniques. “We’re always exploring the next thing,” he said. The lab is currently testing single-cell sequencing machines from multiple manufacturers. “Everything that has been done so far is based on averages” generated by sequencing genes from many different cells, Levy explained. For blood and other body systems, “the question is better answered that way.” But for the brain or immune system, for example, the ability to sequence cell by cell “has opened up new things,” Levy said. “We can tease apart what all the different cells involved are doing.”