A researcher in motion, chasing trials and trails 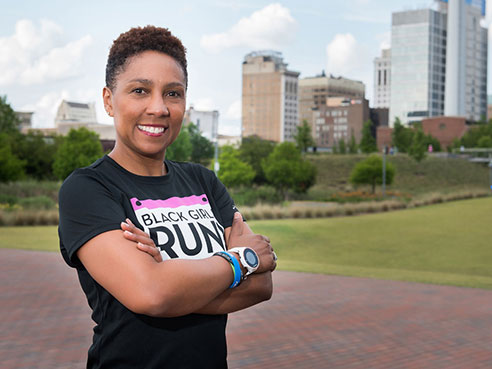 As a member of UAB’s Nutrition Obesity Research Center and Center for Exercise Medicine, Olivia Affuso, Ph.D., has a clear goal: preventing obesity and chronic disease through physical activity. During many of her evenings and weekends, she helps women and girls put these ideas into practice.

Affuso, an associate professor of epidemiology in the UAB School of Public Health, has developed a patent-pending, photography-based method that could change the way obesity interventions are measured. She is also a board member of the Birmingham Council of Girls on the Run, an international organization that uses running “to inspire girls to be joyful, healthy and confident,” Affuso said.

Girls on the Run Birmingham has served more than 1,000 girls in third through fifth grades at schools around the Birmingham area since 2011. The program, which combines group runs and lessons on everything from bullying to teamwork, “is for every girl,” Affuso said. “We use running as a creative, fun activity to help the girls learn to establish goals and healthy habits.”

Finding your own happy pace

During each Girls on the Run season, in spring and fall, Affuso and the group’s other board members “adopt” the teams at participating schools. Each team is led by volunteer teachers and coaches from the school; in spring 2015, there were 17 teams at 14 sites. Affuso usually volunteers for the long-distance treks, bringing a small token of appreciation for the coaches and a healthy snack for the students. “For the past few seasons, I’ve worked with a team in Sylacauga, and with the Boys and Girls Club team in Montevallo,” she said. “I am willing to drive wherever I am needed to support the girls.” At the end of each season, the teams gather for a 5-kilometer race. This spring, nearly 260 girls from the program completed their goal at Veterans Park in Hoover, along with friends and others from their communities.

Girls on the Run isn’t about competition, Affuso said: “Everyone is encouraged to go at her own happy pace.” When she runs on her own, Affuso pushes harder. Since taking up the sport as a master’s student at Georgia State University, she has steadily increased her mileage, completing her first marathon in 1999. In March 2014, she attempted her first 100-mile race, Alabama’s Lake Martin 100. Bad weather forced the vast majority of participants to drop out; Affuso made it 62 miles before stopping. However, she conquered the 100-mile challenge this past September at a race in Michigan, finishing in 29 hours and 17 minutes. Her goal is to complete a 50-kilometer trail race in all 50 states.

In her lab, Affuso is tackling another daunting challenge. In this case, the hurdles are technical — is it possible to use simple photos to accurately estimate a person’s body composition? Studies examining obesity interventions generally use body mass index (BMI) to determine whether participants are successful at losing weight. To measure BMI, all you need is a participant’s height and weight and a calculator. But this simple formula is also imprecise. People with lots of muscles may appear overweight, for instance, and those who are tall can appear normal or even underweight, when they actually have too much body fat. A much more accurate way to measure body composition is the DXA (pronounced dex-a) scan, but these expensive machines are not portable and aren’t widely available for clinical or field research.

Affuso had an idea for a better approach. Previous studies had shown that trained DXA technicians could accurately guess a person’s body composition before they were ever measured by the machine. Affuso wanted to see if she could mimic that judgment using digital photographs and some advanced computer algorithms. Her initial project was funded by Max Michael, M.D., dean of the School of Public Health, in the school’s annual Back of the Envelope Awards competition. After a successful pilot test with that funding, Affuso is now in the fourth year of a five-year, $2.5 million NIH study to test the idea at scale. The Photobody study is enrolling 2,000 men and women, ages 6–70. To help the computer detect body contours, men have to wear spandex shorts, and women wear shorts and a close-fitting top. Eventually, Affuso hopes to have the system work with minimal everyday clothes. (Learn more about the work in this UAB Magazine feature.)

“We know the process works,” Affuso said. “Now we’re breaking it down to questions like, How well does it work with women in a certain age group, or with different racial/ethnic groups?”

The power of nudges

Affuso recently launched a new technology-based study exploring movement and motivation. She is recruiting both college-age women ages 19–30 and girls ages 8–11 in order to study their responses to new wearable activity trackers, like the popular Fitbit bands. (Her study is using the MovBand, primarily because of its objective measurement of physical activity and long battery life, she says.) Affuso wants to know whether participants will actually use the devices in their daily lives. Then she plans to see whether the immediate feedback the trackers give on activity can help the women and girls stay more active. “What we want to do is reduce the amount of time they’re being sedentary,” Affuso said. “Even if someone exercises 30 minutes per day, if they spend the rest of the time being sedentary, they’re likely to have negative health effects.”

Affuso plans to create challenges that indirectly get participants to move regularly, “without saying explicitly, ‘You need to walk more’ or ‘You need to go for a run,’” she said. “It’s using the behavioral economics model of nudging.”

At the end of the workday, Affuso hits the trails — often in the company of runners from one of many groups in Birmingham. Since 2011, she has been involved with the national organization Black Girls Run, which encourages black women to run by building a safe, supportive community. She was one of the founding ambassadors of the group’s Birmingham affiliate, which was the first in Alabama. “We started with 10 people, and now we have more than 4,600 women on our Facebook page,” Affuso said. “We have at least seven opportunities to run during the week here in Birmingham,” she added, and there are also groups running in Anniston, Tuscaloosa, Huntsville and Montgomery. “The success of this group relies heavily on the tireless volunteers and dedicated runners,” Affuso said.

The members of Black Girls Run also help to support the Girls on the Run participants by serving as running buddies during the annual 5K race, or becoming “SoleMates” — raising money by asking people to sponsor them for a race. “It can be any running event,” Affuso said. For her SoleMate challenge, she chose the Leadville Marathon in Colorado’s Rocky Mountains, which involves climbing “to over 13,000 feet of lung-crushing elevation,” she said.

Charting a course to Birmingham

Affuso, who is originally from Orangeburg, South Carolina, earned a master’s degree in sports nutrition at Georgia State University and a Ph.D. in nutritional epidemiology at the University of North Carolina at Chapel Hill. “I was very interested in the interaction between diet and physical activity in the prevention of chronic diseases such as obesity and diabetes,” she said. “While at Georgia State University, I worked on projects with elite athletes as well as community-based interventions — both of which included a diet and exercise component.”

In 1999, as she started her doctoral work in Chapel Hill, Affuso met UAB’s David Allison, Ph.D., at a conference, and the two researchers kept up with each others’ work. In 2006, after Affuso finished a postdoctoral fellowship at the University of Miami, Allison invited her to give a seminar at the UAB Nutrition Obesity Research Center. “I had never visited Alabama and wasn’t thinking about moving here,” she said, “but once I came and saw the resources that UAB had available and the opportunity and the entrepreneurial spirit, it turned out this was a good place for me to be.”