by Jim Bakken
Southern favorites like fried chicken and bacon may taste great when consumed, but they can have negative effects on heart health, according to UAB researchers.

Previous research from the University of Alabama at Birmingham has shown regularly consuming the “Southern-style” diet of fried foods, processed meats, foods high in fat and sugar-sweetened beverages, can lead to an increased risk of stroke and an increased risk of death for chronic kidney disease patients.

Heart disease is the leading cause of death for both men and women in the United States, according to the Centers for Disease Control and Prevention, and the food you eat, along with the amount, is a risk factor. 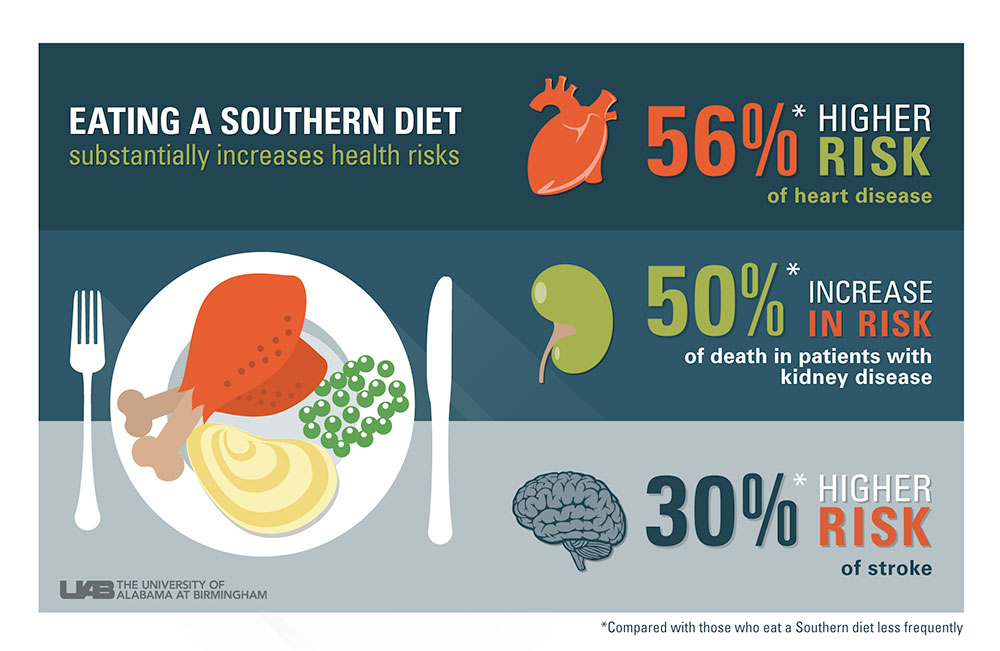 “People who most often ate foods conforming to the Southern-style dietary pattern had a 56 percent higher risk of heart disease compared to those who ate it less frequently,” said study lead author James M. Shikany, Dr.P.H., professor in the Division of Preventive Medicine.

Shikany says no other dietary pattern was associated with heart disease risk.

“I’m not surprised regular consumption of a Southern-style diet impacts heart disease, but the magnitude of the increased risk for heart disease was surprising,” Shikany said. “However, I was more surprised we didn’t see a protective effect of the plant-based dietary pattern.”

Participants with a higher consumption of the Southern dietary pattern were typically younger than 65 years, male and a resident of the Stroke Belt (Alabama, Arkansas, Georgia, Louisiana, Mississippi, North Carolina, South Carolina and Tennessee).

“For anyone eating a lot of the main components of the Southern dietary pattern, I’d recommend they scale back on their consumption,” Shikany said. “If you’re eating bacon every morning, maybe cut back to only two or three days per week, or if you’re drinking four glasses of sweet tea or several sugar-sweetened soft drinks per day, maybe reduce that to one a day and replace those with non-sweetened beverages.”

Shikany says making smaller dietary changes — rather than going all in all at once — are more likely to be adhered to.