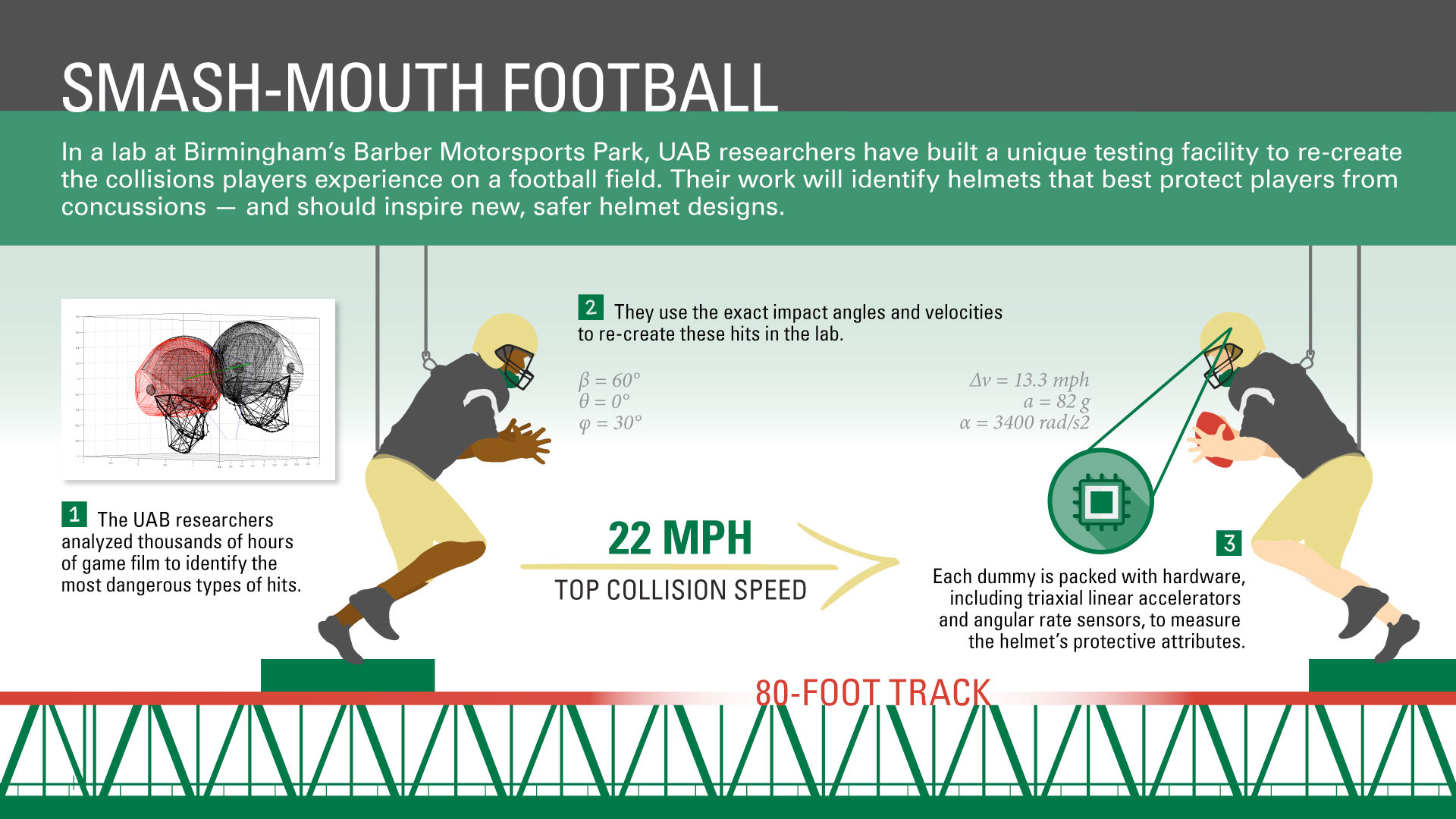 In a lab just off the racetrack at Birmingham’s Barber Motorsports Park, one of America’s foremost highway-safety experts is testing a new solution to football’s concussion problem: crash-test dummies. They’re the centerpiece of an effort by UAB’s Dean Sicking, Ph.D., inventor of a host of roadside protection devices and the SAFER barrier widely used in motorsports, to make football helmets safer as well.

Researchers across the country are trying to solve football’s brain-injury issues. Most are putting sensors such as accelerometers into existing helmets so coaches and medical staff receive early warnings of possible concussions. Sicking is taking a different approach. His plan is to improve the helmets themselves — starting with the testing process that allows them to reach players.

“Football helmets are designed to prevent skull fractures,” said Sicking, a professor in the Department of Mechanical Engineering in the UAB School of Engineering. That’s why the official testing standard, overseen by the National Operating Committee on Standards for Athletic Equipment (NOCSAE), involves dropping a helmet onto a metal platform topped with a hard rubber pad. “The problem is, football’s problem isn’t skull fractures,” Sicking said. “It’s concussions.”

Sicking, drawing on his experience in automotive safety, has created a unique testing facility to re-create football impacts and evaluate helmet performance. At its heart is an 80-foot railed track, with two dummies, dressed in football uniforms, facing each other on opposite ends. One dummy is fixed on a stage; the other races toward it on a moving sled. When they meet, the impact often makes observers flinch. “Some of these hits take your breath away,” said Blake Feltman, a research engineer working under Sicking on the project.

It’s no coincidence that Sicking’s solution relies on crash-test dummies. His entire approach draws on his successful effort to protect another type of sports figure: the racecar driver.

In 2001, after Dale Earnhardt’s fatal crash at the Daytona 500, NASCAR asked Sicking to design a safer speedway. Sicking already was well-known in the engineering world for his innovative roadside barriers, which have been credited with saving thousands of lives on America’s highways. After studying video footage of Earnhardt’s crash and modeling the forces involved, Sicking designed the SAFER barrier, a “soft” wall designed to dissipate the deadly forces created by an impact with a racecar. SAFER barriers were installed at all NASCAR tracks in 2002; since then, there have been no fatalities in the sport related to wall collisions.

A few years ago, Sicking turned his attention to football. He focused on the players’ main source of head protection: their helmets. In a helmet-to-helmet collision, the violent deceleration causes players’ brains to slam into their skulls. The key to safety is in dissipating the forces involved, Sicking says — and some helmets are better at this than others. But the current testing standards, he adds, aren’t designed to rank models in terms of protection. Each helmet either passes or fails.

The first step in creating a safer helmet, Sicking says, is to get a better understanding of the factors involved in helmet-to-helmet hits. His research team has spent two years analyzing high-definition footage from Division I college football teams. Specially trained undergraduates carefully log each helmet-to-helmet hit in detailed spreadsheets. Custom-designed software then goes to work on each collision, calculating the velocities of the players involved, the locations of impact on each player’s helmet and more. In a single team’s season, the researchers documented 4,700 helmet-to-helmet hits. They fully analyzed 400 of those impacts, in a process that can take up to three hours per hit.

When a dummy meets a dummy …

Sicking’s team is using these data to re-create the worst impacts with its dummies. The researchers start by manipulating the dummies into the positions they have evaluated on game film. Then they set their motorized sled to mimic the recorded velocities of those players. (Because only one dummy is moving, the sled moves at the rate of both players combined — if each is traveling at 11 mph in the game film, for example, the sled will move at 22 mph.) “The idea is to replicate the exact same impacts with different helmets,” Feltman said. 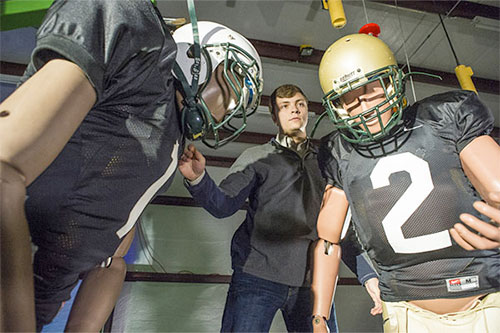 Blake Feltman readies dummies for collision. "Some of these hits take your breath away," he said.Not all of the hits are so dramatic, but that doesn’t mean they’re less dangerous. “Lots of the hits we’ve seen are lineman versus lineman,” Feltman said. “That is a high-frequency, low-velocity type of hit. We are setting up our tests to look at those, too.” Two of the team’s dummies are “50th percentile” models weighing 170 pounds — the same as the average American adult male. These dummies usually play the roles of wide receivers and cornerbacks. The other two are “95th percentile” models weighing 250 pounds each and play the roles of linemen. The researchers can add and subtract weight to make the dummies as heavy or as light as they would like.

Sicking believes that eventually there will be different helmets customized for the needs of different positions. “Linemen may take 10 to 20 hits per game, but at a relatively low speed,” he said. “A wide receiver may get only five hits per season, but they are much harder.”

Designing off the field

The researchers have settled on six different game scenarios — the most common, and the most dangerous. “We want to establish a testing standard that allows designers to create helmets specifically for these hits,” Sicking said. “We could take different designs from a manufacturer, run the tests on all types of hits and send the information to the manufacturer within a week.”

Right now, “manufacturers are basically having to test their designs on the field,” Feltman said. “They come up with a new design, and then if, over the following year or two, they see a lot of players’ having concussions, they will re-design the helmet. This facility gives us the ability to take that testing off the field, and determine a helmet’s performance up-front.”

Sicking proposes to establish a base standard that all helmets must meet, along with a “challenge” standard that would have even more stringent requirements. “That’s how we raised safety levels in the auto industry,” Sicking said. “Over a few years, the challenge standard becomes the new base standard, and quality continues to improve.”