by Bob Shepard
The Alzheimer’s plaques that accumulate around brain cells also congregate along the walls of blood vessels, according to UAB research, and that may contribute to cognitive issues.

Amyloid beta, the plaque that accumulates in the brains of people with Alzheimer’s disease, may also contribute to Alzheimer’s by interfering with normal blood flow in the brain, according to investigators at the University of Alabama at Birmingham.

In findings published Nov. 23 in the journal Brain, the team shows that when amyloid beta accumulates around blood vessels — where it is known as vascular amyloid — it appears to prevent the brain from properly regulating blood flow, which is essential to normal brain function.

“We have increasingly become aware that the disruption of blood flow in the brain can increase the risk of Alzheimer’s disease,” said Erik Roberson, M.D., Ph.D., associate professor in the UAB Department of Neurology. “While we have known that vascular amyloid built up around blood vessels, we did not fully understand its effects, and new technology now allows us to visualize how it affects the function of those vessels.”

Increased brain activity — remembering the lyrics to a song, for example — requires an increase in energy to the neurons responsible for memory. Neurons draw energy from glucose, which is transported by the blood stream. Cells called astrocytes regulate the diameter of blood vessels to increase or decrease blood flow and the corresponding glucose transportation. Astrocytes also tell the blood vessel to return to normal when the need has passed.

The fate of astrocytic endfeet in a brain tumor study published last year at UAB led the research team to look more closely at vascular amyloid. UAB researchers led by Harald Sontheimer, Ph.D., then a professor in the Department of Neurobiology, published a paper in Nature Communications in June 2014 which showed that, in brain tumors, malignant astrocytes called glioma cells could travel along blood vessels and push astrocytic endfeet away, severing their connection to the vessel and interfering with their ability to regulate blood flow.

“We know vascular amyloid accumulates around the outside of blood vessels, and after seeing those research findings from the Sontheimer group, we wondered if these plaques could be doing the same thing,” Roberson said. “Working with Dr. Sontheimer and his laboratory, we used advanced imaging techniques — including high-resolution, 3-D image reconstructions from multiphoton laser scanning microscopes, and sophisticated labeling and experimental techniques — and were able to determine that, yes, vascular amyloid did push the astrocytic endfeet away and interfered with normal regulation of blood vessels.” 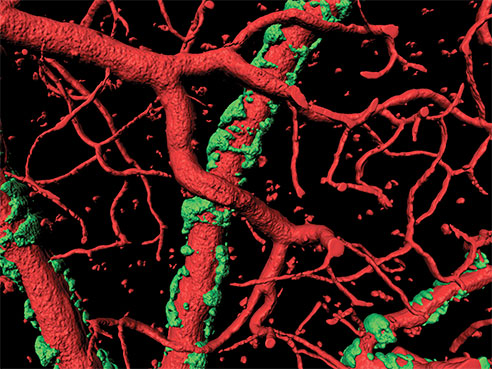 3-D microscope image of blood vessels (in red) with surrounding vascular amyloid plaques (in green). Courtesy Ian Kimbrough.“In a live animal model of Alzheimer’s disease, we then activated the vascular smooth muscle cells with a pulsed laser, allowing us to mimic neuron-induced astrocyte-vascular signaling,” said Ian Kimbrough, a graduate research assistant in Neurobiology and a collaborator on the original brain tumor study. “In locations where no vascular amyloid was present, we saw a very dramatic and robust vessel response; however, on blood vessels that were surrounded by plaque, we saw a much diminished response.”

Kimbrough says that UAB is one of the few research centers in the Southeast with multiphoton laser-scanning microscopes, instruments capable of capturing images deep into a living brain. These images can then be used to create three-dimensional, volumetric representations of brain morphology.

“Using this 3-D model, which we can rotate and manipulate,” he said, “we can see the exact spatial relationship between the vasculature, the astrocytic endfeet and the vascular amyloid. This allows us to analyze how these elements interplay in a normal, healthy brain compared to an Alzheimer’s disease brain.”

Roberson and Kimbrough say that, as the plaque buildup worsens, the vascular amyloid forms rings around the blood vessels, with bridges eventually linking one ring to the next. These rings form a rigid exoskeleton on the vessels, restricting their ability to change in diameter when increased blood flow is demanded by neurons.

“The vessel has to be able to expand and contract, to dilate and constrict, if it’s going to regulate blood flow,” Roberson said. “If they have become rigid like a pipe, instead of having a flexible wall that can go back and forth, then they cannot do their job of regulating blood flow to the brain properly.”

“This was among the first studies to really attempt to understand the relationship between vascular amyloid and blood flow in the brain,” he said. “For the first time, using the amazing technology at our disposal, we can see what is happening in the vessel walls in real time, to better understand how the presence of vascular amyloid effects the function of that vessel.”

Funding for the study came from the National Institutes of Health.