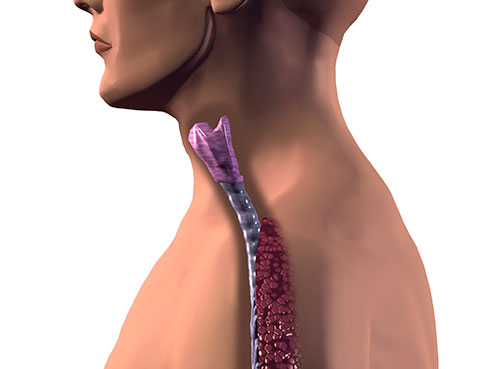 A phenomenon linked to smoking known as expiratory central airway collapse — or ECAC — may have a stronger connection to underlying lung disease than previously believed, according to new research findings reported today in the Journal of the American Medical Association.

The multisite team, led by researchers from the University of Alabama at Birmingham, suggests that ECAC, as measured by computed tomography scanning, is associated with poor lung function and respiratory symptoms. It may also be a valuable biomarker for impending or worsening lung disease.

While airway collapse sounds ominous, individuals with ECAC usually are not aware that it is happening. People with ECAC — almost always smokers or former smokers — have weaker airway walls and experience a flattening or collapse of the airway during expiration, the act of blowing out a breath of air.

People with a healthy respiratory system will see a slight contraction in the airway during expiration, but those with ECAC can experience a collapse of the airway of as much as 50 percent or more. After collapse, the airway does rebound to its prior shape in preparation for the next breath, leading many clinicians to believe that the collapse — while troubling — is not particularly dangerous.

“It has long been thought that ECAC did not contribute to poor lung function or respiratory symptoms,” said Surya Bhatt, M.D., assistant professor in the Division of Pulmonary, Allergy and Critical Care Medicine at UAB and lead author of the study. “But the actual effects of ECAC had never been studied well, and its prevalence and clinical significance were unknown.”

Bhatt, his UAB colleagues and investigators at six other institutions examined 8,820 subjects who were current or former smokers. They performed two chest CT scans that included the trachea, one during inhalation and a second during expiration. Five percent of the study subjects were observed to have ECAC.

The subjects with ECAC were compared to those who did not have the condition. The study’s primary outcome was respiratory disease-related health impairment and quality of life, which is measured using the St. George Respiratory Questionnaire. Researchers also looked at secondary outcomes such as shortness of breath, exercise capacity and the frequency of respiratory exacerbations such as cough and difficulty breathing that required treatment with steroids and/or antibiotics. In all categories, subjects with ECAC fared worse than subjects without ECAC.

“Based on these multiple analyses, we conclude that the presence of expiratory central airway collapse is in fact associated with worse respiratory quality of life,” Bhatt said.

Bhatt says the patients with lung disease, including COPD and emphysema, often have symptoms, such as shortness of breath, that are not easily explained by their disease. This is also true for smokers who do not have COPD based on lung tests.

“It’s possible that ECAC might be a contributing factor to these sorts of unexplained symptoms,” he said. “It could prove to be a biomarker, or predictor, of adverse respiratory events in this patient population. As the use of CT scans to assess lung disease increases, monitoring ECAC in the appropriate patient group could be extremely valuable to clinicians.”

“This is a new finding and merits further investigation to determine whether ECAC represents a continuum of peripheral airway inflammation along the central airways, or is an independent cause of respiratory decompensation,” Bhatt said.

There are surgical and endoscopic therapies that might prove beneficial in the treatment of ECAC, but Bhatt says additional work must be done to evaluate those therapies and determine the most appropriate candidates for therapy.

The study was funded by the National Heart, Lung and Blood Institute, part of the National Institutes of Health, and the COPD Foundation. All of the study subjects were participants in the COPDGene® study, one of the largest studies ever to investigate the underlying genetic factors of chronic obstructive pulmonary disease.