Are zoo elephants too fat, too skinny or just right?

by Adam Pope
UAB’s Daniella Chusyd has received another grant to study body composition in elephants. 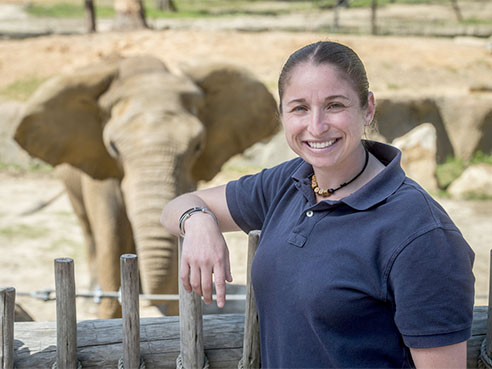 Daniella Chusyd, a doctoral student in UAB’s Department of Nutrition Sciences and fellow in the Nutrition Obesity Research Center, has received a grant from the Smithsonian’s Scholarly Studies Awards for Science to study body composition in Asian elephants.

Chusyd will work with Janine Brown, a reproductive physiologist at the Smithsonian Conservation Biology Institute.

Chusyd launched a study in 2014 looking at obesity and infertility in African elephants in American zoos. In the new study, Brown and Chusyd will look at the association between fat and fat distribution, and how it is associated with metabolic and reproductive hormones and physical activity levels. Female Asian elephants in zoos across the U.S. and in tourist camps in Thailand will be used in the study.

“It appears that Asian elephants under human care are heavier; but we don’t know to what extent, if any, it has on the elephant’s overall health,” Chusyd said.

Body composition in elephants is a relatively new field, and Chusyd is eager to see what their study will yield. She says, with elephants in the wild continually threatened by diminished habitat, poaching, war and political instability, zoos may provide the last bastion for preserving the species.

“The tools we will be using will help us learn more about elephant physiology in general and can further the field as it pertains to the overall health, reproduction and movement of the animals,” Chusyd said. “Simply, we want to improve upon what we already know.”

Chusyd and Brown will use several different body composition techniques to assess fat distribution, and rely on blood samples and body measurements collected by zoo workers for analysis.

This is the second study on body composition in elephants for which Chusyd and Brown have received funding, and the first from the Smithsonian. Chusyd hopes to begin heading to zoos late this summer.