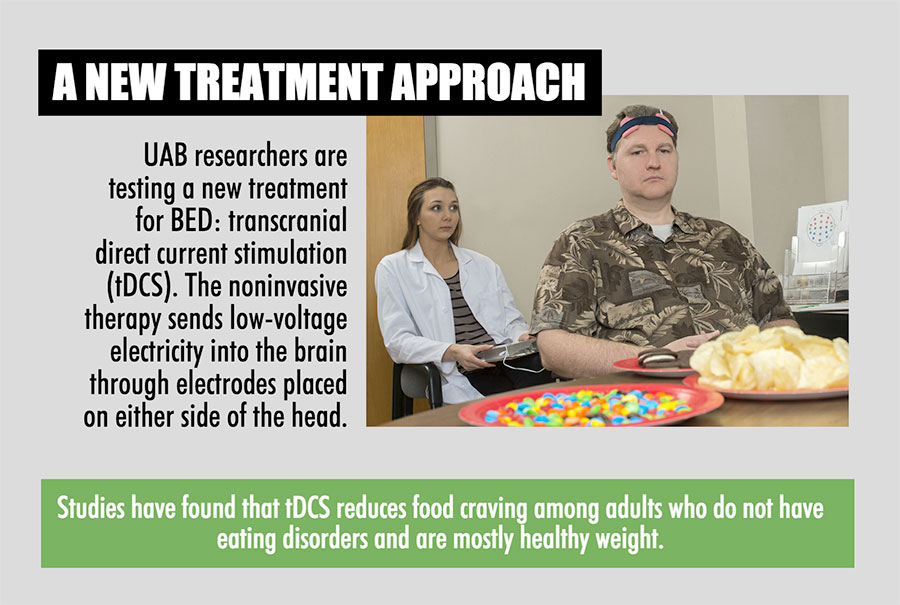 Transcranial direct current stimulation, or tDCS, has proved effective for binge-eating disorder for the first time, according to researchers at the University of Alabama at Birmingham.

tDCS is a type of neuromodulator that delivers constant, low-current electricity to a targeted portion of the brain. While it has been tested and proved effective for many disorders and health issues, including depression, Parkinson’s disease and autism, this UAB study is the first to effectively prove its potential as a treatment in patients with binge-eating disorder, or BED.

The American Psychiatric Association classifies BED as an eating disorder characterized by recurrent episodes of binge eating, which is eating large quantities of food in a short period of time with a sense of loss of control to stop. Binges are followed with feelings of shame, disgust and distress. Unlike bulimia, there is no purging to counter the calories from binge eating. Obesity is very common among those with BED.

Approximately 5 percent of the U.S. adult population suffers from a lifetime prevalence of BED, with an additional 1.2 percent with sub-threshold BED and 4.5 percent with binge-eating tendencies. 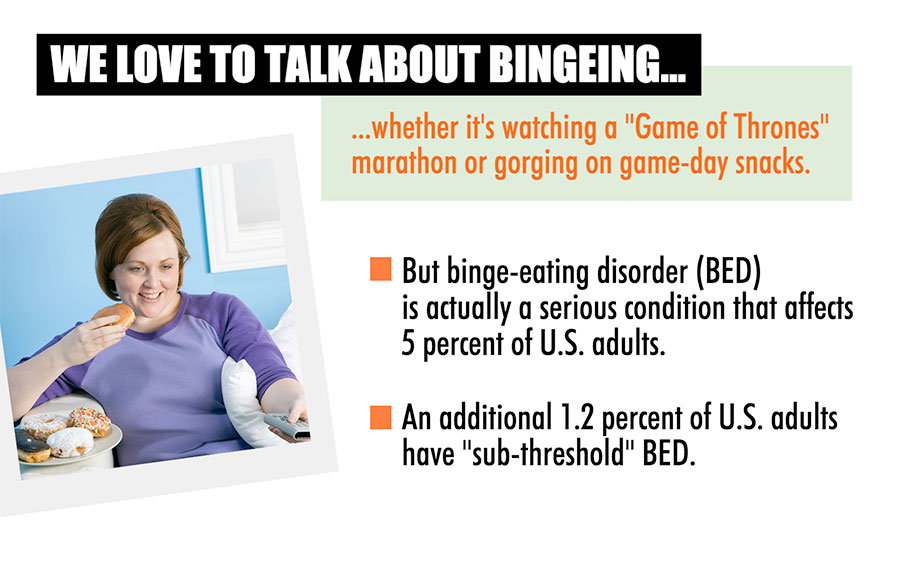 "There are more adults suffering from BED than are suffering from anorexia nervosa and bulimia combined," said Mary Boggiano, Ph.D., an associate professor in the UAB College of Arts and Sciences' Department of Psychology and principal investigator on the study, which was published in the International Journal of Eating Disorders today.

Currently, cognitive behavioral therapy, or CBT, is the best treatment for BED. However, CBT is not perfect, and there are many patients who relapse after treatment. Pharmaceutical treatments for BED are often ineffective and can have many negative side effects.

Frank Amthor, Ph.D., a professor in the UAB Department of Psychology with a background in engineering, knew about tDCS and suggested it to Boggiano as a treatment that could possibly alleviate obesity. TDCS studies were showing that it reduced depression and food craving, but in normal-weight and non-eating-disorder populations.

"We knew that a substantial percentage of BED patients also suffer from depression," said Emilee Burgess, the lead graduate student of the study. "With that information, we hypothesized that we might be able to use tDCS, which had been found to decrease depressive symptoms, to positively impact certain factors that contribute to BED, such as food craving, intake, binge-eating desire and binge-eating frequency."

The team from UAB tested 30 adults — both male and female — with BED or sub-threshold BED with a 20-minute session of tDCS targeting the right dorsolateral prefrontal cortex for stimulation. They also administered a "sham" session in which the individuals were hooked up to the tDCS device but did not actually receive stimulation, to control for possible placebo effects.

"We targeted the right dorsolateral prefrontal cortex because this area is underactive in patients with BED," Boggiano said. "Underactivity in this area of the brain is associated with decreased cognitive inhibition and ability to regulate emotions. This could explain the loss of control when craving food — a very emotional state — and loss of control when eating food in BED. Therefore, stimulating this region might lessen their impulsiveness toward food."

On the first two visits, participants were instructed to forgo eating or drinking anything but water for three hours prior to the visit, but to eat "some food" three hours before the visit to avoid excess hunger. Participants were measured for BMI and completed a battery of questionnaires at the beginning of each visit. They then completed a food craving test, which presented them with 24 food images representing desserts, non-sweet carbohydrates and savory protein categories immediately before and after the tDCS and sham sessions. Each food was rated on degree of “liking” and "wanting" with a 0-4 scale.

Next, participants were left alone for an eating test. For 20 minutes, they could consume as many M&Ms, potato chips and mini Oreo cookies as they wished. 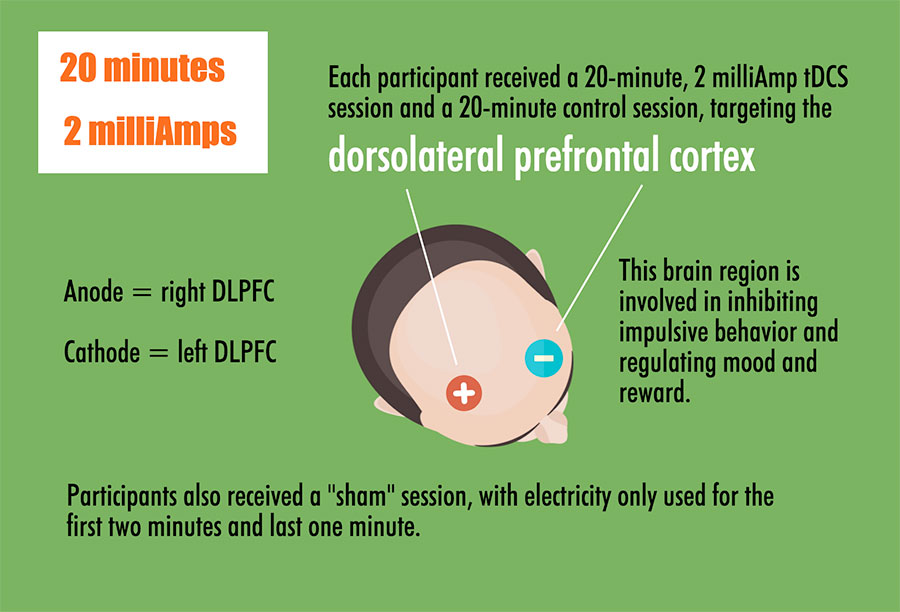 Participants were also instructed on how to access and submit a five-day at-home binge-eating survey. The same procedures were repeated during the second visit, but with the alternate tDCS, or sham, condition. On the third visit, participants ranked their preference for the foods available during the eating test, were debriefed on the full purpose of the study and were provided a brochure of resources for help with BED.

The results showed that tDCS decreased craving for sweets, savory proteins and an all-foods category significantly more than did sham. The strongest reductions occurred in the men. In both sexes, tDCS decreased total food intake by 11 percent and the individuals’ preferred-food intake by 17.5 percent of their intake during the control sham session. It also reduced desire to binge eat in men on the day of tDCS compared to sham administration. The reductions in craving and food intake were predicted by eating palatable food less frequently for reward motives, and by a greater intent to restrict calories, respectively, both traits which were measured with surveys at the onset of the study.

“It’s particularly significant that men had a greater impact from the tDCS treatment,” Burgess said. "Men make up a greater percentage of BED patients than they do comparatively in any other eating disorder, and males are often excluded from research studies, so it’s helpful to know this type of treatment might be particularly effective for that population."

The results provided “proof-of-concept” as to the safety and efficacy of tDCS to treat BED. The participants reported no negative side effects, other than slight itching from the electrodes during stimulation. This proof-of-concept study will now allow Boggiano’s lab and others to test the effects of multiple tDCS sessions, which should induce "neuroplasticity," more permanent beneficial changes in the brain.

"Our findings show that tDCS has promise as a safe, easily administered and effective tool in treating BED," Boggiano said. "We could see this treatment working in conjunction with CBT and other cognitive-based treatments to shorten the treatment course of BED and decrease relapse rates. We also believe it will substitute drug treatments for BED because of the low — if any — side effects of tDCS even with multiple sessions."

"Now that we know tDCS has a real impact on BED, the next step is to test longer-term sessions to determine effects over time," Burgess said. "This was our proof-of-concept study, and it was highly successful in our view; but there is more work to be done to begin using this treatment to help BED patients. That’s what we’re looking forward to next." 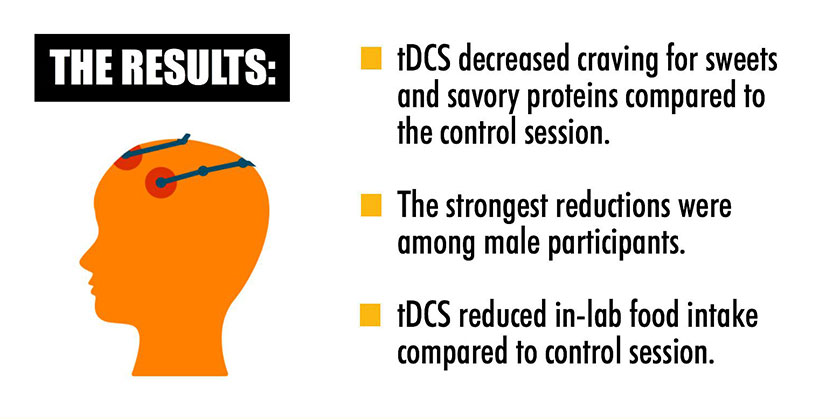