After 30 years at UAB, VP Marchase announces plans to retire

by Jim Bakken
Longtime VP for Research and Economic Development Richard B. Marchase, Ph.D., plans to retire at the end of 2016. During his tenure, UAB annual research expenditures grew from $331 million to $510 million. 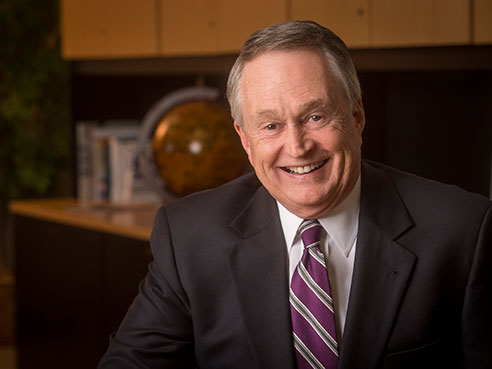 University of Alabama at Birmingham Vice President for Research and Economic Development Richard B. Marchase, Ph.D., will retire at the end of 2016 after three decades of service to UAB students, faculty and staff that influenced the institution’s growth, economic impact and world-changing advancements in research. A national search to fill the position will begin in the coming weeks.

Marchase joined UAB in 1986 as associate professor of cell biology and anatomy, and has since held titles including professor, chair, associate dean, vice president and interim president.

“UAB is a very special place with tremendous people and promise,” Marchase said. “This institution and its students, graduates, faculty and staff have made transformational contributions to this city, our nation and the world, and even greater accomplishments are coming. It has been an honor to be a part of that for three decades, and — even though I plan to retire — I will always be a Blazer.”

During his tenure as VP, UAB annual research expenditures grew from $331 million to $510 million, and UAB’s federal funding from the National Institutes of Health increased during a time when many institutions absorbed extreme declines. These increases contributed to UAB’s annual economic impact in Alabama that now exceeds $5 billion.

Marchase has championed research initiatives across the enterprise that have significant financial implications, as well as broad, long-lasting and impactful influence in Alabama and beyond.

In 2015, the NIH awarded the UAB Center for Clinical and Translational Science $33.59 million over four years to continue the center’s programs advancing translational research. Robert Kimberly, M.D., directs the CCTS.

“Dr. Marchase knows the importance of research universities’ translating discoveries and advancements into real-world applications that make a difference in the hands of the people who need them,” Kimberly said. “He has worked tirelessly to foster an environment in which our researchers can succeed.”

Marchase has also advanced strategic business, governmental and academic partnerships that support UAB research efforts, and he oversaw the launch of the Alabama Drug Discovery Alliance that is working with Southern Research to move promising treatments and cures for some of the most serious diseases facing the world closer to patients.

In 2013, Marchase collaborated with campus leaders to launch the Bill L. Harbert Institute for Innovation and Entrepreneurship to serve as the nexus for UAB innovation, entrepreneurial educational models, applied research, management of intellectual property and an entry point for industries seeking to collaborate with UAB.

UAB President Ray L. Watts says Marchase has built up a solid foundation on which UAB research and economic development efforts will grow.

“Dr. Marchase has helped UAB and our leadership look into the future of research and build important infrastructure, as well as recruit and retain world leaders in their respective research fields,” Watts said. “He has been a consistent and effective advocate for UAB research and economic development.”

Kathy Nugent, executive director of the Bill L. Harbert Institute for Innovation and Entrepreneurship, says Marchase’s legacy is also seen in the successful careers of countless UAB students and graduates who benefit from access to early research opportunities with faculty mentors.

“UAB provides undergraduates rich opportunities to get involved in research that most institutions offer only to graduate students, if at all,” Nugent said. “Building world-class research facilities and programs is part of that, and so is empowering the next generation of scientists to find early success that can be sustained. Dr. Marchase’s influence in this area has solidified our reputation as a place that supports that success.”

Marchase joined UAB in 1986 as associate professor of cell biology and anatomy and was named professor of cell biology in 1990. Later that year, he became chair of that department, a position he held until 2000, when he was named associate dean for Biomedical Research for the UAB School of Medicine. Marchase was named vice president for Research in February 2005, having served as acting vice president for Research for six months. Over his UAB career, he helped lead over 30 research and infrastructure grants and contracts totaling approximately $40 million. In 2007, Marchase’s responsibilities expanded to include business development for the university research enterprise. He served as UAB’s interim president from August 2012 to January 2013.

Marchase has been active in a host of national organizations, including the Association of American Medical Colleges and the Association of Public and Land-grant Universities (APLU). He served as president of the Association of Anatomy, Cell Biology, and Neurobiology Chairs and as both president and vice president for Science Policy of the Federation of American Societies for Experimental Biology, which represents more than 120,000 scientists and is recognized as the principal voice of the biomedical research community on issues related to research funding and policy. He currently serves on the Board of Directors of the APLU, which includes 235 universities, and chairs its Council on Research.

Marchase recently completed service to the NIH as a member of a select “red team” advising on the practices and management of the NIH Clinical Center. He was honored by the Juvenile Diabetes Research Foundation in 1999 with the Mary Jane Kugle Award and by the American Association of Anatomists with the A.J. Ladman Award for Exemplary Service in 2010. Marchase was named a charter fellow of the National Academy of Inventors in 2012 and is a member of the Editorial Board of its journal, Technology and Innovation.

Prior to his time at UAB, Marchase received his bachelor’s degree in engineering physics from Cornell University and his doctorate in biophysics from The Johns Hopkins University. He completed his postdoctoral training and then was named assistant professor at Duke University, where he was honored as a Presidential Young Investigator by Ronald Reagan.