by Jeff Hansen
A quality-control checkpoint in pre-B cells restricts the range of antibodies produced by mature B cells, and manipulation of the checkpoint could make vaccines more potent. 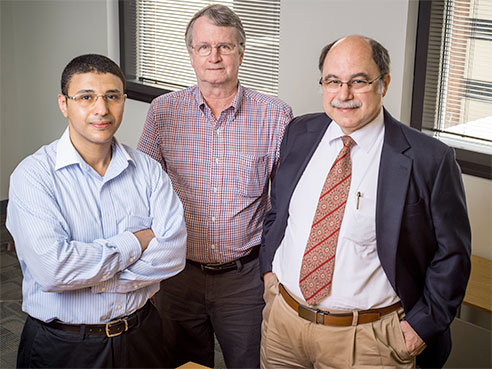 This checkpoint in early pre-B cells — the predecessors to the mature B cells — has a benefit and a drawback. The benefit of the newly described quality-control checkpoint is producing antibodies that tend to have a tyrosine amino acid at specific sequences in the part of the antibody that clamps onto a pathogen. This makes it a more effective antibody, due to the hydrogen bonding ability of tyrosine with the pathogen.

The pre-B cells that have other amino acids at that site are more likely to undergo programmed cell death, or apoptosis, as part of a quality-control process to eliminate ineffective pre-B cells before they can mature. This is a potential drawback because it restricts the repertoire of antibodies that B cells can produce, and people have difficulty producing effective neutralizing antibodies against some pathogens, such as HIV.

“We were trying to understand why it’s so difficult to make antibodies that can neutralize certain diseases,” said Schroeder, a professor of medicine and John Irby Research Scholar in the Division of Clinical Immunology and Rheumatology, UAB Department of Medicine. “A lot of people have thought that the antibody repertoire is entirely random, that the part of the antibody that can bind a pathogen can take any shape. We found that’s not true. Some antibodies are common and some are rare. This reflects the effect of evolution — the antibody repertoire is restricted, biased and limited.”

To discover the mechanism behind this selection, the UAB researchers used mouse models that produce uncommon sequences of amino acids in the variable region of a nascent antibody heavy chain in pre-B cells. Genetic rearrangements in pre-B cells lead to different variable region DNA sequences in each separate pre-B cell, to create a diverse population of mature B cells that can respond to a wide variety of antigens on infecting pathogens. But some of those sequences would lead to faulty antibodies if the pre-B cells were allowed to mature.

Hence, there are stringent checkpoints in the developing pre-B cells to test the potential antibodies and eliminate cells that do not pass the quality-control tests.

That protein scaffold, which contains the gene products VpreB and λ5, also contains a sensing site known to interact with the antigen-binding region of the nascent heavy chain, which is called the complementary-determining region-H3 (CDR-H3). The UAB researchers have found that this sensing site acts as a novel stringent checkpoint to affect antibody repertoire selection and function.

First, they analyzed the amino acid content, based on the expressed RNA sequence, from either living pre-B cells that are destined to become mature B cells or from apoptotic pre-B cells that are headed for programmed cell death. The researchers showed that progressively reducing the tyrosine content in the CDR-H3 region increasingly impaired the ability of the pre-B cell to pass through the checkpoint. They found that the VpreB portion of the SLC particularly selects for tyrosine at several adjacent amino acid sites at the center of the CDR-H3 antigen-binding site.

Second, they examined the molecular models of 133 mouse antibody-antigen crystal structures from protein data banks. They found that the antibodies showed a similar preference for tyrosine amino acids at those amino acid positions, and that those tyrosines were likely to engage the antigens through a hydrogen bond.

“Therefore,” the researchers wrote, “in addition to its stabilization role in the pre-B cell receptor, VpreB also acts as an early invariant antigen by selecting for particular CDR-H3 amino acids. These interactions shape the specificity of the immunoglobulin G humoral response and may thus impose limitations on development of certain neutralizing antibodies.”