A study has found that people who remained sedentary after mentally demanding tasks consumed more calories than those who exercised. 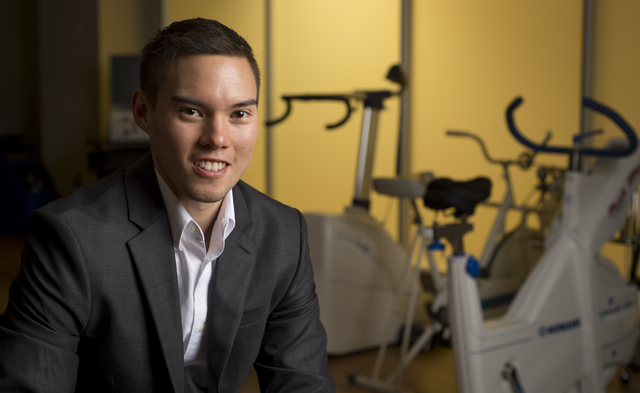 William Neumeier, Ph.D.A study by researchers at the University of Alabama at Birmingham suggests exercise may be the key to curbing your appetite after a long day at the office.

In a paper published this month in the journal Medicine & Science in Sports & Exercise, researchers found that people who exercised after doing mental work ate fewer calories compared to those who did mental work and remained sedentary.

“The modern work environment is highly sedentary and cognitively demanding,” said William Neumeier, Ph.D., lead author of the study. “Previous studies have shown that mentally demanding tasks, such as a big test, grant deadlines or other mentally strenuous tasks we perform every day, affect the brain’s energy demands, and increases in food intake were observed following such tasks. In this study, we explore whether glucose and lactate produced through exercise could serve as a way to provide additional energy for brain function, instead of food consumption.”

Researchers asked 38 undergraduate students to complete a graduate-level entrance exam. The students were divided into two groups. Following the exam, one group was given 15 minutes to rest, while the other group performed 15 minutes of high-intensity interval training on a treadmill. Participants also spent 35 minutes simply relaxing as a control condition the week before. While relaxing, students were told not to engage in any mentally or physically stimulating activities, such as reading, stretching or holding a conversation. Afterward, each group was offered an all-you-can-eat lunch of pizza.

Those who took the exam and then rested for 15 minutes ate an average of 100 calories more than when they simply relaxed without performing mental work, which reinforces previous studies that suggest working our brains does expend energy and causes feelings of hunger. Participants who exercised after the exam ate 25 calories less than when they simply relaxed for 35 minutes and then ate.

While blood glucose remained stable in participants following exercise, their lactate levels increased significantly. “Lactate may have replenished the brain's energy needs; however, the authors note that further investigation into how glucose and lactate may impact mental work and eating behavior is needed.” The authors also note that further research is needed to fully understand the observed effect exercise had on participants’ energy intake following mental work.

“One possible explanation is exercise’s effect on hunger and satiety hormones may decrease energy intake after activities that stimulate one’s appetite,” Neumeier said. “Our findings corroborate findings by other research groups and build on them by being the first to report a statistically significant difference in energy intake between participants’ completing mental work and a meal, or mental work and exercise then a meal.”

Neumeier is a graduate of the UAB College of Arts and Sciences Department of Psychology and is currently conducting postdoctoral studies through the UAB School of Health Professions UAB|Lakeshore Research Collaborative and the UAB Nutrition Obesity Research Center. His research interests in the link between psychology, exercise and obesity have been supported by UAB faculty across several academic areas. This research was supported by a National Heart, Lung, and Blood Institute T32 grant and a pilot research grant from the UAB School of Education Department of Human Studies.