A UAB study sheds light on and suggests a target for treatment of a variant of Guillain-Barré syndrome. 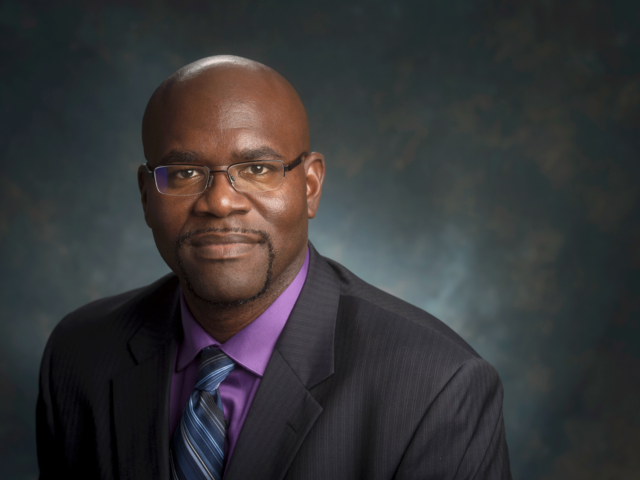 Eroboghene Ubogu, M.D., professor in the Department of NeurologyInvestigators at the University of Alabama at Birmingham have identified an intriguing potential treatment target for the most common form of Guillain-Barré syndrome. In a study published online in July in Acta Neuropathologica, the authors offer evidence of a crucial pathogenic role for a molecule that is associated with acute inflammatory demyelinating polyradiculoneuropathy — or AIDP, the most common variant of Guillain-Barré syndrome.

Guillain-Barré syndrome is the most common cause of sudden peripheral nerve disease in the world. It is an autoimmune disease affecting about one to three per 100,000 people a year. This year marks the 100th anniversary of the first recognized description of Guillain-Barré syndrome, a disorder that can lead to long-term disability, paralysis and death. There have been no new therapies for more than 20 years.

White blood cells, also known as leukocytes, are the immune system’s front-line soldiers. When the body recognizes the presence of a foreign substance, leukocytes are activated and migrate to the appropriate area to do battle with the invaders. Leukocytes travel from blood vessels into tissues by means of a process called leukocyte trafficking. This is a coordinated process by which leukocytes are attracted to blood vessels, then attach and migrate across them into the tissues to do their work.

“We have had a very poor understanding of the leukocyte trafficking process in Guillain-Barré syndrome,” said Eroboghene E. Ubogu, M.D., professor and director of the neuromuscular division in the Department of Neurology, UAB School of Medicine and lead author of the study. “We knew that leukocytes crossed into nerves through the blood-nerve barrier with deleterious effects, but we did not understand the mechanism. We undertook this study to examine whether a molecule called alpha M integrin, or CD11b, was involved. This molecule was known to make certain leukocytes attach to blood vessels, and our previous published work using AIDP patient leukocytes in the laboratory provided a clue that it may be crucially important.”

In the AIDP variant of Guillain-Barré syndrome, the focus of the autoimmune attack is the myelin sheath, a layer of insulation that surrounds nerve axons, similar to the insulation around the wires of an electric cable. The myelin sheath’s role is to rapidly move electrical impulses along nerves, and if it is damaged — or demyelinated — then nerve function is compromised.

Leukocyte cells travel over the endothelial cells of the blood/nerve barrier. Those that stop and attach have the capacity to enter the nerve and cause demyelination.

The first step taken by Ubogu and his team was to examine nerve samples from an archive of patients with AIDP located in the Shin J. Oh Muscle and Nerve Histopathology Laboratory at UAB. Oh, a professor emeritus in the UAB Department of Neurology, is a pioneer in the study of neuromuscular diseases.

“From these archived nerve samples, we studied three adult patients with AIDP compared to three matched controls,” Ubogu said. “We hypothesized that we would find CD11b on the leukocytes in those AIDP patient nerve samples, and we did. It was especially present in areas with significant demyelination.”

Next, Ubogu and his team looked at an animal model of AIDP where they were able to block CD11b early in the disease process. With CD11b inhibited, the affected mice exhibited less overall weakness and reduced inflammation, as well as less demyelination and axon loss.

“These two results strongly indicated that CD11b is essential for these autoimmune leukocytes to migrate into the nerves and cause demyelination in AIDP,” he said. “What we still didn’t know was how the cells physically managed to cross the blood-nerve barrier. Was the barrier leaky with gaps between cells? Did the leukocytes push through or between the blood-nerve barrier endothelial cells?”

Using a technique called phase contrast video microscopy, Ubogu’s team produced videos that show AIDP patient leukocytes as they migrated across the layer of endothelial cells that form the blood-nerve barrier in the laboratory. Normally, the leukocytes keep on moving, but Ubogu’s video evidence indicates that some leukocytes are able to stop and squeeze in between endothelial cells. CD11b played a crucial role in this process.

The team verified the laboratory results in actual patients by looking at the inflammation in the nerves of AIDP patients at very high magnification. This showed leukocytes crossing between the blood-nerve barrier endothelial cells without gaps in the barrier or change in how the barrier is structured.

“In a healthy immune system, one of CD11b’s normal jobs is to make specific leukocytes adhere to the surface of blood vessel cells,” Ubogu said. “Unfortunately, they do the same in the AIDP form of Guillain-Barré syndrome. This allows the autoimmune leukocytes to adhere to the blood vessel walls within the inner parts of the nerve, ultimately migrating with direct access to the axons where demyelination can occur.”

Ubogu says the results of these proof-of-concept studies strongly point to CD11b as a treatment target for peripheral nerve inflammation.

“If we can find ways to block or inhibit CD11b early on, we should be able reduce or limit the amount of abnormal leukocyte trafficking, inflammation, and the resulting demyelination and loss of axons in AIDP,” he said. “This should result in better patient outcomes. Another approach might be to selectively remove CD11b leukocytes from the blood circulation so that they are not available to adhere to the blood-nerve barrier endothelial cells in patient’s nerves. Either way, our findings suggest that CD11b is a key candidate for specific drug development strategies in Guillain-Barré syndrome.”

Ubogu says the findings are very exciting, as they provide knowledge of leukocyte trafficking in human nerves, but more work needs to be done in affected patients to develop an effective drug. The findings may also be applicable to other peripheral nerve inflammatory diseases. The research was funded by the National Institutes of Health and UAB.

Collaborators on the study are Chaoling Dong, Steven P. Palladino and Eric Scott Helton, Ph.D., of the Neuromuscular Immunopathology Research Laboratory, Division of Neuromuscular Disease, Department of Neurology at UAB.