UAB is the first hospital in Alabama and one of the first in the nation to use sophisticated Resuscitation Quality Improvement system simulators to improve CPR skills in emergency department staff.

Michael Kurz, M.D., standing, observes as Michael Lovelace, R.N., practices on the RQI simulator.The University of Alabama at Birmingham Hospital Emergency Department has acquired two high-tech simulators from the American Heart Association to enhance training for nurses and other emergency department staff on the fine points of proper cardiopulmonary resuscitation.

UAB is the fifth hospital in the United States and the first in Alabama to acquire the technology.

“Emergency department staff at hospitals across the country are required to undergo CPR recertification every two years, but studies have shown that their skills begin to degrade the moment the training session ends, and most people have lost effective skills within 90 days,” said Michael Kurz, M.D., associate professor in the Department of Emergency Medicine. “The new simulators allow us to approach CPR training in a whole new way, and we are seeing remarkable improvement.”

The machines, called RQI or the Resuscitation Quality Improvement system, consist of two sophisticated mannequins — one adult and one pediatric — attached to an even more sophisticated computer system. The machines measure all the variables involved with performing CPR and provide instantaneous feedback as a staff member is practicing.

The RQI machines are housed in the emergency department, which means staff does not have to take time off from work to attend a CPR class. The new training regimen calls for nurses and patient care technicians to undergo 10-minute updates every three months, using different modules that work on different skill sets. The computer records trainees’ performance and tracks their improvement over time. It even records whether trainees have placed their hands in the proper position on the mannequin. 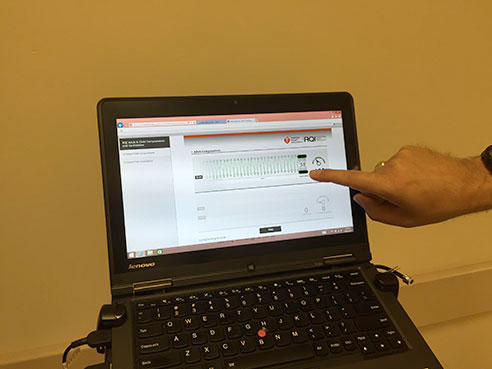 The computer provides real-time feedback, which helps hone CPR skills.“The machine measures variables such as depth of the CPR compression, the rate and the recoil, and the trainee can see on the screen whether they are reaching the appropriate benchmarks in these areas,” said Michael Lovelace, R.N., an emergency department nurse and lead CPR trainer.

Kurz, who is the vice chair for the Systems of Care subcommittee for emergency cardiovascular care committee with the Heart Association, says training every three months rather than at two-year intervals has made a significant difference.

UAB is only the fifth hospital in the nation to have the RQI machines and the first in Alabama. Kurz, who is the vice-chair for the Systems of Care sub-committee for emergency cardiovascular care committee with the Heart Association, says training every three months rather than at two-year intervals has made a significant difference.

Kurz says there are five main variables the machine tracks, and he is pushing for the emergency staff to reach a collective average score of 90 on each variable.

“For example, before we began using the RQI machines, our chest compression fraction score was about 72,” he said. “It’s now up to 86, and we should hit 90 in the near future. The RQI machines are having a major impact on enhancing our clinical care.” 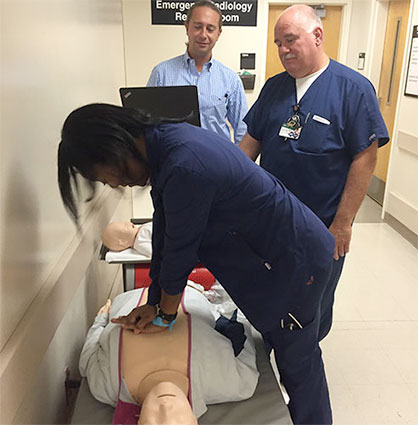 Tamicka Jones says her RQI training prepared her to perform CPR on a stricken man at the Atlanta airport. Better CPR skills means a better chance of survival for patients with cardiac arrest, and not just in the emergency room. Last spring, UAB Hospital emergency nurse Tamicka Jones was at the Atlanta airport when she saw a group of people attempting to assist in man in obvious distress

“The man’s face was gray, and he had no pulse,” Jones recalled. “I was the only medical professional present, so I began CPR and called for a defibrillator. Training on the RQI machine meant that my skills were sharp, and I had confidence that I was performing CPR at a high level of effectiveness.”

Jones performed CPR and delivered a shock from the defibrillator until the arrival of an EMS crew. She has since heard from the man’s family that he survived.

“Using these machines really changes the paradigm of how we teach and practice CPR,” Kurz said. “This is the largest change in our approach in over 60 years and really brings CPR training into the modern era.”