by Bob Shepard
A seven-year effort led by a UAB neurologist has established the first guidelines for the use of fMRI in epilepsy surgery. 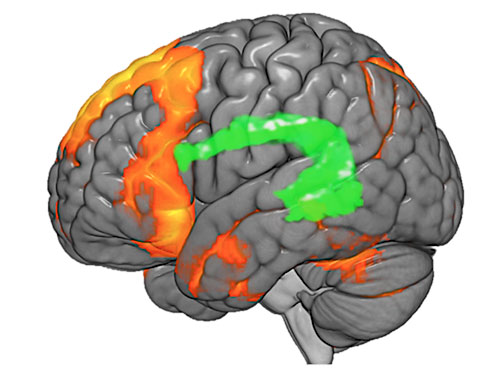 This fMRI image of the brain shows different areas responsible for language in red, and highlights the arcuate fasciculus in green. The arcuate fasciculus is a white matter tract that serves as a bridge, connecting different areas of grey matter in the brain.The first set of guidelines for the use of functional magnetic resonance imaging, or fMRI, in pre-surgical evaluation of patients with epilepsy have been published in the Jan. 12, 2017 issue of Neurology, the medical journal of the American Academy of Neurology.

The seven-year effort was conducted by a committee commissioned by AAN and led by Jerzy Szaflarski, M.D., Ph.D., professor in the Department of Neurology at the University of Alabama at Birmingham and director of the UAB Epilepsy Center.

The committee included experts in epilepsy and/or neuroimaging from ten universities and the National Institutes of Health. They performed a literature review of potentially relevant research studies going back to 1991, first reviewing more than 2,600 research abstracts to ultimately select 172 studies for full examination. Of those, 37 were deemed to be relevant and were used in the final analysis.

One of the main goals of the guidelines was to determine if fMRI would be useful in determining the location of language and memory functions in the brain of candidates for epilepsy surgery. Language is thought to be processed in several different areas of the brain, typically in the dominant hemisphere — the left hemisphere in most people. But the non-dominant hemisphere also participates in language functions.

It is necessary for physicians to understand where language is processed in each individual patient, called language lateralization and localization, in order to avoid damage to those areas of the brain during epilepsy surgery, potentially leading to loss of language skills. Physicians must also determine where memory function occurs to avoid deficits. The dominant temporal lobe is predominantly responsible for verbal memory while the non-dominant temporal lobe is responsible for non-verbal memory. Establishing the locus for language and memory in each individual patient is essential to ensure the most successful surgical outcomes.

The research team compared use of fMRI against a procedure known as the intracarotid amobarbital procedure, or IAP. This procedure, often referred to as the Wada test, is used to establish language and memory function within the hemispheres.

“The Wada test has been in use for more than 50 years,” Szaflarski said. “It’s an invasive, expensive procedure. We’ve long searched for a better test. The goal was to see if the advanced imaging capability of fMRI would provide the same or better information as the Wada test at a lower cost with less impact on the patient.”

The guideline committee concluded that fMRI is an option for lateralizing language functions in place of IAP for patients with temporal lobe epilepsy, temporal epilepsy in general or extratemporal epilepsy. The guidelines suggest it could be used as an alternative to the Wada test in these circumstances, or could be used in conjunction with the Wada test, if necessary. The evidence for fMRI use with temporal neocortical epilepsy or temporal tumors is insufficient, according to the committee’s findings.

A second goal of the study was to determine if fMRI would be useful in predicting language and memory outcomes of epilepsy surgery.

“Epilepsy surgery is not without risk,” Szaflarski said. “We’ve long sought better ways to predict the possible outcomes of surgery, particularly the risk of loss of language or memory. Patients need to be able to weigh the benefits of reduction or elimination of seizures against the risks of language or memory loss.”

Szaflarski says there was some evidence that fMRI might be better than the Wada test for predicting memory loss, but the sample size was too small to make a definitive determination.

“There seems to be utility in using fMRI for risk prediction in some types of epilepsy, but more study will be required,” Szaflarski said. “Clinicians should carefully advise patients of the risks and benefits of fMRI versus IAP during discussions concerning choice of specific modality in each case.”

Additionally, the guidelines serve to identify gaps in clinical knowledge that are still missing that will assist physicians in making the best decisions on epilepsy care for their patients.

“We still need to develop the most appropriate tasks for use during fMRI testing to produce the most consistent results,” Szaflarski said. “The epilepsy field needs to decide which tasks and paradigms are best suited to provide information on risks and lateralization, so that we can create a pathway for uniform testing and prediction across the epilepsy centers in the United States and around the world. These guidelines are a major step in that process.”

Szaflarski says the guidelines are typically updated every three years.