by Bob Shepard
In another example of precision medicine, UAB researchers have used IPF patients own lung tissue to create models to determine the most effective medication for that patient. 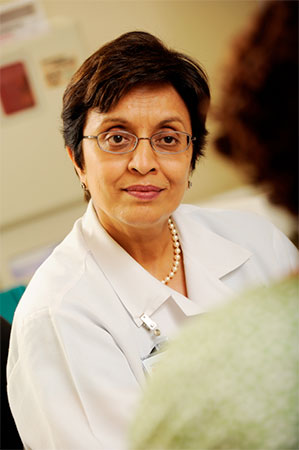 Veena Antony, M.D., professor of Pulmonary, Allergy and Critical Care Medicine. Pulmospheres, three dimensional multicellular spheroids composed of lung cells from individual patients, were shown to be effective in predicting the efficacy of medications for idiopathic pulmonary fibrosis, according to findings from University of Alabama at Birmingham scientists presented today in JCI Insight, a journal of the American Society for Clinical Investigation.

Pulmospheres are tiny spheres — about one millimeter in diameter — which contain all the various cell types found in a human lung and are grown from tissue obtained from a surgical lung biopsy. Pulmospheres give researchers a 3D model to study various aspects of cell biology and disease mechanisms.

“Our results suggest that pulmospheres simulate the microenvironment in the lung and serve as a personalized and predictive model for assessing responsiveness to antifibrotic drugs in patients with IPF,” said Veena Antony, M.D., professor in the Division of Pulmonary, Allergy and Critical Care Medicine within the Department of Medicine, and primary investigator of the study.

The UAB research team grew pulmospheres from 20 patients with idiopathic pulmonary fibrosis — a devastating lung disease — and nine control patients. They then examined whether the pulmospheres reacted to one of two commonly used medications for IPF.

“There is no cure for IPF, but there are two FDA-approved drugs that can help slow the rate of decline caused by the disease and improve quality of life,” said Antony. “Not all patients respond to both drugs, and some don’t respond to either. Having a reliable clinical test that can predict which drug works best for which patient is urgently needed.”

The pulmospheres were grown to useable size in about 24 hours following the biopsy, then exposed to the two medications, pirfenidone and nintedanib. Within about 16 hours, researchers were able to observe if the spheres responded favorably to one, both or neither of the medications.

“This is a wonderful example of precision medicine,” said Victor Thannickal, M.D., professor and director of the Division of Pulmonary, Allergy and Critical Care Medicine and a study co-author. “Using pulmospheres derived from a patient’s own cells may allow clinicians to tailor specific drugs to an individual patient without exposing that patient to potential side-effects or harm from treatments that are unlikely to be effective.”

Researchers confirmed the findings by following the patients over time, establishing that the response predicted by the pulmospheres was clinically observed in the patients. 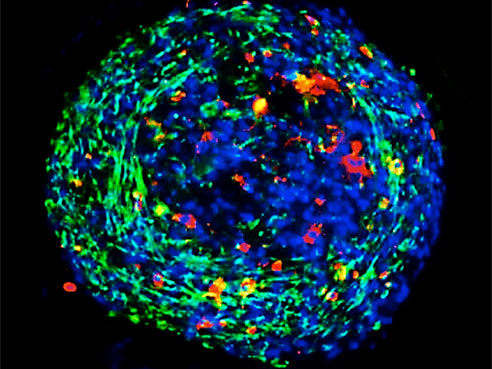 Pulmospheres are tiny one millimeter spheres which contain all the various cell types found in a human lung. Antony says there is a critical need for a better predictive model for IPF. Animal models of the disease are disappointing, and more traditional two dimensional cellular models are insufficient.

“The lungs are three dimensional organs and to truly understand the dynamics of IPF medications on the disease we require a 3D model, one that contains all the cell types found in a lung and that is able to function as a microcosm of the lung,” Antony said. “Many drugs have shown promise in pre-clinical studies, only to fail in subsequent clinical trials. Three dimensional modeling might change that.”

Antony says pulmospheres were developed in cancer research as a means of targeting potential drugs. A hallmark of IPF is an aggressive invasion by cells known as myofibroblasts, which mirrors the invasive phenotype of malignant cells, giving researchers reason to think that pulmospheres might work in IPF. The UAB trial was the first to study pulmospheres in IPF.

Antony also hopes that modern drug discovery techniques, using high throughput screening technology to quickly screen numerous compounds for disease-modifying properties, will be enhanced by the use of pulmospheres.

“There are many potential therapeutic agents for IPF in the discovery pipeline now, and this technique might prove to be a very effective way to determining which are the most promising,” she said.

Thannickal serves as the program director of a translational program project grant, sponsored by the National Heart, Lung and Blood Institute, that is focused on identifying novel diagnostic and therapeutic approaches to fibrotic lung disease.

“Without support of the NHLBI, and in particular the tPPG funding mechanism, the tissue biorepository which was critical to developing these innovative screening methods would not have been possible,” he said.

Funding for the study came from the National Institutes of Health. NIH describes IPF as a disease in which tissue deep in the lungs becomes thick and stiff, or scarred, over time. As the lung tissue thickens, the lungs are unable to properly move oxygen into the bloodstream.

IPF is a serious disease that usually affects middle-aged and older adults. IPF has no cure and many people live only about three to five years after diagnosis.