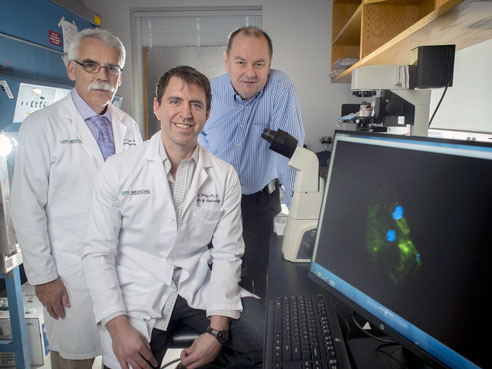 This provides new genetic clues to understanding IgA nephropathy, an autoimmune kidney disease that commonly causes kidney failure. The findings are relevant to IgA nephropathy and other diseases with similar underlying molecular defects, such as inflammatory bowel disease, certain types of blood disease and cancer.

“Very little is known about the causes of IgA nephropathy, genetic or otherwise, so our discovery represents an important step toward developing better therapies for this disease,” said lead author Krzysztof Kiryluk, M.D., the Herbert Irving Assistant Professor of Medicine at Columba University Medical Center.

The study, conducted by researchers at Columbia University and the University of Alabama at Birmingham School of Medicine, was published last month in PLOS Genetics.

The genes that were identified are involved in attaching a certain sugar to proteins, in a process called O-glycosylation. Failure to add a specific carbohydrate, called galactose, to the side chains of sugars (O-glycans) on serum IgA1 creates an abnormal IgA1 recognized as autoantigen by autoantibodies.

Subsequently, this process results in formation of pathogenic immune complexes that can incite injury in the filtering structures of kidneys. About half of patients with IgA nephropathy have progressive disease and eventually can develop kidney failure. There is no cure for IgA nephropathy; some medications, along with blood pressure control, can slow disease progression.

This first-ever genomewide association study of 2,633 patients and controls worldwide for defective O-glycosylation of serum IgA1 was made possible by a high-throughput blood test performed in the laboratories of Zina Moldoveanu, Ph.D., professor of microbiology, and Jan Novak, Ph.D., senior author on the paper and professor of microbiology, both at UAB — Alabama’s leading provider of genomic and personalized medicine.

The assay uses a carbohydrate-binding lectin found in the brown garden snail; this lectin specifically binds carbohydrate groups on serum IgA1 with galactose-deficient O-glycans. This lectin-based assay was originally introduced by Milan Tomana, Ph.D., Jiri Mestecky, M.D., Ph.D., and colleagues at UAB in the early 1990s, and was developed into a quantitative assay by Moldoveanu and colleagues in 2007. This test, used to analyze blood levels of galactose-deficient IgA1, one of the biomarkers of IgA nephropathy, in such a large number of subjects enabled this genomewide association study.

Two DNA regions, one on chromosome 7p21.3 and the other on chromosome Xq24, showed significant association. The sites correlated with genes for C1GALT1 and C1GALT1C1. Together, these two sites explain about 7 percent of galactose-deficient variability on IgA1 in Europeans and 2 percent in East Asians.

The two genes make proteins critical for the proper O-glycosylation of IgA1 molecules. C1GALT1 gene encodes an enzyme-catalyzing addition of galactose to O-glycans, and C1GALT1C1 encodes a protein that acts as a chaperone for the enzyme during its synthesis. The role of both genes was confirmed by Colin Reily, Ph.D., instructor in nephrology, Department of Medicine, UAB, by knock-down experiments of C1GALT1 and C1GALT1C1 in cells producing IgA1.

These cells were isolated from blood of IgA nephropathy patients and healthy controls recruited by Bruce A. Julian, M.D., professor emeritus in nephrology, Department of Medicine, UAB. The test uses siRNA knock-down of the two genes in cells producing IgA1 and then follows with a lectin-based assay to determine changes in galactose content of IgA1 O-glycans. Knock-down of each of the two genes increased production of the galactose-deficient IgA1 secreted by the cells from both groups.

Kiryluk says that about 43 percent of the genetic variability underlying IgA1 nephropathy is still unexplained. A genomewide association study of some 10,000 patients is now underway.

Abnormal O-glycosylation is seen, not only in galactose-deficient IgA1 in IgA nephropathy, but also in glycans of other proteins in diseases such as inflammatory bowel disease, some blood diseases and cancer. However, the large number of different enzymes involved in protein glycosylation, their cell- or tissue-specific activity, and the complex variety of carbohydrate structures attached to proteins have been barriers to understanding the critical steps and regulation in protein glycosylation.