In 2014, Maggie Hanberry was just like any other high school sophomore in her hometown of Hattiesburg, Mississippi. At 15 years old, she enjoyed the usual teenage activities — spending time with her friends and family, going to church, doing her schoolwork. She had even decided to take up running and had, along with her mother, started training for her first 5K.

It was during that training that Maggie’s life completely changed for reasons she would never expect.

“Maggie and I started training together, and I noticed she was not progressing in the training plan,” said Maggie’s mother, Melissa Hanberry. “She would walk more than run. We entered a race, and we both finished; but several weeks later, she told me about some symptoms she had been having.”

Maggie had been experiencing stomach pain and fatigue, and she had lost a good bit of weight. Her parents initially thought the problem could be treated with over-the-counter drugs and a change in diet, but the symptoms persisted. Upon seeing their family physician, Maggie confessed that, in addition to her other symptoms, she had also been passing blood. Her doctor referred her to a pediatric gastroenterologist in nearby Jackson for further tests.

“We were thinking it could be Crohn’s or ulcerative colitis — things that are fairly common for a teenage girl,” Melissa said. The doctor initially agreed, but ordered a colonoscopy to be sure, which delivered some unexpected news. 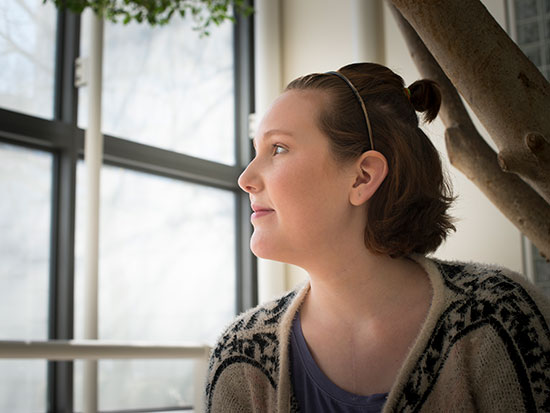 “Colon cancer for a 15-year-old is a one-in-a-million diagnosis," said Maggie Hanberry, who was diagnosed with stage 4-b disease in 2014. Last November, the Mississippi teen began receiving treatment in a phase I trial at UAB.“The doctor said she couldn’t even get in to do the colonoscopy from the bottom, because there was a mass there,” Melissa said. “That’s when I knew our lives were changing, when I heard the word ‘mass.’”

That news was a shock to Maggie as well. “I was really confused, because that came out of the blue,” Maggie said. “Colon cancer for a 15-year-old is a one-in-a-million diagnosis. It wasn’t even something that was on my radar.”

On April 7, 2014, Maggie was diagnosed with stage 4-b colon cancer, meaning that the cancer had already spread to a second organ; in Maggie’s case, her lungs. She immediately underwent surgery and began chemotherapy treatments at a children’s hospital in Jackson the following month. A few weeks into those treatments, she began radiation therapy.

Following a few months of treatment, Maggie had another surgery in August 2014, after which she continued on with her chemotherapy. Scans, however, revealed that the treatments were not working. She started a new chemotherapy that would require a three-day stay in the hospital every two weeks. She began that regimen in February 2014, nearly a year after her diagnosis.

“Surprisingly, I started to gain more normalcy in my life because it was a consistent schedule with fewer side effects,” she said.

Maggie initially had a positive response to the new treatment and was able to stop chemotherapy altogether nearly a year later, in January 2016. That May, she returned for a follow-up scan only to find that her cancer was growing again. She began chemotherapy, and over the course of the summer, doctors discovered more bad news — the cancer had spread to her liver.

“We thought we were just dealing with micro-disease in her lungs, which we thought we could treat and keep stable,” Melissa said. “We knew her disease was systemic, but we knew then we didn’t have the control over it that we thought.”

Seeing that the chemotherapy was not working, Maggie’s oncologist in Jackson suggested that participating in a clinical trial might be the best option for her. The Hanberrys took their daughter to MD Anderson Cancer Center in Houston, where doctors agreed with the recommendation and encouraged them to find a phase I clinical trial. “The oncologist recommended finding something close to home. UAB was the first place that came to mind,” Melissa said.

She began searching online for clinical trial options, which led her to the University of Alabama at Birmingham’s Phase I Clinical Trials Unit, which is dedicated to conducting all phase I clinical studies at UAB. Phase I trials are unique because they involve drugs never before tested in humans and, at UAB, are led by a team specifically dedicated to phase I studies. While many institutions offer phase I studies, UAB is one of the few academic medical centers conducting phase I studies through a cohesive team approach. This allows patients access to novel drugs and therapies otherwise not available, while benefiting scientific research and receiving care through a “one-stop shop” approach.

“Patients who enroll in a phase I trial have often failed or exhausted all other therapies,” said Mansoor Saleh, M.D., director of the Phase I Program and UAB Comprehensive Cancer Center senior scientist. “Our patients volunteer to take part in these novel treatment options. It is often a trip into the unknown, and our team is dedicated to giving these patients hope and taking care of them on this therapeutic journey.”

Enrolling in a phase I trial has been a learning experience for both Maggie and her family. “I kind of knew what clinical trials were, but I didn’t know what all went into them,” Maggie said. “This was completely different because I was moving from pediatric oncology, which is all I had known since my diagnosis, into adult oncology. It’s a totally different environment.”

Maggie began receiving treatment through a phase I trial at UAB in November 2016 and has had a positive response to the treatments. She currently receives an infusion every two weeks and scans every six weeks, which determine whether she continues the current treatment or begins a different regimen. While she does not know how long she will be on the trial, she is grateful for the care she is receiving at UAB. “All the nurses and doctors have been very kind and generous,” she said. “UAB has always kept us knowledgeable about what’s going on and what I’m getting and what they’re doing. It’s been a very good experience so far.”

“From the initial contact with UAB,” Melissa said, “we felt like we were at home. I can’t say enough about the people here and the level of care that Maggie is getting.”

Saleh hopes that stories such as Maggie’s will help change the conventional thinking surrounding phase I studies. “We need to think about phase I studies differently than we have thought about them before. It used to be an end-of-the-line option, and it’s no longer that. In many cases, it may very well be closer to the front of the line.”

Over the past three years, Maggie has tried to live as normal a life as she can, which she did not know would be possible when she was first diagnosed. “I was very concerned that this was going to stop everything, and it was just going to be all about cancer for an indefinite amount of time,” she said. “I didn’t know if I was going to be able to do school or have a normal life.”

Through home schooling, Maggie was able to continue her education at her own pace and graduate from high school in 2016. Now about to turn 19, she is looking forward to eventually attending college and, inspired by her cancer experience, pursuing a degree in nursing. Reflecting on her journey, she acknowledges the many ways that cancer has changed her.

“Cancer has allowed me to be more independent,” she said. “I’ve learned to speak up and be more outgoing because I have to talk to doctors and nurses consistently. It’s also allowed me to be more compassionate toward people in the same situation. I’ve become more passionate about raising awareness for pediatric cancer. That’s something very near and dear to my heart now.”

“Maggie has such a positive outlook,” Melissa said. “She has inspired me with her willingness to take each day as it comes, to take what each day brings and try to make the best of it. That has been the biggest thing — to see how she has blossomed despite, or in the midst of, battling cancer.”

For Maggie, that newfound strength is a source of inspiration for her as she continues on her cancer journey, as well as advice for others facing a similar path. “Trust that God is going to take care of you through everything. Look for the small things every day to pull you through. You have to set goals for yourself, and look for happiness in everything.”