Journal: Researchers can track hazardous chemicals from fast-food wrappers in the body

Research teams from the University of Alabama at Birmingham’s School of Medicine and the University of Notre Dame have developed a new method that enables researchers to radiolabel three forms of perfluorinated and polyfluorinated alkyl substances and track the fate of these chemicals when they enter the body.

This is a significant and timely advancement in identifying and tracking these PFASs, which are known to be harmful to the human body, and just last month were found to be used extensively in fast-food wrapping paper at many popular chain restaurants.

The novelty of the newly designed method is that one of the fluorine atoms on the PFAS molecule was replaced with a radioactive form of fluorine, the same radioisotope fluorine-18 that is used for medical positron emission tomography scans in hospitals around the world.

“For the first time, we have a PFAS tracer or chemical that we have tagged to see where it goes in mice,” said Suzanne Lapi, Ph.D., senior author of the study published today in the Journal of Environment Science and Technology. Lapi is an associate professor in UAB’s Department of Radiology and Chemistry, and director of UAB’s Cyclotron Facility. “Each of the tracers exhibited some degree of uptake in all of the organs and tissues of interest that were tested, including the brain. The highest uptake was observed in the liver and stomach, and similar amounts were observed in the femur and lungs.” 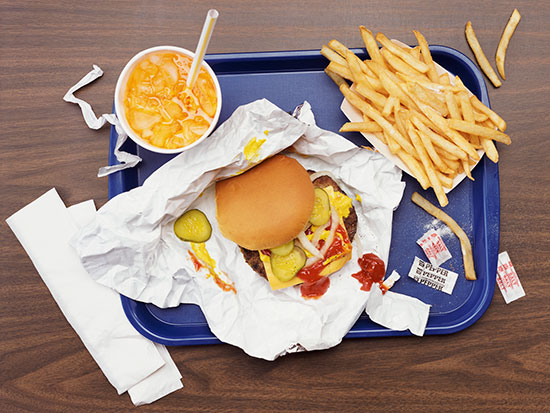 In February, a study of more than 400 packaging materials found that 46 percent of food contact papers were contaminated with PFASs.PFASs are often used in stain-resistant products, firefighting materials and nonstick cookware and not meant for ingestion. Previous studies have shown PFASs can migrate, contaminating the food and, when consumed, accumulating in the body.

Now that it appears likely that any PFASs that can be synthesized and isolated could be radiolabeled and used to directly measure uptake and biodistribution kinetics in biological systems, it opens the possibility of directly measuring uptake in human subject volunteers.

“This is possible since trace amounts of the compounds are easily measurable and the radioactivity short-lived,” said Graham Peaslee, Ph.D., the study co-author and professor of experimental nuclear physics in the College of Science at the University of Notre Dame. “It’s an important discovery because PFASs are a really persistent chemical that, once in the bloodstream, stays there and accumulates, which is not good.”

Diseases including kidney and testicular cancers, thyroid disease, low birth weight and immunotoxicity in children, and other health issues have been linked to PFASs in previous studies.

Now that researchers have for the first time identified which PFASs initially accumulate — and in which specific organs — and with some surprising differences, the authors say there are health implications far beyond this initial study.

“We are very excited about this technique, which borrows from our current work developing nuclear medicine imaging agents,” said Jennifer Burkemper, Ph.D., scientist in UAB’s Cyclotron Facility and the first author on the study. “This work can enable rapid screening of PFAS compounds to gain key insights into their biological fate.”

PFASs in the news

Fluorinated chemicals have been in the news a lot recently, especially PFASs. There have been industrial accidents like those uncovered near the Hoosic River in New York this past fall, and the Dupont settlement of $670 million last month related to the dumping of the toxic chemical C8, also known as perfluorooctanoic acid, into the Ohio River.

Another source of exposure to these chemicals was reported in February, when a survey found that one-third of fast-food wrappers had been treated with these fluorinated chemicals.

“There was concern that these chemicals might directly enter the food that was wrapped with treated packaging,” said Peaslee, who used particle-induced gamma-ray emission to make the findings reported in February. “A larger concern is that, because these chemicals persist for a long time in the environment, when the treated consumer products enter the landfill, these chemicals will re-emerge into our drinking water. These overall results already call into question the safety of these alternative shorter-chain PFAS compounds.”

Lapi says the new novel tool developed by the research teams can be used for studying PFAS behavior in environmental remediation studies to measure the fate of radiolabeled compounds in environmental treatment systems.

“This is a tremendous first step,” Lapi said, “and it underscores the need for further studies to aggressively investigate different PFAS compounds in different biological and environmental systems to assess the full impact of this novel radiosynthetic method.”

In addition to kidney and testicular cancer, scientists have previously found high cholesterol, thyroid disease, pregnancy-induced hypertension and ulcerative colitis to be correlated to the amount of perfluorooctanoic acid, or PFOA, found in the blood of people who were exposed to the tainted water.

As a result, the Environmental Protection Agency and U.S. manufacturers reached a compromise to voluntarily remove two specific “long-chain” PFAS from the U.S. market by 2015 — including PFOA. However, industry has switched from these “long-chain” forms of PFAS to shorter-chained versions of the same chemicals, Peaslee says. There are no toxicology data available for most of the alternative short-chain PFAS compounds used commercially.

Lapi’s team makes radioactive molecular imaging agents for nuclear medicine using the UAB Imaging Facility’s cyclotron, a type of particle accelerator that moves protons, one kind of charged particle, along a spiral path to strike a material to produce radioisotopes. These radioisotopes can be chemically attached to molecules created to home in on biological targets of interest. These targets typically include certain receptors on cancer, and lung and heart function. They also look at different tracers for neurology.

When researchers looked at the PFAS chemicals and saw their structure, Lapi says, her group thought the chemistry of the compound was amenable enough to do radiolabeling with their techniques.

“Conventionally, tracing these PFAS compounds is very difficult,” Lapi said. “These compounds are not UV active, and they’re very difficult to detect. There are some techniques where you can detect total fluorine concentration, but that does not give you an idea of which compound the fluorine is attached to. With our method, we can actually tag the intact compound with a fluorine 18 radio tracer, and it gives us a handle so we can see where that compound is going and make very sensitive measurements. These sensitive measurements are probably the most important thing, because it’s so difficult to detect in other methods, where you would have to take the liver out, homogenize it, extract the chemical out and do mass spectrometry to see how much of the chemical is in there. And you’d have to do it with every single organ. For us, we can take the whole mouse, image it, and we’re done. Or we can take the tissues and we can count it, and we’re done. It’s a much quicker and less time-consuming method to look at where these go.”

So far, Lapi says, the group has looked at three compounds, far short of the hundreds of PFASs that have been identified.

“While I don’t think we will look at all of these PFASs, we would like to look at different families of these compounds and see how they are distributed in the body,” Lapi said. “Because even with very small changes in these compounds, we were able to see differences in brain uptake, which is important because these may have neurological impacts. We saw different clearance patterns, blood binding and other things. We want to look at different classes of compounds, how they’re excreted from the body, how they accumulate, and see if we can really say something about how you would get rid of these compounds.”

The next step after that would be to identify how this newly discovered technique could be used to clean up compounds in environmental situations where there is a contaminate issue.

“We want to know if, say, we have a huge contaminated water supply full of PFASs, how do we make techniques to get PFAS out of the water supply,” she said. “Perhaps we can take a bucket of water, spike it with our radioactive substance, put it through filters and different types of cleanup technologies, and see how we can effectively extract that compound from the water supplies.”

Lapi and her team are excited that they have been able to show how to take techniques from nuclear medicine and previous UAB imaging studies and apply them to environmental compounds — a significant achievement moving forward.

“When people think of radio chemistry, they typically think of tritium or carbon 14 or these very long-lived compounds when doing these pharmacokinetic studies,” Lapi said. “Now we have a whole host of different radio isotopes with different chemical properties, and we really have these nice tools that we can use for different applications outside of nuclear medicine, like environmental cleanup applications.”