by Tyler Greer
A new clinical trial seeks to determine whether a machine that pumps warm, oxygenated blood in cadaver kidneys can improve quality of the organ prior to transplant. 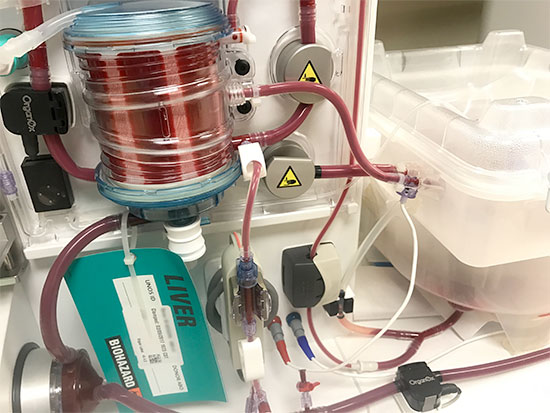 This normothermic perfusion machine pumps the liver with warm, oxygenated blood and nutrition at or just below body temperature for up to 24 hours before transplant.  Physicians in the University of Alabama at Birmingham Department of Surgery have transplanted Alabama’s first patient with a deceased donor liver that was recovered from the donor and “kept alive” and preserved at body temperature instead of the standard cold temperature — a technique that enable surgeons to view the functional level of the organ before it is transplanted in a patient.

The transplant was performed recently by UAB Medicine surgeons on a 63-year-old Valley, Alabama, resident named Lana as part of a Food and Drug Administration investigational clinical trial using a normothermic machine perfusion technique developed by OrganOx Ltd, a United Kingdom-based company. Surgeons place the donated liver in the normothermic machine, which then pumps the organ with warm, oxygenated blood and nutrition at body temperature for up to 24 hours before transplant. Devin Eckhoff, M.D., director of UAB’s Division of Transplantation, says early results from the European studies have shown that normothermic perfusion has improved early outcomes in both graft function and recipient outcomes.

“Because there is a grave shortage of livers available for transplantation, the transplant community is continuing to push the boundaries to increase the availability of organs,” Eckhoff said. “These normothermic machines enable us to preserve the liver under normal physiological conditions — as opposed to the usual hypothermic conditions in which the organ is typically transplanted. With the normothermic preservation, the thought is that the liver maintains graft function throughout the preservation process; it allows for pre-transplant assessment of organ function and thereby potential viability to predict suitability for implantation by the transplant surgeon.”

UAB’s School of Medicine and UAB Hospital have joined 14 other transplant centers in the United States in this investigational study. Research efforts like this clinical trial have focused on overcoming the limitations of cold storage, which is the current universal standard for organ preservation, with a move toward normothermic machine perfusion.

Lana, the UAB liver recipient, previously educated and aided families on the value of being an organ donor as a registered nurse at East Alabama Lanier Hospital for 25 years. She says she feels better than she has in three years. That was when the combination of a blood clot, fatty liver disease and medications she had taken her whole life for lupus converged to cause the beginning of liver failure.

“I’m doing fantastic, just wonderful, and I’m already back home doing everything I did before my transplant,” she said. “It’s ironic that I would be the one in need after all of the years of talking about organ donation with patients or patient families. Even before I was a donor coordinator, I believed in organ donation. I signed up when I was in my early 20s. I’m beyond grateful to have received this gift now.” 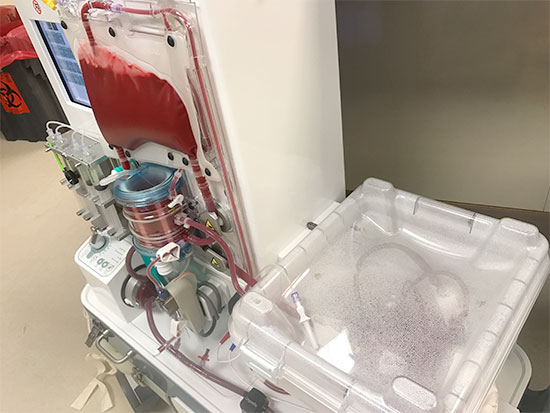 Preliminary evidence from clinical trials in Europe have shown organ preservation by normothermic machine perfusion is superior to static cold storage, a breakthrough that could be a major benefit to those with end-stage liver disease.  Normothermic preservation advantages

Although limited in terms of the duration of preservation, cold storage has the major advantages of simplicity, portability and affordability. However, with increased use of marginal organs in recent years because of the dearth of livers available, the limitations of static cold storage are a major factor influencing patient and graft survival rates.

“This machine has the potential to really help in a number of ways,” said Stephen Gray, M.D., liver transplant surgeon and director of UAB’s Abdominal Transplant Fellowship. “The fact that the machine can perfuse the organ with oxygenated red blood cells at normal body temperature — under similar conditions as it would be inside the body — and that we can observe it making bile before transplant is just an extraordinary feat, and a potential significant benefit to us as surgeons and our patients. With these normothermic machine-perfused livers, we have the ability to assess specific parameters while the liver is on the device prior to transplant with hopes to better understand how the liver will function in the recipient, whereas typically with cold storage we do not know if the liver will work until the transplant takes place.”

This kind of advancement also could have a positive impact on the timing of when surgeons operate, if a liver can ultimately be kept viable for up to 24 hours. Currently, surgeons have to operate as soon as possible whenever a donated liver becomes available, no matter the time of day.

“You can use a liver for transplant that was placed in cold storage for up to 12 hours; but cooling the organ to ice temperature to slow down its metabolism does not stop it from deteriorating, usually within the first six to eight hours,” Gray said. “And if the organ is damaged in some way, perhaps by being deprived of oxygen, the combined effect can be catastrophic for the organ. The perfused machine would allow us to potentially extend the storage time.” 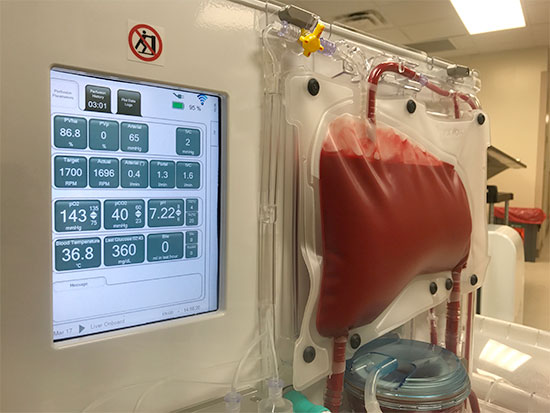 The machine works similar to a greenhouse, and is constructed from basic components that make up conventional cardiopulmonary bypass, including basic roller pumps, oxygenators and heat exchangers.  Eckhoff added that preliminary evidence from clinical trials in Europe have been promising.

“If this is as successful as it appears it can be, it will be a significant benefit to those in need of liver transplantation,” Eckhoff said. “About 60,000 patients die of liver disease annually in the United States, and many of them could theoretically have been treated with a liver transplant. This device has the potential to change that radically by enabling us to transplant many organs that are simply unusable with current techniques.”

The clinical trial at UAB is expected to last 18 months.

For Lana, she is just happy to have a second chance at a healthy life.

“It’s hard to describe how you feel about someone who makes the decision to give life to others after they are gone by choosing to be an organ donor,” Wiggins said. “I had a cousin who died when he was 19, and his parents donated all of his organs — his heart, kidneys, liver — everything they could. He was a healthy young boy who helped save several lives. To have someone do the same for me is overwhelming. A tremendous blessing.”

Register to be an organ donor at alabamaorgancenter.org or visit organdonor.gov to find your state’s registry today.