by Jeff Hansen
The first target for the UAB spinoff Incysus Ltd. will be glioblastoma. Incysus has just received a European patent for its innovative approach to fighting cancer. 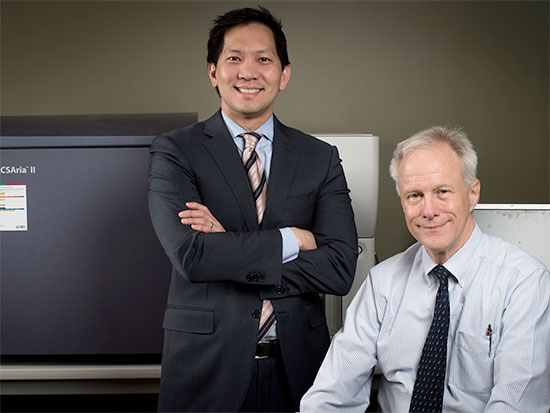 Will Ho, standing, and Lawrence LambThe University of Alabama at Birmingham and two partner institutions this month received a European patent for their novel approach to fighting cancer, an approach that is led by the UAB spinoff biopharmaceutical company Incysus Ltd.

Incysus is focused on delivering innovative cellular therapy to treat solid tumor cancers. The European patent is owned by the academic collaborators of Incysus — UAB, Emory University and Children’s Healthcare of Atlanta — and it is licensed exclusively to Incysus for all therapeutic purposes. U.S. Patent applications are pending.

The novel cellular therapy is called drug-resistant immunotherapy, or DRI. It is in its preclinical phase, and Incysus is moving toward an investigational new drug application filing with the U.S. Food and Drug Administration to begin tests of safety and efficacy in patients with the brain tumor glioblastoma.

DRI combines two ways to fight cancer — immunotherapy and chemotherapy. While chemotherapy can shrink tumors, immunotherapy uses the body’s own immune system to attack cancer, by stimulating the system or giving the patient additional immune system components. Unfortunately, chemotherapy often destroys the immune cells, and growing cancers can also block an immune response that otherwise would destroy the cancer. Tumors also create a tumor microenvironment around the tumor cells that acts as a defensive barrier.

William Ho, the president and CEO of Incysus, uses simple language to explain the problem solid tumors pose for immunotherapy after immune system cells are injected into the patient.

“The analogy I use is everybody is trying to create a strong army made up of Spartans, cells that can fight cancer cells hard,” Ho said. “But on their journey to the solid tumor, some get lost, some die, and when they get to the site, they find the tumor cells are sitting in a castle, protected by a moat.”

“By being able to combine chemotherapy and immunotherapy, we can use chemotherapy to ablate or modify the tumor microenvironment,” Ho said. “Chemo acts like a bomb. It flattens the castle walls.”

Incysus has supported the UAB laboratory of Lawrence Lamb, Ph.D., professor of medicine, senior scientist in UAB Comprehensive Cancer Center and a scientific co-founder of Incysus, with significant funding as he completes the DRI preclinical phase.

Lamb and H. Trent Spencer, Ph.D., associate professor of pediatrics at Emory University School of Medicine and Incysus scientific co-founder, began the research that eventually led to DRI when both were at the University of South Carolina. “For the past 15 years, we have worked on developing this therapy,” Lamb said.

“The chemo lights up the tumor,” Ho said.

As Incysus moves toward an application to initiate clinical testing, Lamb, a co-founder and chair of the Incysus scientific advisory board, is giving presentations at international meetings. Last month he spoke to the European Society for Blood and Marrow Transplantation in Marseilles, France, and next month he presents at the International Society for Cellular Therapy in London.

Lamb and Ho first met when Lamb was stranded in New York during Winter Storm Juno in January 2015. Ho, a Canada native with a 16-year background in life sciences biotechnology, put on his winter boots and snow jacket and walked through the blizzard to share a two-hour lunch with Lamb at the Lexington Brass restaurant in midtown Manhattan. By the end of the year, Incysus was formed.

Ho visits UAB from New York every few weeks to coordinate and plan with Lamb. Last month, the Birmingham Business Alliance also helped him participate in a number of meetings with investors from the metro Birmingham area to share the Incysus story.

“We’re trying to bring in the capital to help expand and build,” Ho said. “This approach is underappreciated. There are almost no companies talking about gamma delta T cells, and the approach with DRI is pretty novel and unique.”

“There’s a lot of great science and great physicians at UAB,” Ho said, “something that is not always appreciated in the major venture capital hubs, Boston and San Francisco.”