by Jeff Hansen
This novel method improves purification of complex proteins by 10- to 500-fold, and it may aid both research and large-scale industrial production. 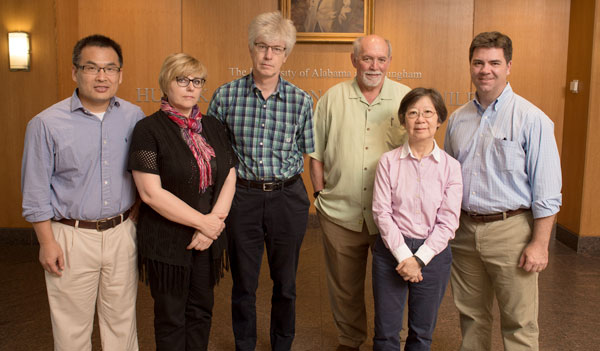 From left: Hengbin Wang, Marina Vassylyeva, Dmitry Vassylyev, Patrick Higgins, Louise Chow and Matthew RenfrowA novel method to improve the high-yield, high-purity, high-activity purification of complex proteins by 10- to 500-fold has been developed at the University of Alabama at Birmingham.

“This new method offers a number of crucial advantages to both researchers and the pharmaceutical industry,” said Dmitry Vassylyev, professor of biochemistry and molecular genetics at UAB. “It is potentially the most efficient and universal tool for high-throughput studies of many significant biological systems and may aid large-scale production of therapeutic proteins.”

In a paper published in Proceedings of the National Academy of Sciences, Vassylyev and UAB colleagues tested their CL7/Im7 affinity chromatography purification method on five traditionally challenging biological molecules, including prokaryotic and eukaryotic membrane proteins and multisubunit DNA/RNA-binding proteins.

“A notable illustration of the superior performance of the CL7/Im7 approach,” they wrote in the PNAS report, “is that the CNX protein sample, which we purified in a few hours and from only a few grams of E. coli cells, would have a market value of about $400,000, according to current commercial prices.”

The system is simple and reusable — the UAB researchers have restored and reused their affinity chromatography column more than 100 times, maintaining nearly 100 percent binding capacity.

The method is based on the remarkably strong binding affinity between bacterial toxins called colicins and their specific immunity proteins. A host bacteria can release a colicin toxin — such as Colicin E7 DNAse — that is able kill other bacteria. Inside the host bacteria, the CE7 is bound with Immunity Protein 7, or Im7; this binding prevents self-inflicted destruction.

The binding affinity of CE7/Im7 is nearly as strong as a covalent bond, and it is four to seven orders of magnitude higher than other affinity chromatography analogs. Vassylyev and colleagues made an inactive variant of CE7, called CL7, which has no DNase activity but retains full binding affinity for Im7. They also made a variant of Im7 that allows efficient coupling to agarose beads.

Using genetic techniques, the CL7 tag is easily inserted into genes of target proteins, in both eukaryotes and prokaryotes. These genes may be moved to an expression vector, or the tagged target protein can be expressed from native cells without amplification. 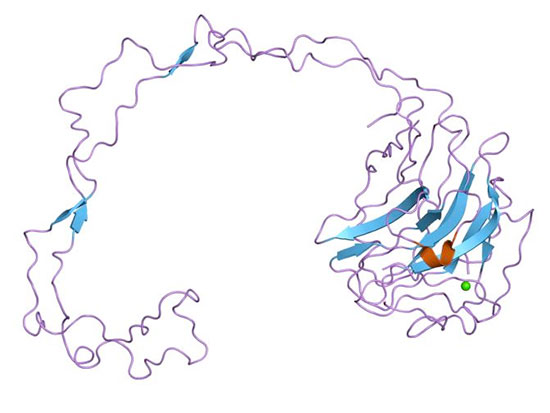 Molecular structure of calnexin chaperone protein. Source: Wikimedia CommonsWhen a crude protein lysate is poured through a column filled with the Im7-agarose beads, the CL7 tags on the target protein bind to the Im7. An engineered protease site is used to release the target protein from the bound CL7 tag. This allows one-step HHH purification, with 97 to 100 percent purity, for the target proteins tested by the UAB researchers.

In contrast, most published purification schemes for these challenging proteins are multistep, multiday protocols, with lower yields. Vassylyev, a protein crystallographer, says getting large amounts of pure protein is the rate-limiting step in crystallography, prompting him to begin a search for a better method four years ago.

The simple purification system is also applicable to pulldown experiments and kinetic activity or binding assays, such as surface plasmon resonance. It also may assist cryo-electron microscopy.

Chow, a professor of biochemistry and molecular genetics at UAB, is the Anderson Family Chair in Medical Education, Research and Patient Care in the School of Medicine.

Funding for this research came from UAB and National Institutes of Health grants GM98539 and GM081489.