by Jeff Hansen
These results, seen in animal models, represent a potentially novel therapeutic target for the treatment of seizure disorders. 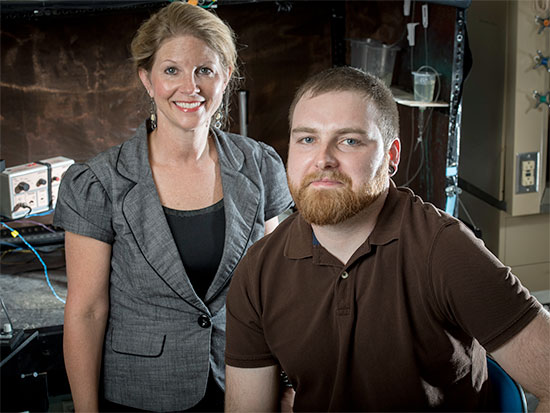 Lori McMahon, Ph.D., professor of cell, developmental and integrative biology, and Luke Stewart, a doctoral student in the Neuroscience Theme of the Graduate Biomedical Sciences ProgramSeizure disorders — including epilepsy — are associated with pathological hyperexcitability in brain neurons. Unfortunately, there are limited available treatments that can prevent this hyperexcitability. However, University of Alabama at Birmingham researchers have found that inducing a biochemical alteration in brain proteins via the dietary supplement glucosamine was able to rapidly dampen that pathological hyperexcitability in rat and mouse models.

These results represent a potentially novel therapeutic target for the treatment of seizure disorders, and they show the need to better understand the physiology underlying these neural and brain circuit changes.

Proteins are the workhorses of living cells, and their activities are tightly and rapidly regulated in responses to changing conditions. Adding or removing a phosphoryl group to proteins is a well-known regulator for many proteins, and it is estimated that human proteins may have as many as 230,000 sites for phosphorylation.

A lesser-known regulation comes from the addition or removal of N-acetylglucosamine to proteins, which is usually controlled by glucose, the primary fuel for neurons. Several years ago, neuroscientist Lori McMahon, Ph.D., professor of cell, developmental and integrative biology at UAB, found out from her colleague John Chatham, D.Phil., a UAB professor of pathology and a cardiac physiologist, that brain cells had the second-highest amounts of proteins with N-acetylglucosamine, or O-GlcNAcylation, in the body.

Since neural excitability in the hippocampus is a key feature of seizures and epilepsy, they hypothesized that acutely increasing protein O-GlcNAcylation might dampen the pathological hyperexcitability associated with these brain disorders.

That turned out to be the case, as reported in the Journal of Neuroscience study, “Acute increases in protein O-GlcNAcylation dampen epileptiform activity in hippocampus.” The study was led by corresponding author McMahon and first author Luke Stewart, a doctoral student in the Neuroscience Theme of the Graduate Biomedical Sciences Program. Stewart is co-mentored by McMahon and Chatham.

“Our findings support the conclusion that protein O-GlcNAcylation is a regulator of neuronal excitability, and it represents a promising target for further research on seizure disorder therapeutics,” they wrote in their research significance statement. The researchers caution that the mechanism underlying the dampening is likely to be complex. 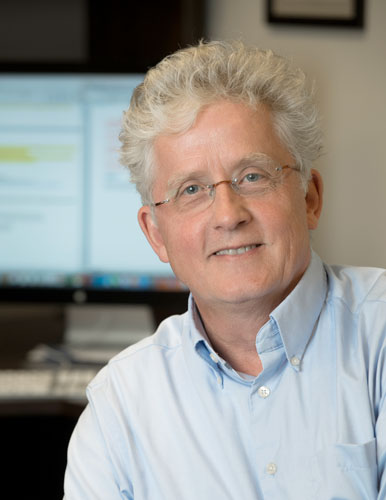 John Chatham, D.Phil., a professor of pathology and a cardiac physiologist.Research details

Glucose, the major fuel for neurons, also controls the levels of protein O-GlcNAcylation on proteins. However, high levels of the dietary supplement glucosamine, or an inhibitor of the enzyme that removes O-GlcNAcylation, leads to rapid increases in O-GlcNAc levels.

In experiments with hippocampal brain slices treated to induce a stable and ongoing hyperexcitability, UAB researchers found that an acute increase in protein O-GlcNAcylation significantly decreased the sudden bursts of electrical activity known as epileptiform activity in area CA1 of the hippocampus. An increased protein O-GlcNAcylation in normal cells also protected against a later induction of drug-induced hyperexcitability.

The effects were seen in slices treated with both glucosamine and an inhibitor of the enzyme that removes O-GlcNAc groups. They also found that treatment with glucosamine alone for as short a time as 10 minutes was able to dampen ongoing drug-induced hyperexcitability.

In common with the long-term synaptic depression provoked by increased O-GlcNAcylation, the dampening of hyperexcitability required the GluA2 subunit of the AMPA receptor, which is a glutamate-gated ion channel responsible for fast synaptic transmission in the brain. This finding suggested a conserved mechanism for the two changes provoked by increased O-GlcNAcylation — synaptic depression and dampening of hyperexcitability.

The researchers also found that the spontaneous firing of pyramidal neurons in another region of hippocampus, area CA3, was reduced by increased O-GlcNAcylation in normal brain slices and in slices with drug-induced hyperexcitability. This reduction in spontaneous firing of CA3 pyramidal neurons likely contributes to decreased hyperexcitability in area CA1 since the CA3 neurons directly excite those in CA1.

Similar to the findings for brain slices, mice that were treated to increase O-GlcNAcylation before getting drug-induced hyperexcitability had fewer of the brain activity spikes associated with epilepsy that are called interictal spikes. Several drug-induced hyperexcitable mice had convulsive seizures during the experiments — this occurred in both the increased O-GlcNAcylation mice and the control mice. Brain activity during the seizures differed between these two groups: The peak power of the brain activity for the mice with increased O-GlcNAcylation occurred at a lower frequency, as compared with the control mice.

Funding for the research came from the National Institutes of Health grant NS076312 and NIH pre-doctoral fellowship NS095568.