On the watch for antibiotic-resistant Mycoplasma pneumoniae

by Jeff Hansen
UAB gets a CDC grant to set up a sentinel surveillance system to track an antibiotic resistant infectious agent responsible for many cases of pneumonia. 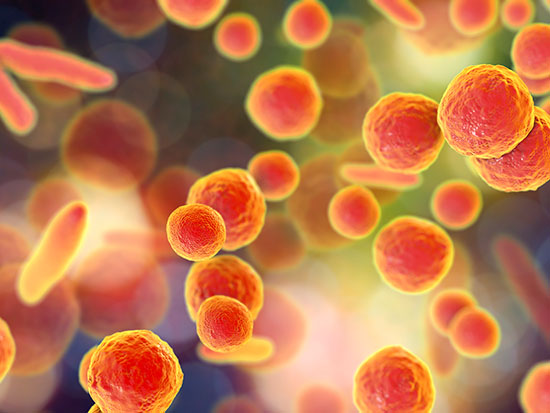 Illustration of Mycoplasma pneumoniae bacteriaIn the army, a sentinel is a guard who stands to keep watch.

Ken Waites, M.D., professor of pathology and director of the UAB Diagnostic Mycoplasma Laboratory, will lead one of those infectious disease sentinels with the help of a one-year, $512,000 contract from the United States Centers for Disease Control and Prevention, or CDC. Waites and colleagues in the UAB departments of Medicine and Pediatrics are setting up sentinel surveillance for Mycoplasma pneumoniae infections at eight medical centers across the United States.

M. pneumoniae is an important cause of respiratory tract infections in children and adults that can range in severity from mild to life-threatening. During the epidemics that occur every few years, M. pneumoniae causes about 20 to 40 percent of community-acquired pneumonias seen in the general population, and 70 percent seen in closed populations such as college dormitories, military barracks and nursing homes.

The new sentinel surveillance program will provide the first U.S. data that also includes clinical information about symptoms of patients and disease severity. Clinical samples that will be evaluated were collected and frozen in 2015-17, with additional samples to be collected during the upcoming year. Thus, the surveillance will cover four years of infections.

Clinical specimens submitted by participating medical centers will be tested at the UAB Diagnostic Mycoplasma Laboratory to confirm the presence of macrolide resistance using molecular methods developed at UAB to detect gene mutations directly in these clinical specimens. Clinical and lab data will be merged in an electronic database for analysis and used to assess the clinical significance and mode of spread for resistant strains.

“This type of surveillance project is particularly important because there is so little information about the extent of macrolide resistance in the U.S. in such a common respiratory infection for which macrolides such as azithromycin are the first-line treatment,” Waites said. “Most clinical laboratories in the U.S. do not offer testing for M. pneumoniae, so treatment is usually given without a confirmed microbiological diagnosis. It is also worrisome that macrolide resistance has increased in Japan and China over the past several years to the extent that more than 90 percent of mycoplasma infections in those countries are caused by macrolide-resistant organisms. We need to know if this resistance is increasing in our country.”

The CDC funding for the UAB-led sentinel surveillance is just one piece of a broad array of CDC antibiotic resistance awards announced this week. The CDC is awarding more than $9 million for 25 research projects at institutions across America which will focus on seven areas of interest identified by the CDC: 1) New diagnostic, sequencing, and metagenomic tools for antibiotic resistance detection and improved antibiotic use; 2) International transmission, colonization and prevention of antibiotic-resistant pathogens; 3) Domestic transmission, colonization and prevention of antibiotic-resistant pathogens and Clostridium difficile infections; 4) Microbiome disruption; 5) Antibiotic-resistant pathogens and genes in water systems and the environment and their contribution to human infections; 6) Medication safety and antibiotic stewardship; and 7) Improving the timeliness, accuracy and usability of public health emergency management, surveillance, survey information and data.