Comprehensive study examines gun-related deaths and how to prevent them

A new study suggests complex solutions to gun-related deaths and goals to decrease rates based on the type of death.
Written by: Justin Marden
Media contact: Alicia Rohan, arohan@uab.edu 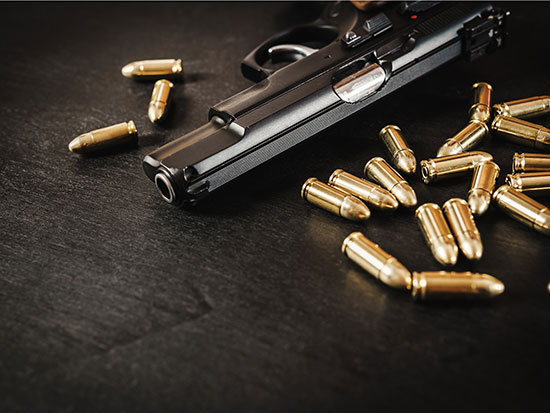 A University of Alabama at Birmingham study provides new insight into gun violence by taking a more in-depth look at gun-related mortality rates and suggesting methods for reducing those rates by focusing on specific components that change based on the type of death.

The study, “A decompositional analysis of firearm-related mortality in the United States, 2001-2012,” breaks down rates of firearm-related deaths into respective components based on firearm availability, injury incidence and deaths among those injured. By separating gun-related deaths into these categories, Russell Griffin, Ph.D., associate professor in the UAB School of Public Health, argues, “researchers are better able to understand the complexity of mortality rates and how to decrease them.”

Unintentional gun-related deaths decreased from 2001-2012, a trend that is attributed to a decreasing case fatality rate, according to the study published in the journal Preventive Medicine. The case fatality rate measures the number of deaths per gun-related injury. As Griffin explains, this is likely due to trauma systems’ becoming more prevalent in states across the nation. “These systems allow for the quick and efficient transfer of patients to trauma centers, preventing death due to circumstances such as extreme blood loss,” Griffin said.

Gun-related homicides have decreased since 2001 despite an increase in the rate of firearm-utilized robberies and assaults per available firearm. Researchers also attribute this to the rise of trauma systems, contending that, since timely trauma care is able to prevent death in injuries from violent crime cases, the actual rate of gun-related homicides has decreased while the reported rate of firearm-utilized robberies and assaults has increased.

A rise in the suicide rate during the same period was due mainly to an increase in the number of available firearms per U.S. population, according to the study. This finding supports prior research reporting a near-direct correlation between the percent of households owning firearms and a nearly four-fold increase in the suicide rate for states with the highest gun-ownership rates compared to states with the lowest ownership rates.

“A lot of the debate recently has been focused on limiting firearm availability; however, firearm availability is not the only way to prevent firearm-related deaths,” Griffin said. “The results of this study suggest that we must have efficient access to trauma care to prevent deaths among those injured by a firearm and, for the homicide rate, a continued vigilance in decreasing the violent crime rate, particularly those in which a firearm is used.”

The study suggests various tactics for dealing with each metric of gun-related deaths. The suicide rate can be directly affected by decreasing firearm availability through safe storage practices, and the homicide rate may be decreased by preventing violent crime and deaths following a gun-related injury. Solutions for unintentional firearm-related deaths are linked mainly to education and safety precautions when dealing with firearms.

Griffin co-wrote the study with two other UAB professors — Jeffrey Kerby, M.D., professor of surgery, and Gerald McGwin, Ph.D., professor and vice chairman of the Department of Epidemiology. Joseph Richardson, Ph.D., associate professor of African-American studies at the University of Maryland, also contributed to the study.