by Jeff Hansen
Such basic research supports the goal of using stem cells in therapy, where an important hurdle is efficient differentiation. 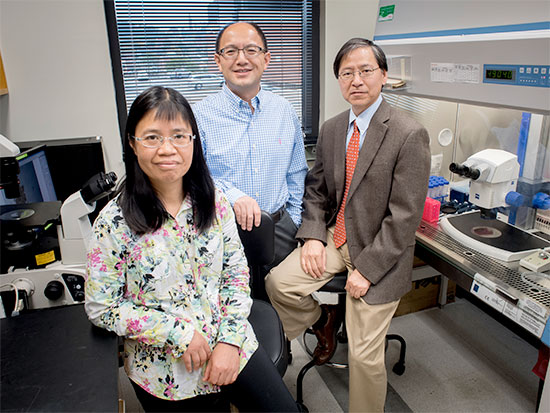 From left: Zhong Liu, Ph.D., Rui Zhao, Ph.D., and Xiaosi “Stan” Han, M.D., Ph.D.The more than 200 different types of human cells have the same DNA but express different ensembles of genes. Each cell type was derived from embryonic stem cells, which are called pluripotent stem cells because they can differentiate to all those different cell fates.

One very active area of biology is cells that mimic these fountainhead embryonic stem cells, cells that are called induced pluripotent stem cells, or iPSCs. With genetic and biochemical tricks, researchers can reverse a differentiated cell — such as a skin fibroblast — into a pluripotent state.

Such iPSCs have the potential to create tissue for regenerative medicine, such as repair heart attacks, create models of human disease or make cells that enable drug screening. But future progress with iPSCs needs a much greater understanding of the basic biology of pluripotency and differentiation.

“For the goal of using stem cells in therapy, the most important step is differentiation from iPSCs,” said Rui Zhao, Ph.D., an assistant professor of biochemistry and molecular genetics at the University of Alabama at Birmingham. “We need to be able to differentiate the iPSCs into a disease-relevant cell type at high efficiency and high purity.”

In a study published in Stem Cell Reports, Zhao and colleagues have partly solved a long-unanswered basic question about stem cells — why are pluripotent stem cells that have mutations to block the production of microRNAs unable to differentiate?

Zhao and colleagues, including co-corresponding author Kitai Kim, Ph.D., of the Sloan Kettering Institute, have found a key that allows those microRNA-deficient pluripotent stem cells to differentiate into neural cells, including subtypes with markers for dopaminergic, glutamatergic and GABAergic neurons.

“For many years, we did not know why these cells did not differentiate,” Zhao said. The answer for neural cell differentiation in the microRNA-deficient cells turned out to be simple — a single microRNA or a single protein.

In the Stem Cell Reports study, Zhao and colleagues show that a microRNA-302 mimic — delivered by a specially constructed lentivirus — was sufficient to enable neural differentiation of mouse embryonic stem cells that lacked Dgcr8, a vital gene for the processing of the more than 2,000 microRNAs in cells.

When they examined gene expression profiles in the differentiated cells, they saw changes in many gene sets regulated by p53, also known as tumor suppressor p53. This tumor suppressor has been called “the guardian of the genome” because of its many roles in preventing DNA damage and cancer.

Zhao, Kim and colleagues showed that microRNA-302 acted to reduce p53 expression in the microRNA-deficient embryonic stem cells by binding to the 3' untranslated region of p53 mRNA.

They further showed that direct inhibition of p53 with the simian virus large T antigen or short hairpin RNA, or even deleting the p53 gene itself, allowed embryonic stem cells or iPSCs to proceed to neural differentiation without the need for microRNA-302. Thus, the differentiation barrier that prevents the neuronal lineage specification from microRNA-deficient stem cells is expression of p53.

The keys to unlock the paths cells to other cell lineage specifications from microRNA-deficient embryonic stem are still unknown, Zhao says.