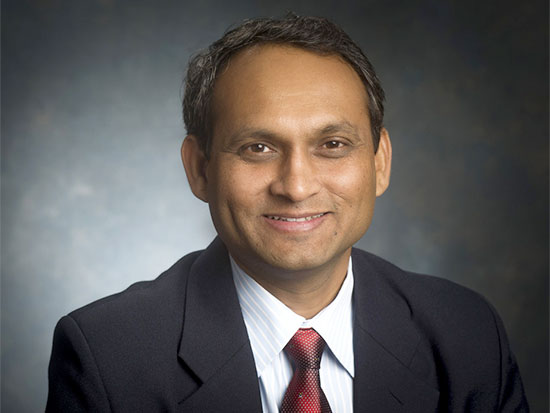 Ganesh Halade, Ph.D.A heart attack triggers an acute inflammatory response at the damaged portion of the heart’s left ventricle. If this acute inflammation lingers, it can lead to stretching of the ventricle and heart failure. The inflammation can claim another victim — the kidneys.

New research shows that a bioactive compound called resolvin D-1, injected as a therapeutic dose, is able to limit this collateral damage in the kidneys, as tested in an animal model. This suggests potential application to the clinical setting.

In experiments led by Ganesh Halade, Ph.D., assistant professor in the Division of Cardiovascular Disease, University of Alabama at Birmingham Department of Medicine, resolvin D-1 was given three hours after a heart attack. Resolvin D-1 is a bioactive mediator produced by immune cells for cell-to-cell signaling, and it is part of the natural innate immune response that resolves inflammation.

Inflammation after tissue injury has two steps — an acute response, where white blood cells rush to the heart to remove dead tissue, and a resolving phase, where inflammation is dampened, reparative macrophages arrive, and scar tissue forms. Both responses are under active control, governed by ‘get in’ and ‘get out’ signals to infiltrating leukocytes, but active control of the resolving response is less well-understood.

In a paper published in The FASEB Journal, Halade and colleagues found that resolvin D-1 limits heart attack-induced kidney inflammation in their mouse model, and they showed three innovative mechanistic actions for resolvin D-1.

First, resolvin D-1 improved leukocyte clearance from heart-attack tissue after the initial acute response. This clearance is paramount because the magnitude of neutrophils' swarming in after a heart attack correlates with early progressive development of congestive heart failure. Resolvin D-1 facilitated this clearance without affecting the acute recruitment response. Resolvin also hastened the change of macrophages in the heart tissue from classic macrophages to reparative macrophages, which indicated an expedited healing response.

Second, resolvin D-1 was able to calm the microRNA storm that develops in heart-attack tissue, and it accelerated production of regenerative microRNAs in the resolving phase after the heart attack. In heart-attack mice not given resolvin D-1, 12 microRNAs were significantly up-regulated and seven were significantly down-regulated. With resolvin D-1, only one was up-regulated and three were down-regulated. MicroRNAs control diverse gene expression in cardiac injury.

Furthermore, resolvin D-1 reduced levels in kidney tissue of the proinflammatory cytokine mRNAs for Il-6, Il-1-beta, Tnf-alpha and Tgf-beta, and it increased the levels for the reparative cytokines Mrc-1 and Ym-1.