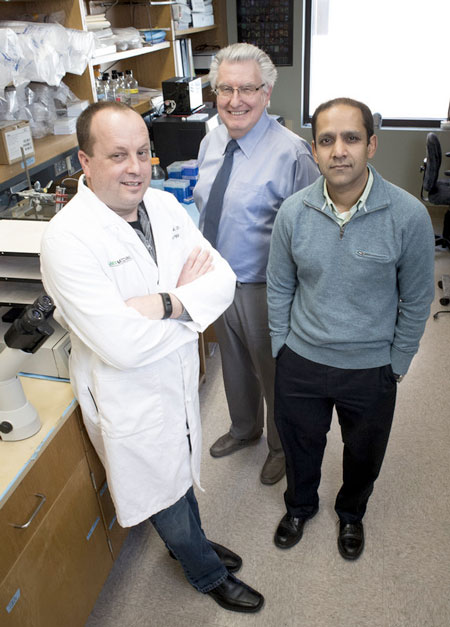 From left: Brant M. Wagener, Jean-Francois Pittet and Rakesh Patel.Human blood from donors can be stored for use up to 42 days, and it is a mainstay therapy in transfusion medicine. However, recent studies looking back at patient records have shown that transfusion with older, stored blood is associated with adverse effects.

For severely injured patients who have massive bleeding and receive many transfusion units, older blood was associated with dysfunction in blood flow, increased injury and inflammation in critical end organs, and lung infection.

In a collaborative study using a mouse model, University of Alabama at Birmingham researchers from the departments of Anesthesiology and Perioperative Medicine, Biostatistics, Emergency Medicine, Pathology, and Surgery have found mechanistic links between older stored red blood cell transfusions and subsequent bacterial pneumonia.

The key player is free heme, a breakdown product from degraded red blood cells. Heme is part of the oxygen-binding hemoglobin pigment that gives blood cells their red color and carries oxygen through the body from the lungs. While in the red blood cell, heme is relatively safe; but once outside the confines of the red cells, free heme is toxic and can cause tissue injury. During storage and upon transfusion, stored red blood cells lyse open, releasing free heme.

In a study led by Patel and Pittet and published in the journal PLOS Medicine, mice were resuscitated after trauma and hemorrhage, using either fresh or two-week-old stored blood. Two days later, they were challenged by instilling the lungs with the bacteria Pseudomonas aeruginosa. A two-week storage of mouse blood approximates storage of human red blood cells for 42 days.

Compared to fresh blood, resuscitation with the stored blood significantly increased bacterial lung injury, as shown by higher mortality, and increases in fluid accumulation and bacterial numbers in the lungs.

A connection between free heme and infection susceptibility and severity was shown two ways. First, Pseudomonas aeruginosa-induced mortality was completely prevented by the addition of hemopexin, a scavenging protein in humans that removes free heme from the blood.

Second, adding an inhibitor of a cell surface receptor called toll-like receptor 4, or genetically removing that receptor from mice, also prevented the bacteria-induced mortality. Free heme — which is known to induce inflammatory injury to major organs in diseases like sickle cell or sepsis — acts, in part, by activating the toll-like receptor 4.

The researchers also found that transfusion with stored blood induced release of the inflammation mediator HMGB1, part of the body’s immune response.

In tissue culture experiments, Patel, Pittet and colleagues found that addition of free heme increased permeability in a sheet of endothelial cells, and free heme inhibited macrophages from ingesting Pseudomonas aeruginosa. Macrophages are immune cells that remove infection by ingesting and destroying bacteria.

Finally, in a 16-month study, the researchers found that human trauma-hemorrhage patients who received large amounts of transfused blood were also receiving amounts of free heme sufficient to overwhelm the normal amounts of hemopexin found in a person’s blood.

“We recognize that many challenges and questions remain and view our data as hypothesis-generating,” Patel, Pittet and colleagues said. “Clinically, our findings underscore the need to establish whether the storage age of transfused red blood cells correlates with increasing levels of free heme after transfusion, and whether low ratios of hemopexin to free heme will identify patients at greater risk for adverse outcomes after massive transfusions.”

Funding came from a Mentored Research Training Grant from the Foundation for Anesthesia Education and Research, UAB School of Medicine and the UAB Department of Pathology.