by Bob Shepard
UAB research suggests protein misfolding, perhaps caused by a reduction in a regulatory protein, could be associated with Parkinson’s disease. 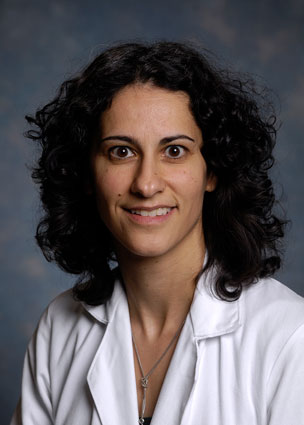 Talene Yacoubian, M.D., Ph.D.Reduced levels of a chaperone protein might have implications for the development and progression of neurodegenerative diseases such as Parkinson’s disease and Lewy body dementia, according to new research from investigators at the University of Alabama at Birmingham. Findings published in the Journal of Neuroscience indicate that the reduction of chaperone protein 14-3-3 could lead to misfolding and spread of a key brain protein from one brain region to another.

Genes are encoded to make a particular protein, using DNA as a set of instructions for how the protein is to be assembled. A protein, a long string of amino acids, needs to assume its correct shape in order to interact with other structures. Proteins that fail to or are prevented from assuming the proper shape — a process called misfolding — are implicated in a number of disease conditions.

Alpha-synuclein is a highly expressed brain protein. While its actual function is not well understood, it appears to be involved in communication between neurons. What is understood is that, when alpha-synuclein misfolds, it forms neuronal aggregates, or inappropriately shaped proteins, that contribute to the death of neurons and are associated with the development of Parkinson’s and Lewy body dementia.

14-3-3s are a family of seven chaperone proteins in humans. In particular, Yacoubian’s group looked at one member of that family, 14-3-3θ, referred to as 14-3-3 theta. In two elegantly designed studies, the researchers investigated the role of 14-3-3θ on misfolding and spread of alpha-synuclein.

In one study, 14-3-3θ was withheld or inhibited in neurons. Observations of alpha-synuclein showed an increase in misfolded proteins, an increase in the spread of aggregates from neuron to neuron, and increased neuronal death. The second experiment involved boosting the amount of 14-3-3θ, which produced a decrease in misfolded alpha-synuclein and limited the spread of the protein across neurons and reduced neuron death. 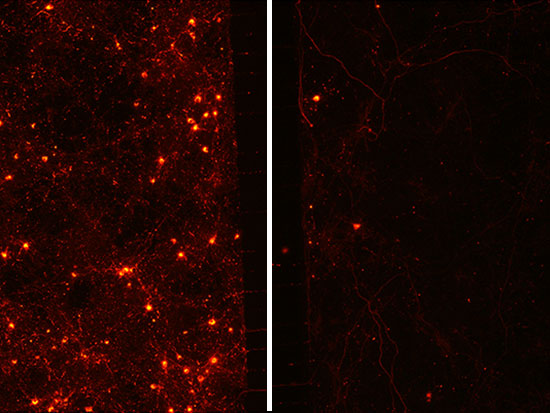 The image on the left shows an abundance of misfolded alpha-synuclein (stained red). The image on the right shows the effect of an increase in 14-3-3θ, preventing the spread of misfolded alpha-synculein to adjacent brain cells. “Our findings indicate that 14-3-3θ plays an important role in the management of alpha-synuclein, keeping it in a more normal folded state and preventing the spread of aggregates across the brain,” Yacoubian said. “The study suggests that 14-3-3θ may be a suitable target for efforts to slow the progression of neurodegenerative diseases, although more work is needed.”

One tantalizing connection to diseases such as Parkinson’s and Lewy body dementia is that both are primarily diseases of aging.

“There is evidence that 14-3-3θ may be age-dependent and the amount present in the brain may decrease with age,” Yacoubian said. “If subsequent research confirms our findings of its role on preventing misfolding of alpha-synuclein, we may have a viable target for intervention in neurodegenerative diseases that are also age-related.”

Yacoubian says studies of 14-3-3θ using animal models are already underway, and she is collaborating with the drug development arm at Southern Research Institute to find a compound that can boost the production of 14-3-3θ and is suitable for use in human studies.