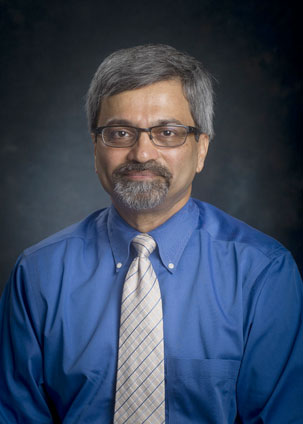 Sumanth Prabhu, M.D.A heart attack triggers an acute inflammatory response, followed by resolution of inflammation and wound healing. A severe heart attack, however, can cause chronic and sustained inflammation that leads to heart failure and death.

In mouse experiments, University of Alabama at Birmingham scientists now have shown a way to hit an immunological “reset button” that ends that inappropriately sustained inflammation. This reset reverses the pathologic enlargement and pumping failure of the heart, and it suggests a therapeutic approach to treating human heart failure.

“To date, there have been no large-scale immunomodulatory or anti-inflammatory therapies for chronic heart failure successfully translated into clinical practice,” said Sumanth Prabhu, M.D., a cardiovascular disease physician and leader of the UAB research, published in the journal Circulation.

Restoring the proper function of T-regs in humans, he said, is “an appealing therapeutic target for the resolution of chronic inflammation in ischemic cardiomyopathy.”

In a previous study published last year, the UAB researchers had seen that CD4+ T-cells —which include T-regs — were globally expanded and activated in mouse heart failure, and there was persistent inflammation and activation of effector T cells, despite the increased numbers of T-reg cells that normally should help resolve inflammation. This led to the hypothesis for the present work — that the T-reg cells in heart failure themselves become dysfunctional, pro-inflammatory and tissue-injurious, and that that altered phenotype contributes to sustained inflammation and the pathologic enlargement of the heart’s main pumping chamber. Such enlargement is known as left-ventricular remodeling.

Some evidence from other researchers working on a different disease supported such a hypothesis — in autoimmune arthritis, the inflammatory microenvironment was shown to alter the phenotype of T-reg cells to a pro-inflammatory state that accelerated damage in the arthritic joint. However, the possibility of T-reg dysfunction had never been explored in chronic heart failure.

In the current Circulation paper, Prabhu and colleagues show that the Foxp3+ T-reg cells in their mouse heart-failure model were indeed dysfunctional. Those T-reg cells expressed pro-inflammatory cytokines and tumor-necrosis-factor-alpha receptor 1, and they had diminished immunomodulatory capability. The dysfunctional T-reg cells also prevented the growth of new capillaries and promoted pathological increase of fibrotic scar tissue in the failing heart.

Furthermore, the UAB researchers showed that the dysfunctional T-reg cells were essential for adverse left-ventricular remodeling. Essentiality was demonstrated by selectively ablating the dysfunctional T-reg cells at four weeks after inducing heart failure. Ablation was done by giving diphtheria toxin to genetically engineered mice that have the diphtheria toxin receptor inserted into T cells at the Foxp3 gene site, or by giving the mice anti-CD25 antibodies.

Importantly, the new T-reg cells produced by the mice after an ablation pulse were no longer pro-inflammatory — instead, they showed restoration of normal T-reg immunosuppressive capacity. Thus, ablation of the pathogenic and dysfunctional T-reg cells acted, in effect, as a reset that restored the mouse T-reg cells back to their normal immunomodulatory function.