by Jeff Hansen
This finding may point to a therapeutic target to treat tuberculosis, which kills 1.3 million people each year. 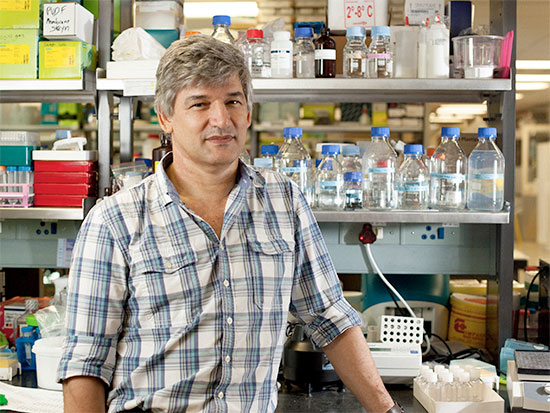 Andries “Adrie” Steyn, Ph.D.Using freshly resected lung tissue from 21 patients and two distinct mouse models, tuberculosis researchers at the University of Alabama at Birmingham and the Africa Health Research Institute, or AHRI, have identified a protein that plays an essential role in host defense against this deadly disease.

The research is led by Andries “Adrie” Steyn, Ph.D., a UAB professor of microbiology who maintains labs at both UAB and the AHRI, in Durban, South Africa. Due to very high rates of tuberculosis, or TB, in South Africa, infected human lung tissue is readily available from nearby hospitals, as patients undergo surgery as a last hope for recovery.

Direct study of microanatomic niches in the fresh lung tissue — including healthy and severely diseased areas — then can reveal the differences in immune responses and cell activity in these distinct regions. Steyn and his research team say this unique approach will aid in identifying potential host factors that could be therapeutically targeted to limit the extensive tissue damage associated with chronic pulmonary TB disease. This dangerous lung tissue, including lungs infected with multi-drug-resistant or extensively drug-resistant TB bacteria, is carefully handled in an advanced biosafety lab at the AHRI because as few as one to three TB bacteria in an aerosol droplet can cause infection. TB infections by the bacterium Mycobacterium tuberculosis, or Mtb, kill about 1.3 million people a year.

Steyn and colleagues were able to separate different types of cells found in distinct niches of human freshly resected TB lungs and characterize those cells for production of the protein heme oxygenase-1. Heme oxygenase-1, or HO-1, is an enzyme that protects cells from harmful reactive oxygen or nitrogen intermediates; HO-1 also is able to control inflammatory responses.

The researchers found that HO-1 in human TB lungs was expressed primarily by myeloid immune cells, including neutrophils and macrophages, and that HO-1 levels in these cells were directly proportional to protection against TB pathophysiology.

Specifically, there was a greater percentage of HO-1-producing neutrophils and macrophages in uninfected areas of the lung than in diseased areas, and those cells in uninfected areas produced more HO-1 than the cells in diseased areas. As a consequence, the lack of HO-1 protection in diseased areas allowed myeloid cell-production of destructive reactive oxygen and nitrogen species. What makes these findings clinically relevant is that HO-1 is essential in humans but not in mice, which points to the importance of examining human TB lung tissue to complement animal models for TB.

“To the best of my knowledge, this extensive analysis of freshly resected human TB lung tissue is the first of its kind, as these lungs are scarce,” Steyn said.

This finding in humans was supported by two HO-1 deficient mouse models that showed HO-1 is necessary to control myeloid cell infiltration and inflammation to protect against TB progression. One mouse model was a global knockout of the HO-1 gene; the other model was an HO-1 knockout in myeloid cells only. In both models, knockout mice had more susceptibility to Mtb infection — the knockout mice died sooner and had higher loads of Mtb in their lungs and spleens. The knockout mice also had increased infiltration of immune cells and levels of cytokines, the cell-signaling proteins that regulate or stimulate immune responses.

Overall, the findings from human lungs and the mouse models showed that expression of HO-1, especially within myeloid cells, appears to be essential for host defense against Mtb disease progression. For human TB patients, Steyn says, the research suggests that finding a way to upregulate HO-1 activity might limit immunopathology during active TB disease.

This research was published Nov. 13 in the journal Cell Reports, and it is also featured on the front cover of the journal. 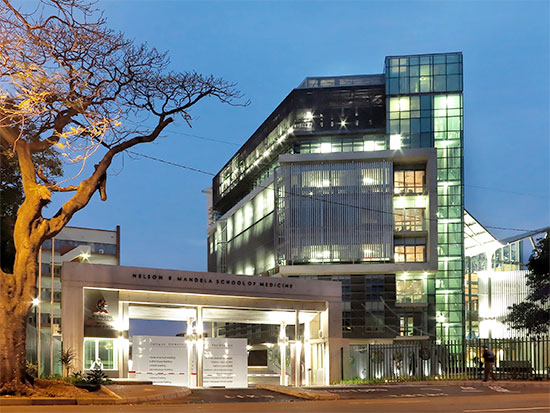 Steyn is a professor and primary faculty at UAB Department of Microbiology and maintains a research laboratory at UAB. He is also a full-time investigator at AHRI and lives in Durban, South Africa. He visits UAB at least six times a year.

Steyn is responsible for creating a program where students from UAB Graduate School and School of Medicine get a unique opportunity to visit and conduct research at AHRI as part of research training internships. “Once you go to remote areas in Africa and see the devastation of the disease,” Steyn has said, “it just changes you. It makes a difference.”

Working at AHRI gives students, especially those in the medical training program, an excellent opportunity to work in a state-of-the-art research facility located in a country with one of the highest disease burdens in the world. Seven UAB Ph.D. and M.D./Ph.D. students have done research in Steyn’s lab in Durban as part of the annual UAB-AHRI International Summer Research Program.

Steyn’s Cell Reports work follows an earlier study also using human TB lung tissue. That study, published last May in Frontiers in Immunology by Steyn and colleagues, examined the distribution of iron in diseased TB lungs. Iron is an essential factor for the growth and virulence of Mtb, but little was known about how the host controls iron availability during infection.

Steyn and colleagues found an essential role for the ferritin H iron-storage protein in the control of TB, which is directly linked to HO-1. The researchers found that a mouse model that had a knockout of the ferritin heavy chain gene in myeloid cells was more susceptible to TB, as shown by increased numbers of Mtb in organs, more spread of Mtb beyond the lungs and decreased survival. Notably, reduced levels of iron were found in human TB lungs.

Support for this work came from National Institutes of Health grants AI111940, AI127182 and DK59600; the Bill and Melinda Gates Foundation award OPP1130017; and the South African Medical Research Council. Support also came from the UAB Center for AIDS Research and the UAB Center for Free Radical Biology.