How to protect the elderly in the heat

by Holly Gainer
Adults who are 65 or older are more susceptible to the heat. 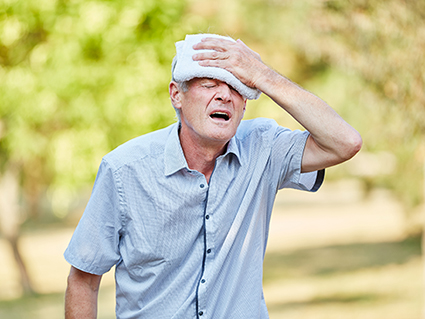 The best way to protect older adults from overheating is by making sure air conditioning and fans are used during hot months and that they are not outside for prolonged periods of time. When a heatwave hits, people tend to make sure children or pets are not left outdoors or in cars for prolonged periods of time, but the elderly – one of the most vulnerable populations – are often overlooked.

In June, the family of an elderly woman in Montgomery said she suffered a heat stroke and life-threatening injuries after being left in her assisted living facility’s bus for six hours after returning from a field trip. In 2003, 15,000 people died during a heatwave in France. Most of the victims were older people left in city apartments and retirement homes without air conditioning.

Andrew Duxbury, M.D., a geriatrician in the Division of Gerontology, Geriatrics and Palliative Care at the University of Alabama at Birmingham, explains how to protect elderly loved ones.

Why are older adults more susceptible to heat-related illnesses?

“People who are 65 or older are more susceptible to heat-related issues because they may be socially isolated. We often check on the babies, but some may not remember to check on the elderly,” Duxbury said.

“A younger person’s body is able to handle the stresses and strains of excessive heat better than an older person’s,” Duxbury said. 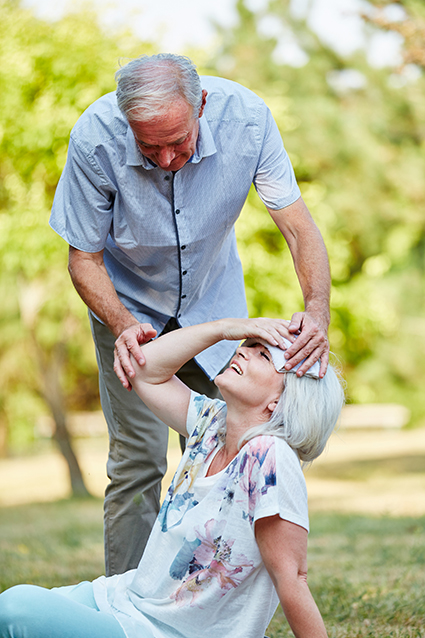 Adults who are 65 or older are more susceptible to the heat.What are the most common heat-related issues?

Heat stroke and heat exhaustion are the most common illnesses caused by overexposure to high temperatures.

Heat exhaustion occurs when someone has been exposed to heat for too long and begins to not feel well. Duxbury says people usually become cold and clammy or sweaty and nauseated.

Heat stroke is when there is so much heat coming into the body that it overwhelms the senses. It causes one’s temperature to spike, and the person becomes red and hot.

“If you find someone in a hot environment and they are red, dry and hot to touch, you need to seek immediate medical attention for that person,” Duxbury said. “That is an emergency, and that is heat stroke.”

Duxbury says, if someone does not seem mentally impaired, acts normal, but is sweating and complaining of not feeling well, it may not be a medical emergency. The best thing to do is take that person to a cool environment and monitor them until they feel better.

How do you protect older adults in the heat?

The best way to protect older adults from overheating is by making sure air conditioning and fans are used during hot months.

“A lot of times, in heat waves, elderly people are unable to leave their apartments or houses to cool down by going to the mall, the movies or the pool,” Duxbury said. “They may also be immobile and unable to turn the air conditioning on in their home. Some may not run the air conditioning as a way to cut down on their power bill.”

Caregivers need to make sure their loved one is able to turn the air conditioning on and understands the importance of using it, particularly if there may be a cognitive impairment.

“If you have an older parent and do not live in the same city, make sure you talk to that person on a daily basis,” Duxbury said. “If they aren’t talking the way they normally do, then call a neighbor, call a friend or someone you trust and have them go check on them right away.”

Hydration is another key element.

“In older people, the thirst mechanism does not work as well as it does in younger people,” Duxbury said. “So they may not feel thirsty, but they could become dehydrated quite easily.”

Duxbury says to keep water next to the bed or chair, so they have access to water at all times.

One way to check for dehydration is to pull up the skin on the back of the hand for a few seconds; if it does not return to normal almost immediately, the person is dehydrated.

For more information about protecting the elderly in the heat, visit the Centers for Disease Control and Prevention website.