Thanksgiving can be a time to heal, deal with remorse of natural disasters

Natural disasters made 2011 a loss-filled year. A UAB psychologist says plan ahead and don’t over commit.

It started with blizzards. Tornadoes followed. Flooding ensued. 2011 has been filled with natural disasters — deadly and devastating — and Thanksgiving may be the year’s first family holiday where things look different around the dinner table. 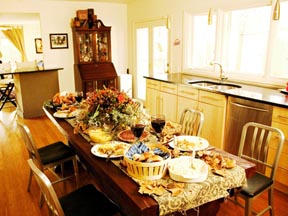 Natural disasters are blamed for hundreds of deaths nationwide, and it has been one of the deadliest years in the United States since Hurricane Katrina hit in 2005, according to the National Climactic Data Center. In Alabama alone, 255 people were killed during two tornadoes in April, according the Alabama Emergency Management Agency.

“For survivors of natural disasters from earlier this year, this may be a very different holiday season; they’re grateful for their lives, but guilty that they survived when others didn’t,” says Joshua Klapow, Ph.D., a clinical psychologist at the University of Alabama at Birmingham.

“As families gather, many will be reminded of the ones who perished and will not feel holiday joy this year,” Klapow says.

Klapow says the biggest challenge in the first year following the loss is reconciling the deep feelings of grief when the rest of the world appears to be joyous and festive.

Planning is the best way to cope, Klapow says, and makes these suggestions:

“As the saying goes, time heals all wounds and with each passing year, a new normal will begin to emerge.”