by Jim Bakken
There is an association between the influenza virus and cardiovascular events like heart disease and stroke; those with cardiovascular disease should protect themselves against the flu.

For years there has been a known association between the influenza virus and cardiovascular events like heart disease and stroke, explains University of Alabama at Birmingham cardiologist Steven Lloyd, M.D., Ph.D., FACC, associate professor of medicine and radiology. 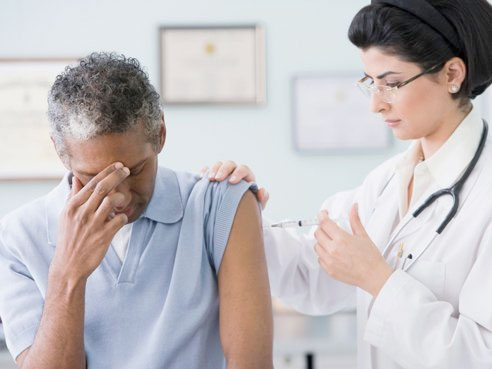 Lloyd says anyone with cardiovascular disease should protect themselves from the flu.

Of adults hospitalized due to flu during the 2010-2011 flu season, heart disease was the most commonly occurring chronic disease, according to the Centers for Disease Control and Prevention.

Lloyd, who is also president of the Alabama chapter of the American College of Cardiology, recently told Medpage Today that a new study from researchers at the University of Toronto further strengthens the common recommendation that patients with cardiovascular disease get vaccinated against the flu.

“There have been several smaller research projects in the past that led to this belief,” Lloyd said. “But this new meta-analysis is a relatively large trial with a total of more than 6,700 patients, which will be more respected in the medical community.”

The study did show a definite benefit of the flu vaccine in patients with cardiovascular disease, Lloyd says, with 1 in 56 believed to have not experienced some kind of cardiovascular event because they were vaccinated.

“The reason this association exists is not fully known, but it’s possibly due to a number of factors,” Lloyd said, noting that patients who tend to get worse flu viruses tend to be old and frail. They may get pneumonia associated with the flu or have systemic inflammation or other things that may cause plaques in the coronary arteries to rupture. If they get admitted to the hospital for treatment and get large amounts of IV fluids, it could provoke congestive heart failure.

“The flu itself could be inciting a heart attack, or it could be the treatment of the flu actually making cardiovascular issues worse,” Lloyd said. “It remains unclear.”

Lloyd also mentioned that, while there are limitations to the meta-analysis, he thinks it will prompt an interest in designing and following up with a large randomized trial to learn more on the flu and cardiovascular disease.