An approved treatment for pink eye could be on the horizon

by Jim Bakken
When a prime-time sportscaster went on the air to cover the Sochi 2014 Winter Olympics with pink eye, the world took notice. One UAB optometrist says this virus currently lacks an FDA-approved drug, but she has a planned study to solve that.

When a prime-time sportscaster went on the air to cover the Sochi 2014 Winter Olympics with pink eye, the world took notice of the obvious symptom of the swollen, red eye. One University of Alabama at Birmingham optometrist says this virus currently lacks an FDA-approved drug, but she has a planned study to solve that. 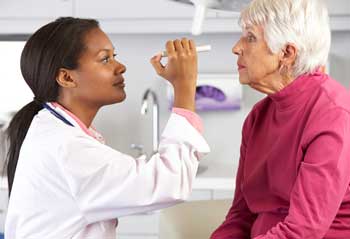 “The true ‘pink eye’ is caused by an adenovirus, is highly contagious, and can last for up to three weeks; but the virus can live on inanimate objects like door knobs and keyboards for up to 45 days,” said Tammy Than, M.S., O.D., FAAO, associate professor in the School of Optometry. “Without a treatment — right now it’s just time and artificial tears — these viruses can in the meantime spread to family members, colleagues, classmates and others.”

Than notes another issue with pink eye is that it can be hard to diagnose.

“When people come in with red eye, it could be bacterial infection, it could be viral, or it could be allergic, so oftentimes it’s misdiagnosed because the symptoms overlap,” Than said, adding that there is a relatively new point-of-care test that is inexpensive and has very good sensitivity that can help guide treatment with Betadine. “This has really helped us make a more accurate diagnosis of the cause of a patient’s conjunctivitis.”

In addition to the noticeable swollen, red eye, Than says pink eye’s symptoms can also be painful.

“It causes miserable discomfort, tearing, sensitivity to light and possibly decreased vision,” Than said. “Plus, the suffering is worsened because the person himself typically has it in one eye, but often the other eye becomes infected as well because pink eye is so contagious.”

Than is part of a multicenter research project called RAPID, Reducing Adenoviral Patient Infected Days, looking at the treatment of pink eye with Betadine. Than says this common, pre-surgical solution has been used by eye doctors off-label to treat the virus, but there is no solid data yet on its efficacy.

“I have used Betadine as a treatment for years and have seen complete resolution within 24 to 48 hours,” Than said. “But, this treatment should be administered only under the supervision of an eye care provider.”

RAPID researchers will submit their grant proposal to the National Institutes of Health in March.