Awareness and research are paramount when it comes to glaucoma

by Jim Bakken
Research exploring several new diagnostic strategies to find the earliest changes in the eye to detect glaucoma is underway at the UAB School of Optometry. One optometrist says awareness of this eye disorder is just as important as continuing to study it. 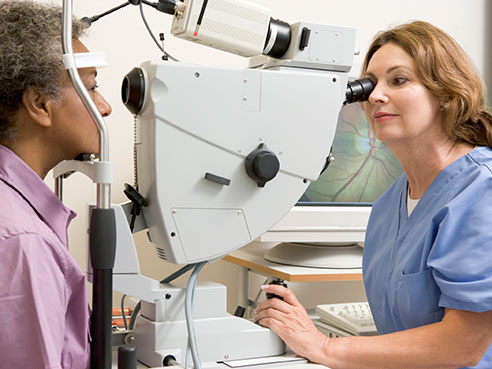 Research exploring several new diagnostic strategies to find the earliest changes in the eye to detect glaucoma is underway at the University of Alabama at BirminghamSchool of Optometry. One optometrist says awareness of this eye disorder is just as important as continuing to study it.

Glaucoma is the second leading cause of blindness in the United States, according to the American Optometric Association, with primary open-angle being the most common form of it. Glaucoma is most likely to affect people over age 40 and those with a family history of the condition.

“Anyone with a family history of glaucoma should be checked as early as possible in adulthood and monitored regularly,” said Leo Semes, O.D., professor of optometry. “Subsets of glaucoma are found in those who have trauma in one eye, in those who are from areas closer to the Arctic Circle, and in certain other situations including infantile and congenital occurrences.”

When it comes to determining how often to check the eyes for signs of glaucoma, Semes says it depends on the degree of suspicion.

“But the greatest risk factor and the only currently modifiable one is elevated intraocular pressure, or pressure in the eye,” Semes said. “This may be more critical with increasing age, which is also a risk and may be related to perfusion to the optic nerve. This is a topic of research and controversy at the moment.”

Semes says because glaucoma generally comes with no early warning signs, those unknowingly affected by it run the risk of vision loss.

“As I like to say, ‘glaucoma is like ignorance; it’s not painful,’” Semes said. “So damage can be done before it becomes significantly visually debilitating.”

The exact cause of glaucoma remains unknown, and Semes says there is little in the way of complementary and alternative medicine strategies to help prevent it.

But, Semes noted the following behaviors may be beneficial:

Also at UAB, new medications and delivery routes to maximize compliance and minimize damage from glaucoma are being studied.