by Jim Bakken
The ongoing Ebola outbreak in West Africa is the most extensive known outbreak of this disease. While the risk of globalization is low, says one UAB expert, awareness is important. 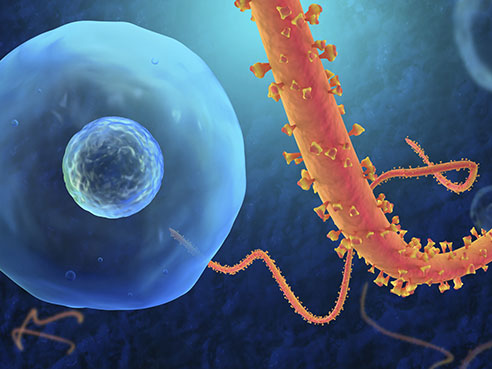 Disease outbreaks can come on suddenly or slowly over time, and one University of Alabama at Birmingham global health expert says the heightened sense of awareness they cause is warranted.

Currently making headlines is the Ebola virus, which causes a severe, often fatal illness in humans that arises primarily in remote villages in Central and West Africa in areas where fruit bats are eaten, according to the World Health Organization.

“Ebola outbreaks are scary, and rightfully so,” said Craig Wilson, M.D., professor in the UAB Department of Epidemiology in the School of Public Health and director of the Sparkman Center for Global Health.

“Ebola outbreaks are so dramatic because the case fatality rates, or the percentage of people with a certain disease who die from it, can be up to 90 percent,” Wilson said, noting that this current outbreak is at about 60 percent. “It causes many affected to die, and they die in a dramatic and rapid manner in areas where there is little medical support.”

The concern with this recent outbreak, Wilson says, is that it has moved into more populated areas compared to prior, more geographically remote rural areas.

“The areas of Africa getting hit hardest by Ebola right now need resources to combat the disease, but that is expensive as those items don’t exist in that country,” Wilson said. “Many of the basic items needed relate to infrastructure and include running water, intravenous fluids, gloves, masks and established good infection control practices.”

Wilson says the current situation is compounded by local burial practices and even beliefs around what causes disease.

“There are now attempts to scale up to meet the infrastructure needs, including the more elaborate protective gear used when handling large numbers of cases and bodies,” Wilson said. “The issue has been two-sided as the recognition of the severity and extent of the outbreak was underestimated for months, and this outbreak is occurring in areas that had not seen prior outbreaks.”

Wilson says having resources available is what will keep the United States shielded from the dangers of Ebola.

“Yes, there is potential for someone traveling in Africa to be exposed to Ebola and then bring it back to the U.S., which is why we need to remain alert,” Wilson said. “But generally we do not have to worry about it here in the United States on a population basis, because as soon as a case is identified, even standard infection control practices that exist in all health care facilities would substantially contain the disease.”

Ebola is harder to contract than many viruses.

“The difference with Ebola compared to something like influenza is that Ebola transmission requires direct contact with an infected person or their bodily fluids, and it is not transmitted via aerosol,” Wilson said. “So there is little to no concern about someone with Ebola traveling on a plane and infecting a planeload of people.”

As far as outbreaks go, Wilson says influenza can cause some of the worst.

“Influenza epidemics are scarier because of just how easily flu can be spread from human to human, and the death rate can change on a yearly basis,” Wilson said. “Recall that as recently as 2009, over 550,000 deaths occurred worldwide in 75 countries from the H1N1 strain. Here we are approaching 1,000 deaths, which is how many people die of HIV every hour globally.”

Wilson says, when comparing Ebola to other disease outbreaks, it is far worse than chikungunya, a more regional emerging epidemic, as chikungunya — although debilitating — is rarely fatal. Another disease emerging regionally as well as globally is dengue fever, where a first infection is rarely fatal and a second exposure is generally the more severe form of the disease.

“These two diseases have remained more contained given they are transmitted only via mosquitoes,” Wilson said.

“There’s been a lot learned over the years as disease outbreaks have occurred, so thankfully we’ve been able to put an infrastructure into place to best approach infection control,” Wilson said. “We have very solid standard approaches for many of these challenges.”