by Tyler Greer
While babies are born with very little vitamin K, and the only way to sufficiently supplement it is through an injection soon after birth, some parents are shying away from the shots.

The growing trend of parents’ shunning vaccines has crept into another area that has physicians recommending caution — forgoing vitamin K shots in newborns.

Avoiding the shots, which are given to prevent internal bleeding in the brain and intestines, can result in dire consequences for newborns, says DeeAnne Jackson, M.D., medical director of the UAB Hospital Newborn Nursery and associate professor in the School of Medicine.

“Newborns have been receiving vitamin K booster injections since 1961 to prevent internal bleeding,” Jackson said. “These injections are necessary because babies have very low levels of vitamin K at birth, which can lead to serious bleeding problems if not supplemented. It is an essential nutrient babies need to assist the body in blood clot formation.”

Some parents have recently begun saying no to vitamin K shots in what is believed by caregivers to be an extension of those who do not want their child to have any vaccines. Recent incidents in Tennessee and Ohio where children did not receive vitamin K shots have heightened awareness in caregivers to further explain to parents the need for the supplement. 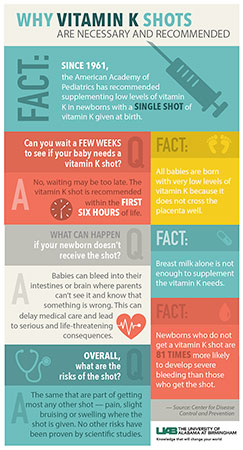 When the U.S. Centers for Disease Control and Prevention further investigated, it found that 28 percent of parents with babies born at private birthing centers in Nashville had refused the shot.

In a recent issue of the Journal of Emergency Medicine, doctors in Ohio documented a case where a 10-week-old was found to have experienced bleeding around the brain after parents refused both the vitamin K shot and the hepatitis B vaccine, also normally given to newborns. The parents brought the child to the emergency room when the mother noticed flecks of blood in the baby’s stool. Emergency physicians were able to stop the bleeding around the brain before it became severe with an infusion of vitamin K.

Jackson encourages parents who are concerned about vitamin K shots or any vaccines their children should receive after birth to talk to their physicians and pediatricians.

“I would encourage parents who may be nervous about vitamin K shots or vaccines to start these conversations prior to their baby’s delivery so they can learn more about why these treatments are recommended ahead of time,” Jackson said. “You really shouldn’t wait to see if your baby needs a vitamin K shot after birth, because delaying medical care can lead to serious and life-threatening consequences.”

Visit the Centers for Disease Control and Prevention website to learn more.