by Bob Shepard
Vape pens are catching on, but there is a hidden danger. They sometimes blow up, and a UAB burn surgeon says the results are decidedly unpleasant. 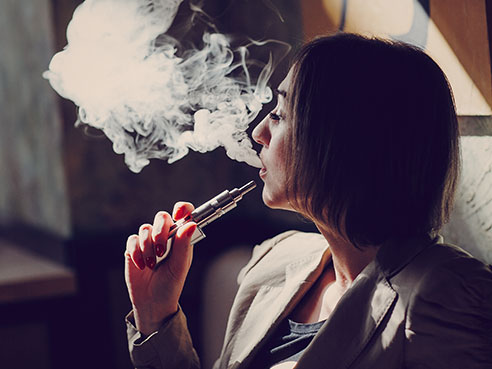 A quick search of “vape pen injuries” turns up a slew of hits: CBS News, Denver Post, Reddit, AOL. There is no shortage of stories of electronic cigarettes or vaporizer devices that exploded or caught on fire.

A United States Fire Administration 2014 report says there are more than 2.5 million American users of the devices, and cites 25 incidents reported in media outlets of e-cig or vape device explosions between 2009 and 2014.

University of Alabama at Birmingham burn and plastic surgeon Chandra Ellis, M.D., who directs the burn program for the Division of Acute Care Surgery in the Department of Surgery, has operated on two patients injured by vape pen explosions, and treated another five patients in clinic.

“Vape pens, or the larger, more powerful vape mods, are powered by lithium-type batteries, which patients have reported exploding in their pockets, ” said Ellis, an assistant professor of surgery in the UAB School of Medicine. “If an explosion occurs when the pen is held at or near the mouth, we can see severe burning of the tongue and soft tissues of the mouth and throat.”

Ellis says vape explosions may lead to second- and third-degree burns, often requiring surgery in the form of skin grafting. Scarring can be long-lasting, and an explosion while in the mouth can lead to broken teeth and a fractured jaw bone.

“While these devices are billed as a safer alternative to cigarettes, don’t believe the hype,” Ellis said. “They can cause serious injuries in their own right.”

E-cigs, vape pens and vape mods vaporize a liquid that typically contains nicotine, flavorings, and a base of vegetable glycerin or propylene glycol. An atomizer, powered by the battery, heats the liquid and creates vapor that the user then inhales. Vape pens tend to have larger batteries than e-cigarettes, and vape mods typically have even more powerful batteries than the smaller pens.

The U.S. Fire Administration report suggests the shape and construction of e-cigarettes and vape pens can make them more likely than other products with lithium-ion batteries to behave like “flaming rockets” when they fail. The report says lithium-ion batteries must be recharged in accordance with the manufacturer’s instructions, and using nonapproved power sources can result in explosion and fire.

Ellis says continued use of e-cigs or vape pens after an injury is also an issue.

“I’ve seen patients with injuries from vape pen explosions continue to use the devices, which is detrimental to healing, especially when they contain nicotine,” Ellis said. “Nicotine impairs healing and interferes with the body’s efforts to recover from burns. I strongly discourage the use of e-cigarettes, vape pens and vape mods. The risk of serious, potentially permanent injury from an explosion is just too great.”