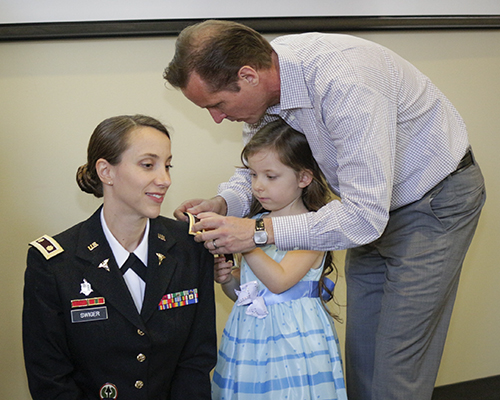 PhD student Pauline Swiger was officially promoted to the rank of lieutenant colonel in the United States Army and her daughter, Lillian, and husband, Eric, pinned on the insignia of her new rank during a ceremony held at the UAB School of Nursing. University of Alabama at Birmingham (UAB) School of Nursing Doctor of Philosophy in Nursing (PhD) student Pauline Swiger, MSN, RN, CMSRN, CNL, has been promoted to lieutenant colonel in the United States Army.

Donna Brown Banton Endowed Professor in the School Pat Patrician, PhD, RN, FAAN, a 26-year veteran of the U.S. Army Nurse Corps and Swiger’s mentor, officiated the promotion ceremony and administered the oath of office. Swiger’s mother, Geraldine Potter of Manchester, New Hampshire, husband, Eric, and daughter, Lillian, officially pinned on the insignia of her new rank as daughters Lauren and Brittany joined in by phone from San Antonio.

Swiger was particularly appreciative that Patrician and other colleagues in the School put together a ceremony and reception to mark her special achievement.

“This could very easily have been a day that just passed by given that I am not close to a military installation or have the normal support of non-commissioned officers or other officers to make sure that these things happen,” Swiger said. “But Dr. Patrician said ‘We are not going to let this just go by. It is such an honor to be promoted, and it’s such a big deal, you will celebrate this.’

“They rallied around me and made it happen, and it says something about the community and the family here at the UAB School of Nursing that they would do this for me. I feel very much at home here.”

Patrician noted that in Swiger’s 16-year military career she has been moved to various assignments fairly frequently and “that’s a sign of someone who is a mover and a shaker.” Some of Swiger’s postings have included a deployment to Bosnia as an emergency room nurse with Task Force Med Eagle, a stop at the West Point Military Hospital where she was promoted to head nurse in the health clinic, and a deployment to Baghdad with the 28th Combat Support Hospital where she worked as part of a research team.

“Pauline has displayed excellence throughout her military career and she continues to do so in the doctoral program here in the UAB School of Nursing,” Patrician said.

For more information about the UAB School of Nursing PhD program, click here.