Veterans CAN! Program a life-changer for Tanisha Jordan

By Jimmy Creed
Like many prospective nurses looking for the right school, University of Alabama at Birmingham (UAB) School of Nursing Bachelor of Science in Nursing (BSN) student Tanisha Jordan turned to the internet to help her in her search.

It was there, on a Facebook page devoted to information about the United State Air Force Nurse Enlisted Commissioning Program (NECP), that Jordan first learned of the UAB School of Nursing and its Veterans Career Advancement in Nursing (Veterans CAN! or VCAN!) Program.

Intrigued, the nearly 15-year active duty Air Force Space Operations Operator and single parent of young son, Justen, began to dig deeper into a school and a program she had never heard of before. What she learned put her on a path to becoming the nurse she believes she was destined to be.

“I have always been the type of person who likes to help people when they are sick or injured,” Jordan said. “As a kid, my cousins would fall and I would be the first person there going ‘let me see what’s going on with you.’ I feel like nursing is something I was born to do. It just took me a while to figure it out.”

Her research into the UAB School of Nursing, especially its consistently upper 90s percentile of graduates passing the National Council Licensure Examination (NCLEX), and the VCAN! Program told the Waycross, Georgia, native UAB was where she ought to be. Her decision was further confirmed when she began calling and asking for information on the School. 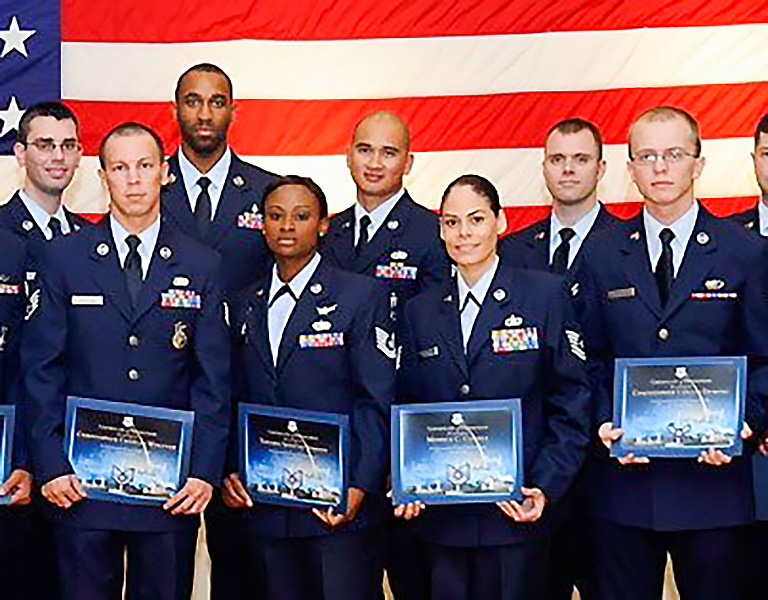 Tanisha Jordan, front row, second from left, is a proud member of the United States Air Force and proud to be a full-time student in the UAB School of Nursing's Bachelor of Science in Nursing (BSN) program.

“The most important thing for any nursing student is what are the school’s NCLEX scores?” Jordan said. “I chose the UAB School of Nursing because at the time I was looking, it had nearly a 96-percent pass rate on the NCLEX which was excellent compared to other schools around the country.

“I was also coming in as a transfer student, and that is always a tough battle to call people on the phone to get the help you need. But no matter what time of day I called here at UAB, the people always went out of their way to help me. If they didn’t know, they would go find out from someone else or transfer me to someone who could help me. It was always a good experience when I called UAB.”

Finding the VCAN! Program has proved a blessing in many ways as well, Jordan said.

The VCAN! Program, a special initiative of the School through a grant from the Health Research Services Administration (HRSA), allows veterans to transition into a professional nursing career and earn a BSN degree. The NECP allows enlisted Air Force members who want to earn a BSN and become a commissioned officer nurse to attend an accredited university full-time while remaining on active duty.

Inspired by her stepmother who is also a nurse, Jordan is pursing her dream through the VCAN! Program though she admits it is not easy. Early on in her time as a nursing student Jordan encountered some struggles, but in working through those she has learned another valuable aspect of what the UAB School of Nursing and the VCAN! Program has to offer.

“For me, the VCAN! Program has been the best thing because of all the support they give you,” Jordan said. “In deciding to go to school, I first needed to make sure my son’s education didn’t suffer, and my parents stepped up to help with that. Then I needed to make sure that once I got here I had the tools in place to make me a successful nursing student, and VCAN! has given me those tools.

“Being able to go to my instructors or others in my cohort and say, ‘I’m struggling. Please help me,’ has been life changing.”

Assistant Professor and VCAN! Program Director Rhonda McLain, PhD, RN, is one of those who has answered Jordan’s calls for assistance. McLain has been there for her to lean on, to listen and to lend her expertise. The two now have hour-long weekly sessions in which McLain helps Jordan think things through like a nurse.

“Tanisha needed that little extra academic support, and that is what the VCAN! Program is really about. We try to meet all students needs, whatever their needs are.”

Jordan is appreciative of all the help she has received from McLain.

“Nursing school isn’t easy, but with instructors here like Dr. McLain and others, it’s doable. I would definitely recommend it to anyone who is interested,” Jordan said.

As Jordan, the other 10 students with active-duty military experience in the current VCAN! cohort, the School and the nation prepares to observe Veterans Day, she is also appreciative of her brothers and sisters in arms from the past who have helped ensure she could choose her own path to the future.

“It took a lot of blood, sweat and tears by others for us as Americans to be able to do the things we want,” Jordan said. “A lot of people sacrificed their lives, and we can never forget that. For me, Veterans Day is a time to say ‘thank you’ to all the people who sacrificed so much so I could choose the school and the career path I want to follow and come here and try to make that dream come true.”
Read 11500 times Last modified on November 22, 2016
Tweet
Tagged under