BSC partnership ‘a win for both schools’ 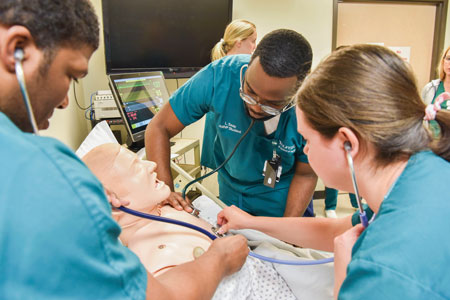 The UAB School of Nursing and Birmingham-Southern College are providing a new pathway for BSC students to enter graduate nursing studies through UAB’s Accelerated Master’s in Nursing Pathway.

“We are excited to offer this opportunity to BSC students whose diverse backgrounds and experiences in the liberal arts and sciences will continue to develop and grow the talent pool in nursing,” said UAB School of Nursing Dean and Fay B. Ireland Endowed Chair in Nursing Doreen C. Harper, PhD, RN, FAAN.

“Former Birmingham-Southern President Linda Flaherty-Goldsmith approached us looking for more opportunities for their students to continue into graduate studies and knew UAB had a nationally-ranked nursing program,” said Assistant Dean for Student Success Peter Tofani, EdD, LTC(R). “She called a meeting with Dean Doreen Harper and asked, ‘What can we do?’”

Under BSC’s previous agreement with another four-year university, students were required to select an area of health care in which to focus early on in their studies, said BSC Health Professions Adviser Sue Buckingham, PhD.

“That is really difficult to decide if you are an undergraduate student and have not worked in a hospital or health care,” Buckingham said. “Collaborating with UAB is more effective because students can shadow at the hospital to get a better idea of what RNs and NPs do before making a decision.” 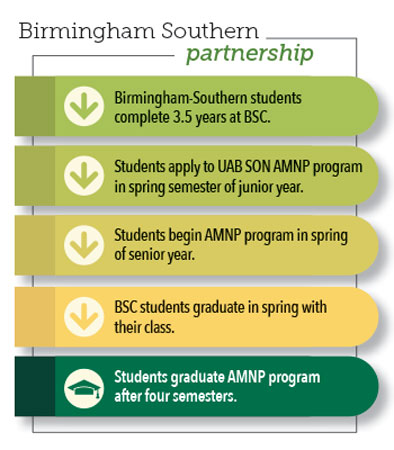 “The students still graduate with their classmates at BSC even though for that last semester they are on UAB’s campus in the nursing program,” Tofani said.

This partnership is a positive recruiting tool for BSC, Buckingham said, and students have already expressed an interest.

“Our pre-nursing interest has really spiked with incoming students,” she said. “Every student I talk to wants to go to UAB if they’re pre-health.”

The agreement is a win for both schools, Tofani said, also bringing strong students into the School of Nursing.

“We’ve had Birmingham-Southern students in both our traditional undergraduate BSN program and AMNP, and they historically have had over a 95 percent pass rate,” Tofani said. “It’s a population that has been well-prepared, and students are very successful at making the transition into our program.”

Since the partnership launched in early 2018, Buckingham said she already has seen tremendous interest among BSC’s sophomore and junior students.

“We are taking talented students from the area and from around the state and encouraging them to stay in Birmingham and use their talents here,” Buckingham said. “We have some great students, and I’m very happy that they’re going into nursing.”

Tofani said he expects the pipeline of students to be fully up and running in a few years. At that point, there should be around five AMNP students coming from this partnership each year.