Langston has served the chapter in a variety of leadership roles 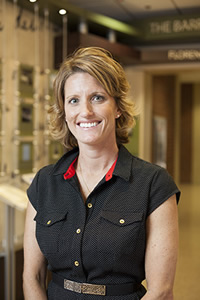 Summer Langston, DNP, CRNP, ACNP-BC, AACC, assistant professor in the University of Alabama at Birmingham (UAB) School of Nursing has received the "Volunteer of the Year" award from the Alabama Chapter of the American College of Cardiology (ACC). This award is given annually to a deserving member the Alabama ACC chapter.

Langston became a member of the ACC in 2008. At the time she was a student in the Doctor of Nursing Practice (DNP) program in the UAB School of Nursing and working as nurse practitioner at the Alabama Cardiovascular Group in Birmingham.

In 2008, during research for a course in the DNP program, Langston reached out to members of the ACC for additional information pertaining to her project. After working with the organization and learning about their mission she applied for a travel grant to attend the ACC annual conference. Langston joined the organization later that year.

She has served on the educational board since 2008 and served as the Cardiac Care Associates (CCA) state liaison from 2011-2014. Langston was recently reelected for a second term as the CCA state liaison and was recently advanced to Associate of the ACC (AACC). She is the only nurse practitioner on the council.

"It is such an honor to represent nurses and other cardiac clinicians throughout the state in this capacity," said Langston.

The council meets several times a year for formal meetings as well as attends an annual legislative conference in Washington, D.C. The members have an impact on health care policy on a national and state level.