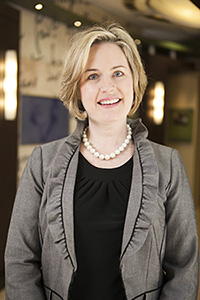 Aimee Chism Holland, DNP, WHNP-BC, FNP-BC, RD assistant professor in the University of Alabama at Birmingham (UAB) School of Nursing has received the Association of Women’s Health, Obstetric and Neonatal Nurses (AWHONN) 2014 Award of Excellence in Community Service for her dedication to improving the lives of women and newborns through community service.

The award was presented at the AWHONN national convention in Orlando, Florida.

AWHONN presents its Award of Excellence in Community Service each year to an AWHONN member with an outstanding history of individual contributions to promote women’s or newborns’ health in a community and reflects AWHONN's mission and standards through their work in the community. Winners have made contributions to women’s health, obstetric and neonatal nursing and women’s health.

“This award reflects those who inspire me to serve: the patients who trust me with their care, the students who aspire to be women’s health nurse practitioners, and the faculty of the UAB School of Nursing,” Holland said. “It is an honor to receive this recognition from AWHONN.”

Holland is coordinator of the dual adult-gerontology primary care and women’s health nurse practitioner specialty track at the School of Nursing. In addition to her teaching responsibilities, she maintains a faculty practice focusing on women’s health and primary care services at the UAB Student Health Services Clinic.  Dr. Holland is actively involved as an ambassador for the National Health Service Corps, building on her clinical experiences in on of Alabama’s Federally Qualified Health Centers.

“Dr. Holland’s efforts to provide care for underserved has improved the lives of women and girls in her community,” said AWHONN’s Chief Executive Officer Lynn Erdman, MN, RN, FAAN. “Her work with the National Health Service Corps shows how integral compassion is to nursing.”

Holland earned her bachelor of science and masters of science degrees in nutrition from the University of Alabama; her masters of science in nursing from Vanderbilt University; and her doctorate of nursing practice from the UAB School of Nursing.  She is dual certified as a women’s health nurse practitioner and a family nurse practitioner. Holland has been published in peer-reviewed journals and presents at national conferences in the area of women’s health.

The Association of Women's Health, Obstetric and Neonatal Nurses (AWHONN) is the foremost nursing authority that advances the health care of women and newborns through advocacy, research and the creation of high quality, evidence-based standards of care. AWHONN represents the interests of the more than 350,000 nurses who care for women (throughout their lifespan) and newborns. The membership of AWHONN is at a 15-year high and growing at 24,000. AWHONN's members are clinicians, educators and executives who serve as patient care advocates focusing on the needs of women and infants. A leader in professional development, AWHONN holds the distinction of receiving the Premier Program award by the American Nurses Credentialing Center (ANCC) for innovation and excellence in Continuing Nursing Education (CNE) three times. Founded in 1969 as the Nurses Association of the American College of Obstetrics